If you came across a weed stash that was thousands of years old, would you light it up?

Cannabis is as ancient as the dinosaurs. It’s been used by different ethnicities around the world for thousands of years, playing different roles in different cultures. In Czechoslovakia, a hemp rope dating back to 26,900 BC was discovered a decade ago and was associated with the economic activities of the people at that place in that time. European farmers grew cannabis sativa for rope, canvas, and clothing. On the other hand, farmers in central Asia and Siberia grew cannabis ruderalis as cattle fodder. Ancient India and China used cannabis indica for medical purposes. But did ancient cultures use it recreationally? Researchers couldn’t be sure. However, a recent discovery in northern Asia has proven that indeed the oldies were getting stoned on cannabis, too. 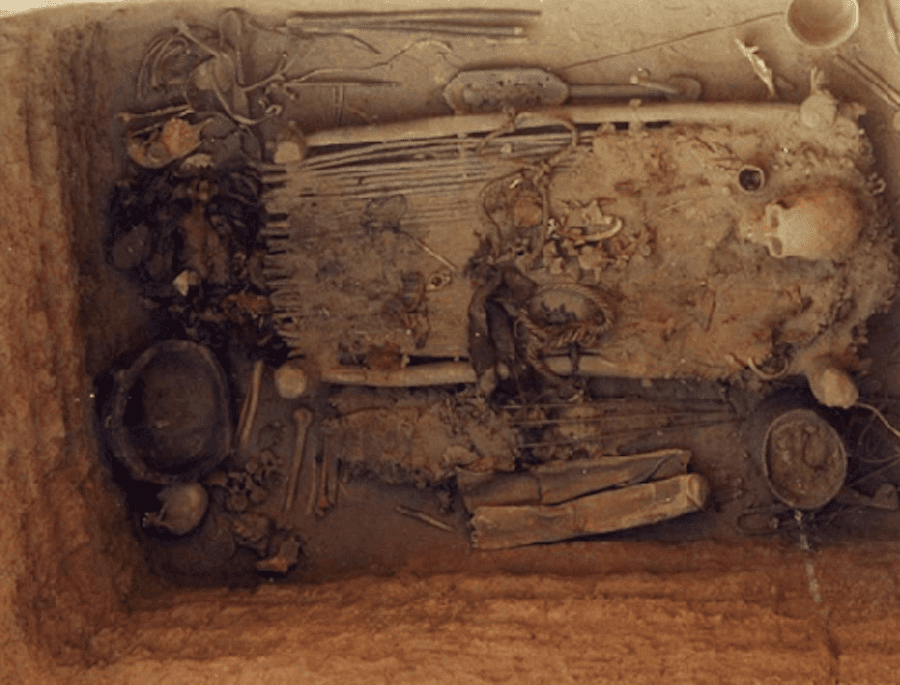 Researchers recently discovered a weed stash in the Yanghai tombs in northern China. A 2,700 year old grave of a light haired Caucasian male, probably in his forties, contained the preserved THC-rich ground bud. Researchers believe that the man must have been a Shaman from the ancient Gushi culture of the Turpan Basin.

Together with the cannabis were other paraphernalia that suggest his shamanic role. People often buried trade tools and religious artifacts with the dead in ancient cultures. These cultures believed that the dead would carry their treasures with them into the afterlife. The dry climatic conditions and alkaline soil play a key role in preserving these. For instance, the weed stash still appeared green, though it had lost the skunk like cannabis odor and taste.

An international team of researchers have studied the 789g of cannabis cache and found that it contains tetrahydrocannabinol (THC), the psychoactive component found in cannabis that differentiates it from hemp. So this was likely recreational cannabis. Researchers have mainly excavated hemp-derived, CBD-dominant cannabis that could be used medicinally.

Were these ancients getting high on weed? According to the lead researcher Ethan Russo, this ancient bud is very similar to what’s around today. In the words of Russo: “We know from both the chemical analysis and genetics that it could produce THC (tetrahydrocannabinolic acid synthase, the main psychoactive chemical in the plant).”

RELATED  Cannabis Museum in Amsterdam Did Not Disappoint

The international team at the Chinese Academy of Sciences Institute of Botany studied the weed stash to determine its contents. They first thought that the ground up substance was coriander. Genetic testing revealed otherwise.

Cannabis contains over 100 identified cannabinoids, though tetrahydrocannabinol (THC) and cannabidiol (CBD) are the most abundant. The two compounds have the exact same number of molecules: 21 carbon atoms, 2 oxygen atoms and 30 hydrogen atoms. But the difference between the two comes from the difference in molecule arrangement.

Moreover, both compounds are similar to endocananbinoids produced in mammalian bodies. Consequently, cannabis’s cannabinoids interact with the endocanabinoid system in a similar fashion. But the unique arrangement of atoms in THC allow it to bind the CB1 receptor and cause the mind altering effects commonly associated with cannabis. CBD on the other hand does not bind to this receptor and cannot cause the typical cannabis high. In fact some studies have shown that CBD can inhibit the mind altering effect caused by THC.

Putting the Tomb (and its Weed Stash) on Exhibit

In this particular tomb, the cannabis obtained was purely female. This sheds light on the reason for cultivating the cannabis in the first place; these people wanted a harvest that was high in THC content. Given the amount of cannabis found in this one grave, it appears that psychoactive cannabis must have played a key role in the life and culture of the Shaman community.

The Turpan Museum in China holds the weed stash. Researchers hope for future excavations to dig up the remains.