American Cannabis Patients Can Still Lose Their Insurance, Their Job, And Their Gun

The federal ban on gun ownership for medical cannabis patients is just one of the injustices people face for their choice in medicine.

Editor’s Note: This Article Has Been Archived. It will receive no more updates.

State medical cannabis access is making headway in the U.S., but it has created problems elsewhere. State laws don’t always line up with federal prohibition, and that’s where things get sticky, and not in a good way. One of the most recent ‘violations of personal rights and freedoms’  focuses on the second amendment: the right to bear arms. Did you know that medical cannabis patients are excluded from buying or owning a gun in America?

Under federal law, cannabis is still classified as a schedule 1 drug, alongside narcotics like LSD and heroin. And these are strict no-nos in every state in terms of the right to bear arms.

Unsurprisingly this has caused a bit of an uproar among Americans.  Dr Matthew Roman, a medical cannabis patient in Philadelphia, took his complaint to court after being denied the purchase of a Smith & Wesson 638 snub-nosed 5-round revolver due to his choice of medicine.

Dr Roman has post-traumatic stress disorder (PTSD), which is one of the qualifying conditions for access to medical cannabis in his state.

Unfortunately, the use of medical cannabis also stops the sale of a gun to Dr. Rowan. Despite the fact that Dr Roman is an upstanding doctor who runs his own medical practice, the Firing Line in South Philadelphia must adhere to federal law. By this law, the shop is required to ask if Dr Roman has consumed cannabis for any reason. An affirmative response means automatic disqualification from purchase. Strangely, no questions are asked about alcohol use.

The other people that can’t buy a gun, aside from medical cannabis patients, include: convicted felons, domestic abusers, those with a history of severe mental illness, and fugitives. But don’t worry – alcoholics can still carry, no problem!

It makes sense that gun sales should have restrictions, but should cannabis be one of these?  Three countries (two of which are the other major North American trade partners) have recognized cannabis as a plant with medicinal and recreational value with low risk for addiction. Not a narcotic. 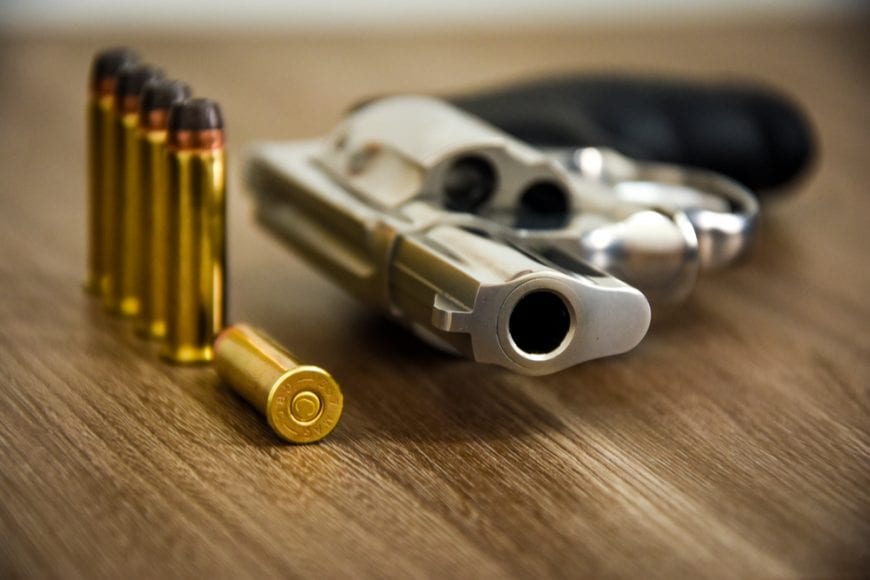 Why Are There Legal Restrictions for Cannabis Patients?

Due to a law in 1968 that prevents cannabis consumers from using or purchasing arms, Dr Roman cannot buy himself a gun. This is a law that is fifty years old, based off racist, classist, outdated cannabis prohibition now used to define what Americans may use to medicate. And the U.S. Court of Appeals agrees that this should continue, as recently as 2016!

RELATED  Are Lungs of Cannabis Smokers Good to Donate?

Roman’s case is simple: medical cannabis patients are restricted from having the same rights and freedoms of other Americans. Despite the ruling in 2016 that claimed the law doesn’t violent the Second Amendment, Dr Roman is taking the case back up and arguing it violates both the Second and the Fifth Amendments.

Regardless of what you think of firearms, it’s tough to argue with the fact that cannabis has a more peaceful effect on patients than alcohol. These are flaws within the legal system that cannabis advocates are starting to question.

What Does The NRA Say About This?

You may think that the National Rifle Association, an advocacy group for gun rights, would be outspoken on this issue. But, they’ve remained surprisingly silent. Based on the fact that the Bureau of Alcohol, Tobacco, Firearms, and Explosives has maintained that under no circumstances should firearm shops sell to cannabis users, it’s possible that the NRA’s silence is because it is anti-cannabis.

A recent NRA PSA would verify that assumption for you. Last Week Tonight with John Oliver did a bit on this in spring 2018. The PSA went something like this:

“Hidden beneath a dense canopy of deciduous trees is a prostitute of sorts,” the NRA PSA says. “And those who profit by selling her will stop at nothing to exploit her. Sold and promoted for her non-addictive, even medicinal advantages, what lies behind the veil of this seductress is far different than what she first appears to be. She is a harlot and her name is Mary Jane.”

To this, Oliver responded,  “I didn’t think this was possible, but I think that guy just slut-shamed marijuana.”

So, I’m guessing the NRA is not stepping up to advocate for the second amendment rights for Americans that are prescribed medical cannabis.

Other Consequences of Using Cannabis Medicine:

Life Insurance Premiums Will Go Up

The news just gets more bizarre for American medical cannabis patients. Your insurance costs could go up, or the company could cancel. Those who do not consume often are okay, but those who use daily (read: PATIENTS!!), see their rates change.

RELATED  Researchers Warn There is No Safe Level of Alcohol

Despite the fact that cannabis will cost Medicaid and Medicare considerably less than conventional opioid medications, your health and life insurance will probably go up when you get your ‘green card’.  This is because daily use puts you in the ‘higher risk’ category.

The law requires life insurers to ask if you take cannabis – it’s just part of the job. On the other side of premium increase, if you have a more progressive insurer that pays for medical cannabis, you also want them to know; it could save you a fortune.

Lying about it isn’t your best option either. Life insurance companies can demand drug tests on new policy owners, which will catch you anyway. Even if you’ve not taken cannabis for two weeks, THC continues to show up in your blood stream for roughly 28 days.

You can lose your insurance if the company catches you lying.

It depends on your long-term care plan under the Affordable Care Act (Obamacare). If you do have a private plan under the ACA, then your consumption shouldn’t come up. The law does not require insurers to ask about cannabis. The law also does not allow health insurers to use this as a reason to raise your premium.

If you don’t know, there are only five traits that can change your policy price. These are location, tobacco use, age, the number of policy holders on your plan, and the design of your policy.

However, before you let out that breath of relief, short-term plans that don’t fall under the ACA’s guidelines may not offer as much protection. Companies with these plans can ask about medical cannabis consumption and can use this information to raise premiums.

Unfortunately, Donald Trump’s shifting regulations around healthcare are opening the door for more private short-term non-ACA insurers. He’s opening up the gates for cheaper plans that do not cover as many conditions or prescriptions as Obamacare’s.

RELATED  CBD Oil and Drug Tests: Can You Still Fail If It's Hemp Oil? Maybe

Now, this is important: the lower dollar sign may be appealing at first. However, if you’re a medical cannabis consumer, have a pre-existing condition, or care for dependents, that lower cost now may cost a ton in the future.

You Can Still Lose Your Job For Testing Positive for THC

Any resident employed in a job with safety regulations faces drug tests. This includes those in transportation and construction, who must often to choose between medical cannabis and their job. This is particularly true of any employee who works for the Department of Transportation, which, back in October 2009, made it abundantly clear that they would not hesitate to drug screen all their employees in the air, on the ground, and on the sea.

Federal regulation prohibits all use of cannabis. This means that the law does not protect people fighting insurance issues or employment policies. Any employer could easily use this federal ban to support their decision to fire an employee.

This all goes back to insurance. If an employer allows employees in dangerous or risky situations to take cannabis, their insurance may not cover claims.

Federal prohibition is in serious need of updating. This especially reconsidering the impact this century-old stance on cannabis has on the individual rights of Americans. Medical cannabis restricts your right to employment, the second amendment, and insurance. So, is America really the land of the free?