Archeological evidence for ancient cannabis used as an anesthetic (and more) has been found!

Confirmed: Weed has a history as old as medicine itself. The recent discovery of a special 4,000-year-old skull from the Ingul catacomb culture has lit up anthropology circles as the most likely analgesic would have been cannabis. It suggests that humans have been consuming ancient cannabis to treat their aches and pains since the very beginning.

The skull is special because it carries proof of a primitive form of brain surgery. It has two near-perfect holes drilled in its back. Researchers believe that this kind of surgical procedure, known as trephination, was probably used as a way to get rid of headaches, cure epilepsy, or ameliorate some other condition.

How could early man withstand that kind of pain? The obvious answer, folks with PhDs say, is through natural herbs, such as mushrooms and cannabis.

When Surgery Goes to Your Head

The skull comes from what scientists believe is a warrior who lived during the Middle Bronze Age, around 2,000 B.C.E., in what is today Moldova. And while the surgical aspect is interesting on its own, in a macabre sort of way, it’s what the surgery implies that’s more fascinating.

The real interest in the skull is the question it raises surrounds the pain the comes with two holes drilled into the skull with primitive instruments. There were no anesthetics (as we know them, at least) 4,000 years ago. It was a surprise to find that early man even contemplated surgery of this sort. And, not just surgery, but healing too. The shape of the holes implies bone healing. The man recovered from both primitive attempts at brain surgery and lived to tell the tale.

Since that man’s life, brain surgery has progressed exponentially. But pain medication? That’s a different story.

In the primitive world, society respected plants with healing powers treated these with a sense of awe. These were divine gifts to help mankind; proof of the Creator. But at some point, our relationship to natural healing changed. Instead of continuing to take cannabis, we abandoned it in favor of synthetic pain relievers.

The change signaled an abrupt shift in medicinal evolution. Instead of progressing from its roots, modern science forked onto a single, isolated branch and moved on from there. Research on cannabinoids was left largely untouched until the 1990s, when scientists discovered the endocannabinoid system within the human body.

Think of how far we could have come if we’d been working with cannabis that whole time.

Ancient Cannabis Across the Globe

The caves in Moldova aren’t the only place we see suggestions of ancient cannabis consumption.

In his book Seeking the Sacred with Psychoactive Substances, J. Harold Ellens provides case studies of many cannabis remnants found in burial sites and tombs first created more than 2,000 years ago.

In the Yanghai Tombs of ancient China, archaeologists found a mortar and pestle set with flecks of fossilized cannabis stuck in it. The find, located in the burial chamber of a medicine man and shaman, suggests that weed has long been used for its healing powers. Before his death, the ancient physician had ground hemp in his apothecary to dole out to patients, in much the same way that people take CBD today.

Ancient peoples relied on weed to cure the mind, body, and spirit — three things that were bound much more closely in the minds of the ancients than they are today. The practice of shamanistic rituals with mind-altering substances was probably equal parts religious and medicinal.

And it works the other way as well. Taking magic mushrooms and cannabis, and engaging in tribal dancing was probably enough to alter the consciousness of a patient enough to perform surgery. 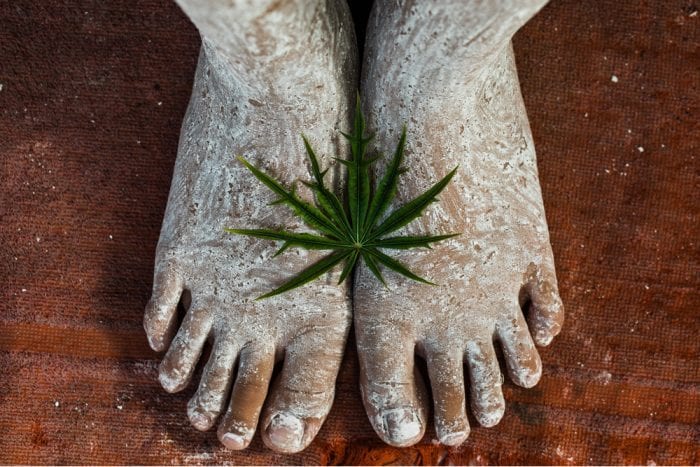 When Did It Stop?

Here’s the million-dollar question. If cannabis was so great and used for so long, why did we end up outlawing it?

What you have to remember is that cannabis has been illegal for only a very short part of its history with human civilization. It seems that since humankind first discovered the herb’s therapeutic effects, we used it to heal both body and mind. But, then eventually, we banned it.

Why? It’s tempting to say that the government banned weed because of crude scientific misunderstandings and emerging religious fanaticism. But that’s not entirely accurate.

For one thing, we lost many herbal remedies as humans transitioned into modern farmers. Certainly, the advent of lab-made medicine began to edge people away from traditional herbal cures. This is especially true as ancient cultures tied traditional medicines to allegedly “primitive” superstitions. As those early religions faded, the medicinal practices of increasingly colonized cultures became taboo.

But outlawing cannabis was never really about homage to a true deity or eschewing old ways. It was — and is still — about control.

The field of anthropology is based on the notion that we can learn a lot by studying our ancestors. Understanding how ancient cannabis helped with surgical recovery is just one more way we’re re-learning what authorities told us to forget.