Medical cannabis for arthritis is under heavy research and this is the latest, great news.

Legal cannabis is becoming a reality for more and more patients around the world. And with this, a freedom to choose the medicine that best works for the individual. Decades of studies have sought to uncover how cannabis interacts with the endocannabinoid system to help manage symptoms of disease. Significantly, medical cannabis for arthritis has been officially recognized by the America Arthritis Association following a 2019 survey of 2600 arthritis patients. It revealed that seventy-nine percent were already using CBD or cannabis to manage inflammation and pain.

Importantly, there are many surveys and reports that outline the potential benefits of cannabis for various conditions, including: insomnia, multiple sclerosis, cancer treatment, chronic pain, anxiety, ASD, and arthritis.

Arthritis is a debilitating and chronic condition that results in pain and stiffness within the joints of the body. Significantly, there are two forms of arthritis, but cannabis has shown help for both.

Osteoarthritis is the most common type of arthritis. Cartilage breaks down within joints, causing bones to grind and rub. The pain occurs most commonly in feet, knees, lower back, hips, and fingers.

Rheumatoid arthritis, on the other hand, is an autoimmune condition wherein the immune system attacks tissue in the body, mainly at the joints. It destroys the lining of joints, resulting in inflammation and thickening of the joint capsule.

While arthritis cannot be cured, there are several common pharmacological interventions, including opioids, nonsteroidal anti-inflammatory drugs (NSAIDs), hormone therapy, analgesics, disease-modifying antirheumatic drugs (DMARDs), and corticosteroids. And then there is medical cannabis for arthritis.

We often use the term ‘medical cannabis’ as a way to distinguish prescription versus recreational consumption. However, all cannabis is medicinal. The word ‘medical’ does not make cannabinoids, terpenes, and flavonoids more effective.

Since 2006, scientific studies and trials have shown the potential of cannabis and cannabis-derived medicines as a treatment for arthritis symptoms.

One study, published in the journal Rheumatology (2006), [1]DR Blake, P Robson, M Ho, RW Jubb, CD McCabe. Preliminary Assessment of the Efficacy, Tolerability, and Safety of a Cannabis-Based Medicine (Sativex) in the Treatment of Pain Caused by Rheumatoid … Continue readingfocusing on the cannabis medication Sativex, found that patients showed reduced inflammation and significantly improved pain when taking Sativex. Other studies have also seen the potential for cannabis to improve sleep, reduce joint pain and inflammation, and suppress disease activity with mild side effects.

In 2021, the same publication released an update [2]M Guillouard, N Authier, B Pereira, M Soubrier, S Mathieu. Cannabis Use Assessment and its Impact on Pain in Rheumatologic Disease: A Systemic Review and Meta-Analysis. (2021). Rheumatology … Continue readingfollowing a review of systemic literature ending in June 2020 for cannabis and pain management for rheumatic disease, including arthritis and fibromyalgia. Out of a cohort of 10,873 patients, 2900 consumed cannabis to manage their symptoms. Most patients smoked and this reduced pain. It’s important to note that even all of these years later, cannabis is a self-therapeutic medicine that has not been thoroughly study for treatment of arthritis.

RELATED  Can CBD Replace Ibuprofen As A Painkiller?

What about CBD for Arthritis Pain Relief?

There are positive results in animal studies demonstrating that CBD may have anti-inflammatory and pain-relieving properties. Unfortunately, substantial human clinical trials are not complete. The most recent and considerable review, published in 2017, [3]National Academies of Sciences, Engineering, and Medicine. 2017. The Health Effects of Cannabis and Cannabinoids: The Current State of Evidence and Recommendations for Research. Washington, DC: The … Continue readingconcluded that there is, “substantial evidence that cannabis is an effective treatment for chronic pain in adults.” There were not, however, any reported outcomes for CBD specifically.

One of the key areas of difficulty for researchers is dosing. Each chemovar of cannabis has its unique ratios of cannabinoids and terpenes. Inside that are differences that exist due to growing conditions. It is very difficult to conduct research without a consistent, repeatable dose. This is why science ends up using pharmaceutical cannabis products such as Sativex and Epidiolex. It’s not ideal and it’s not a reliable representation of real world cannabis consumption.

How Medical Cannabis for Arthritis Works in the Body

Cannabis contains several chemical compounds with medicinal potential. The most researched are the cannabinoids, THC and CBD. These interact, to different degrees, with cannabinoid receptors within the body: CB1, CB2, and the recently discovered CB3. Importantly, these are the key receptors for the Endocannabinoid System.

CB1 receptors are in many places throughout the body and are “distributed throughout the central and peripheral nervous system”, according to the Journal of Headache and Pain (2018).[4]EP Baron, P Lucas, J Eades, O Hogue. (2018). Patterns of Medicinal Cannabis Use, Strain Analysis, and Substitution Effect Among Patients with Migraine, Headache, Arthritis, and Chronic Pain in a … Continue reading

CB2 is primarily found in the immune system, as well as within lymphoid and immune tissue. And CB3 concentrates in the testes, speed, brain, and small intestine. 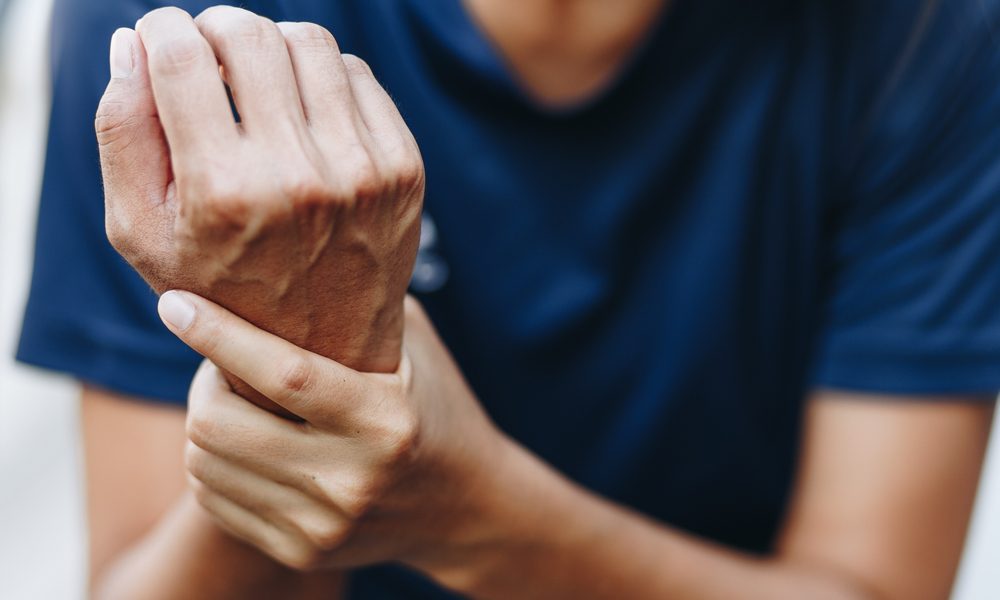 What about THC for Arthritis?

THC directly interacts with the CB1 and CB2, meaning it is an agonist of these cannabinoid receptors. The activation of CB2 acts to decrease cytokine production and lowers immune cell mobilization, including release of cytokines and cell migration of neutrophils and macrophages.

Another mechanism through which THC may relieve pain is by stimulating the production of opioid hormones such as beta-endorphin and proenkephalin in areas of the brain responsible for pain processing.

A recent animal study also showed that CBD might be able to significantly reduce the chronic inflammation of arthritis by targeting specific glycine receptors. It does this by enhancing the expression of α-GlyR, which mediates glycinergic cannabinoid-induced suppression of chronic pain and inflammation.

What is the CBD Dose for Arthritis?

CBD can be taken as an oil, edible, cream, or in an inhalable form (vape or hempette). Once swallowed, CBD is processed by the digestive system. This means absorption is slow and dosing is unpredictable. One way to ensure that more CBD gets into the bloodstream is to take an oil sublingually (under the tongue). Additionally, when CBD is taken with a healthy fat, such as avocado, the absorption rate is increased.

While there is little clinical evidence that CBD can reduce swelling in joints, when applied topically, there are many positive anecdotal reports. Salves and creams are often made with soothing ingredients, such as camphor, that will also have a positive effect on painful joints.

Finally, inhaled CBD, whether through vaping or smoking hempettes, are fast acting. It should be noted, however, that the incomplete combustion of organic material invariably creates toxic and carcinogenic byproducts. Ideally, cannabis patients should choose another method of consumption.

Unfortunately, there are no guidelines at this time, but these are coming. The key advice is to start low and go slow. Typically patients start with 1mg(mL) and titrate up over time. Most people can tolerate 0.5mg/mL increase every four days. The Arthritis Foundation recommends that once you find a dose that provides relief, continue taking this amount twice daily.

If you are in a legal region, THC may also help pain management. It’s best to try out the dosing for THC when you are at home and there are no expectations on you for the next four to six hours.

If you do not feel relief after several weeks of a cannabis trial, it might not be the right wellness benefit for you. Please make sure you speak to your doctor about trying medical cannabis for arthritis. And do not stop taking other prescriptions, except as recommended by your physician.

How Long Does it Take for CBD Oil to Work for Joint Pain?

Some people feel relief from pain and inflammation straight away. Others will have to experiment to find the right dose and ratio of THC:CBD.  Measurable changes may take a few days, but like all medicine, medical cannabis for arthritis may not be right for you. 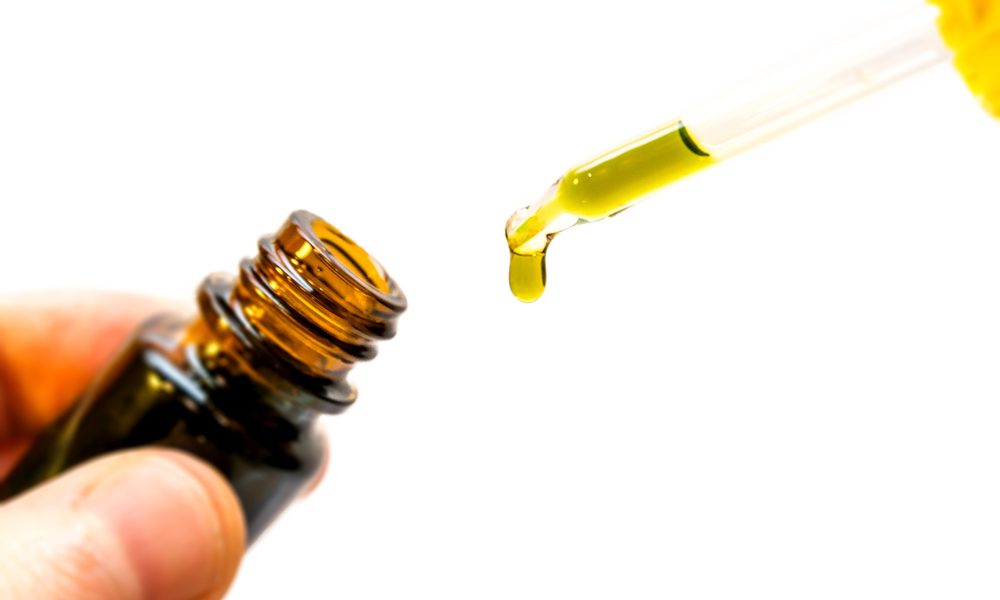 CBD, also known as cannabidiol, can interact with other medications. This is because it uses the same liver pathways. Methotrexate, a prescription used by many rheumatoid arthritis patients, is one of these potential contraindications.

The liver metabolizes both CBD oil and methotrexate, with the help of cytochrome P450 enzymes. What does this mean for you? It means that, depending on timing of intake of medicine, methotrexate could either inhibit or enhance the action of CBD.

This is why it is important to speak to your doctor before trying medical cannabis for arthritis. Your physician will be able to give good advice on timing of other prescriptions and help you find the right CBD dosage for you.

According to anecdotal reports and reviews, cannabis is a hopeful option for arthritis patients. In combination with existing prescriptions, cannabis may improve symptoms of inflammation and pain. Further research is needed in order to determine if cannabis is a viable treatment for arthritis, but the results from animal studies make that study very promising.
EDITORIAL STANDARDS
REPORT AN ISSUE

CBD Use Is Common For More Americans Than Ever