Benefits Of Hemp Recognized By Bees

Insects lack CB receptors so how can bees see the benefits of hemp?

Spring brings budding trees, the songs of birds, and chubby bees buzzing from flower to flower. But, if you keep a close eye on where those bees travel, it seems they may be reaping the benefits of hemp.

While they certainly will not be using hemp for rope, hempcrete, and paper like humans do, the authors of a recent study published in Biomass and Bioenergy say bees find their own unique benefits of hemp.

Another paper published in PLoS One outlined in 2015 showed that bees seem to have a keen talent for sniffing out cannabis. In it, Schott et al. looked into the alternatives to increasingly obsolete drug-sniffing dogs as cannabis laws relax. They found this hidden talent in our bumble friends.

The researchers found was that Apis mellifera, the common honeybee, may be able to detect certain drugs. In fact, they could do it so well that the researchers suggested that the honeybees could replace the work of drug-sniffing dogs. 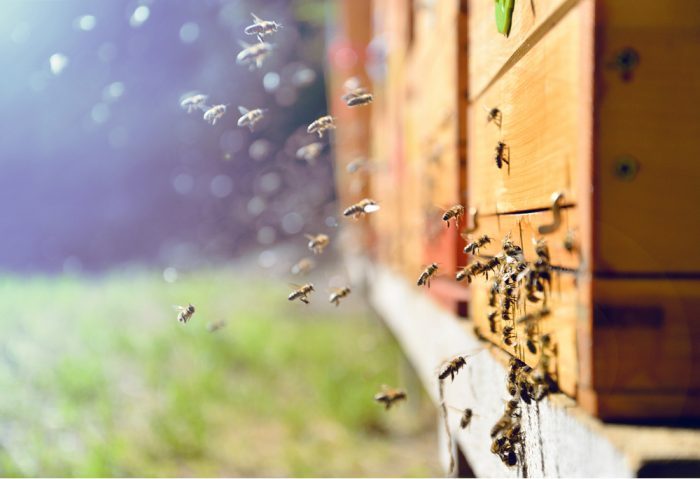 Can Bees Really Benefit From Hemp?

However, what we’re focusing on here is the bee’s ability to smell out certain compounds. It’s an important part of their physiology. But how does it actually benefit the bees themselves? Do bees have an endocannabinoid system that helps them experience the benefits of hemp?

This is a far more fascinating question than one might realize. In the field of comparative biology, there is only one type of neuroreceptor missing in insects that are present in mammals: cannabinoid receptors (CB receptors).

The researchers of a 2001 study published in The Journal of Comparative Neurology, hypothesized that insects may have lost their CB receptors because they don’t produce enough arachidonic acid. Arachidonic acid is the acidic precursor to endocannabinoid ligands such as 2-AG and anandamide.

Since insects don’t seem to be able to consume cannabinoids and reap all the benefits, why would they ever visit a hemp field? O’Brien and Arathi decided to try to answer this question.

RELATED  A Little Something Called Chili-Con-Canna-Queso

The researchers found 23 different species of bees harvesting pollen from the hemp fields in northern Colorado. This was during a time that “coincides with a dearth of pollinator-friendly crop plants in the region, making hemp flowers a potentially valuable source of pollen for foraging bees”. Simply put: they love the pollen when they need it the most.

Since bees appear so keen to forage for pollen from hemp, it may be possible to develop an integrated pest management solution for hemp production that includes bees. 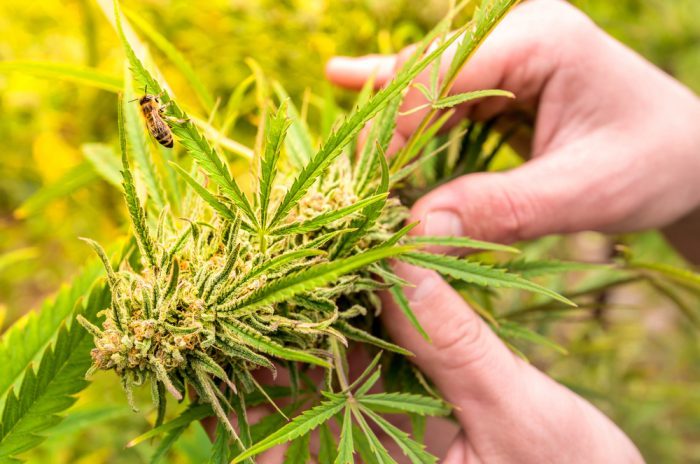 Can Bees Help Provide Us With The Benefits Of Hemp?

Although the federal government recently legalized hemp farming, its production is isolated to its own sector. That is, most crops require the use of herbicides, pesticides, or other compounds to ensure maximum yield. However, according to The New York Times Magazine, hemp farmers aren’t allowed to put such compounds on their crops.

Luckily, it seems that hemp is a crop that doesn’t need such invasive methods of care. In fact, the most intervention these crops may need is a cadre of beehives foraging for pollen from their flowers.

Since bees are so good at detecting cannabis, have such an affinity for its pollen, and provide a non-invasive means for hemp care, it seems they play an integral role in hemp production.

In one way, it’s also another one of the many benefits of hemp. If hemp doesn’t need volatile compounds like other monocrops, then the flora and fauna of the region will suffer fewer negative consequences.

Furthermore, there’s a bee trainer in Spain who found a way to train bees to create THC-laden honey. While most bees make their honey through the nectar they collect, Nicholas Trainerbee, trained his bees to chew off resin and process it into propolis, which is a waxy substance that’s been touted to produce a range of benefits. The heat of the hive activates the THC over time. It is a precious substance that is produced in quantities so small, that production and sale would be impossible. Trainerbee reports that he saves the infused propolis for special guests and friends.

So, if you’re looking for the benefits of hemp, bees may help you pollinate it and make infused bee by-products. It’s just an added benefit that they’re a part of the joy of spring.