Our continued progress as a civilization may depend upon a journey of humble self-improvement at the individual level. And in a world of rampant consumerism, that starts with evaluating our own consumption habits. One way to start? Ensuring that our cannabis comes from clean, ethical, and blood free sources – and not off the back of someone else.

In a globalized society with an unequal distribution of wealth, the idea of ethical consumerism is more important now than ever. Whether it’s the coffee we drink, the clothes we wear, or the cannabis we consume, many are beginning to take notice of the broader consequences of spending habits.

The History of Ethical Consumerism

The idea of ethical consumerism began gaining traction in the early 1990s. First popularized by a British magazine named Ethical Consumer in 1989, it quickly gained the attention of mainstream media and business commentators.

It presented the launchpad for the concept of Fair Trade to take hold and inform consumers of the broader implications of purchasing choices. Ethical consumerism continues to grow. It was once only a thing in forward-thinking communities dotted around the globe. Now, however, the idea of paying a premium for a clean product is something that many are willing to undertake to help their fellow humans.

When it comes to cannabis consumption in legal jurisdictions, craft cannabis serves that ever-increasing demand. But in those countries where cannabis still remains illegal, much of the cannabis consumed comes tainted.

It seems that everywhere cannabis remains illegal, it attracts criminals who gladly fill the void and serve the seeming global need for it.

Dangerous drug gangs and cartels battle between themselves, governments, and other authorities; they threaten suppliers and the public alike, and often sell low-grade cannabis on top of that. In fact, some truly horrifying acts occur to ensure the availability of cannabis in places where it remains illegal. For example, in countries like Ireland, much of the cannabis comes from Chinese triads who force trafficked workers to grow sub-par cannabis in grow-houses around the country.

Much of the profit from cannabis consumption around the world ends up in the hands of criminals. A report published by the European Monitoring Center for Drugs and Drug Addiction (2019) reported that EU cannabis sales netted $13 billion for criminal gangs in 2017.

RELATED  The Best Cannabis Chemovar For Every Climate

Such markets are likely to continue so long as cannabis remains illegal. It makes ethical consumerism all but impossible for the majority, as those buying on the streets have little say in the quality of their cannabis. They also inadvertently contribute to the battles that play out behind the scenes at the hands of criminal gangs.

The Birth of Blood-Free Cannabis in Mexico

Mexico is a country repeatedly tarnished by the media for the acts of its cartels. But in a surprising recent development, something of a renaissance in ethical, blood-free cannabis, is underway.

Cannabis was traditionally the “cash crop” of Mexican cartels. But recent legalization waves in the U.S. mean that this market has become much less lucrative. With the Cartels’ focus now on other illegal drug markets, like heroin, cocaine, and methamphetamine, a new wave of independent farmers is coming. These growers produce quality, blood-free cannabis, that bypasses the cartels in the supply chain.

As Mexico prepares for the legalization of cannabis—likely at some point in 2020—this development brings some much-needed respite to a topic all-too-commonly associated with bloodshed.

Not of Interest to The Cartels – For Now

These farmers grow their cannabis with the blessing of the cartels, and the plan to become legal growers once the government allows it.

With this comes higher profits for them to reinvest into improved equipment, and to serve an ever-increasing demand. But for the farmers, growing is the easy part. Working outside the pre-existing distribution structures of the cartels, they must now move the product themselves, and take on associated risks.

For the time being, cannabis remains technically illegal in Mexico. This means that should these small “ethical” farmers become profitable; they’ll likely receive some unwanted attention from cartels looking to capitalize yet again on the cannabis market.

But, when legalization does finally occur in Mexico, blood-free cannabis will hopefully become the norm. 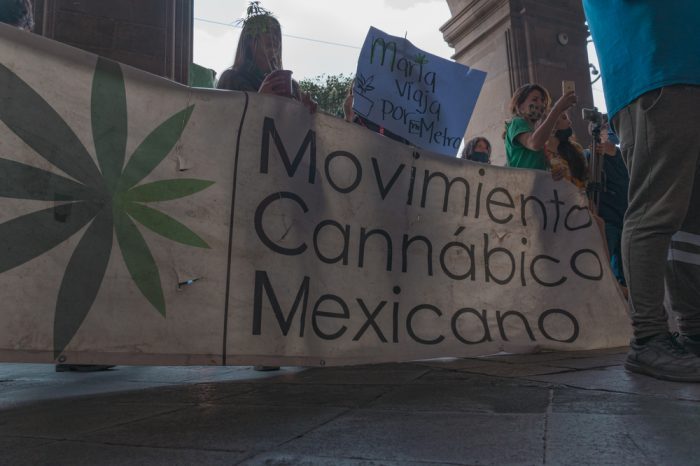 Why Should we Care About Blood-Free Cannabis?

Jurisdictions where cannabis remains illegal and under the control of violent criminals only serve to further stigmatize the plant. They also reinforce the idea among the wider public that certain plants should remain illegal to possess and consume.

But the advantages of blood-free cannabis extend far and wide. Local producers gain control over their businesses. They then don’t have to give in to the cartel middlemen who combine low prices and threats. Then there’s the idea that cannabis marketed as blood-free or ethically produced will actually sell better than brick-weed. At the same time, it heightens public awareness to help shift cultural attitudes in a healthy direction.

It also empowers those who aren’t motivated solely by profit to get involved. Cannabis use, after all, has a legacy culture that’s worth preserving. It’s tragic that such a healing herb can inadvertently contribute to real crime. Thankfully however, it’s something we can all help change, one purchase at a time.