Hashishene: The Terpene Only Found In Hash

Bubble hash, Charish hash, potent Royal Afghani hash, originate from across the globe but they all have this one thing in common.

Have you ever wondered what it is that gives hashish that distinctive medicated effect? It seems there’s a lot more to it than simply being a more potent trichome-infused medicine. Whether it’s bubble hash or a brick of hash, Mother nature works on terpenes that oxidize in the sun as part of the drying process in hashish-making.

Ever wondered why those southern Europeans have that free-flowing spirit? They just seem to take life a little less seriously than the rest of us. Walk through any Andalusian village in the south of Spain and you’ll feel it pretty quickly. While most assume it’s solely the Mediterranean climate, there was something else that infiltrated the culture some centuries ago that may have influenced things.

The Spanish got a taste for Moroccan hashish. A steady supply made its way from the Rif mountains in northern Morocco through the port of Tangier, bound for Spain. The Spanish encouraged it to keep the peace, and it helped maintain the economy back in Morocco. And once in Spain, that Moroccan hashish began to spread throughout Europe.

The Rif Mountains in Morocco provided high-quality hash to the people of Spain.

Fast forward to 2014 when the French authorities confiscated some of that same Moroccan hashish. They gave it to academics at the University of Nice Sophia Antipolis. They were attempting to try and develop a device that could detect the presence of cannabis without canines. Instead they found something rather different — a new terpene. Their findings were published in a study detailing the presence of a new unpronounceable compound known as 5,5-dimethyl-1-vinylbicyclo[2.1.1]hexane. Large amounts of up to 14 percent were found in hashish samples. But, very little was found in dried flower.

As it was unique to hashish, they called it hashishene, and then began the search to uncover why it existed at all. That search would eventually lead them back to Morocco.

They found that the terpene beta-myrcene actually degraded to hashishene when exposed to light and oxygen. And it was the rooftop exposure to that strong African sun in the preparation process that helped oxidize the beta-myrcene.

The researchers were also able to conclude that many of the minor terpenes found in the cannabis plant are in fact oxidized versions of the principle terpenes. Examples of those principle terpenes include myrcene, pinene, linalool, caryophyllene, and humulene. Not a bad result for a study that started out with the intention of retiring canines! 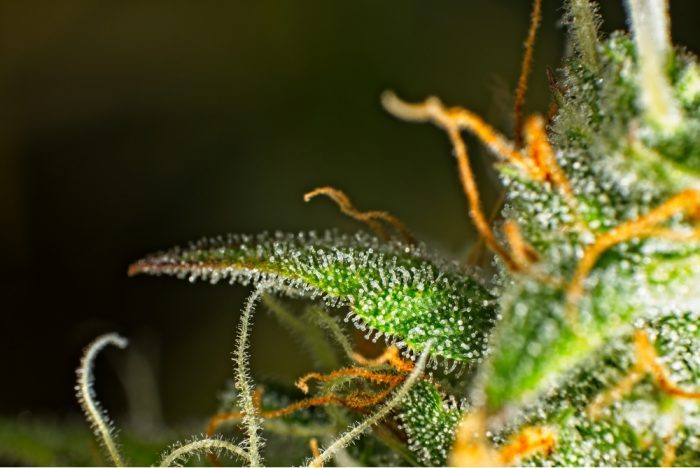 Hashish itself is derived from “kief,” or the dried resin of the un-pollinated female flower. These resin glands are known as trichomes and are the potent source of the plant’s medicinal compounds, as they hold the cannabinoids and terpenes. Hashish is produced by a variety of methods such as mechanically beating the plants to knock off trichomes. Alternatively, manufacturers can submerge the buds in icy water, and then use small sieves to remove the trichomes. This second method leads to what is known as Bubble Hash, a premium solvent-less concentrate, which is making a comeback.

When dried and cured bud is exposed to cold temperatures, like icy water, trichomes then detach from the flower. These are then filtered through a series of screens, leaving you with a potent concentrate.

The beauty of Bubble Hash is that the only solvent is icy cold distilled water. It’s a simple process, requiring only patience and some meditative labor! Here are the steps you’ll need to follow:

There are several ways to consume your Bubble Hash.

Edibles are a discrete way to medicate. Bubble Hash can be sprinkled on food or added to teas or chocolate. Just be mindful that it’s potent stuff and you shouldn’t need much.

Bubble Hash can also be smoked, whether in a pipe or bong, or perhaps added to ground cannabis flower in a joint. For those who really want to turn on the rocket boosters, then you can take things a step further and make moonrocks with your Bubble Hash.

Sometimes we forget the ease by which we can access that deeper, more tranquil existence within us. While we can’t all relocate to southern Spain, we can at the very least dip our toes into the world of hashishene, before sitting back and taking a breath to connect.

Myrcene Is So Much More Than The ‘Couch Lock’ Terpene