Kratom is almost as unwelcome as cannabis in much of America, and if the FDA has its way, kratom will become a Schedule I narcotic with no medicinal value. Will this lack of access harm opioid addicts?

The opioid crisis in the United States is out of control. Millions of Americans are dying every year from complications, and millions more are living with addiction. While politicians frequently pay lip service to the situation, real policy solutions have been slow to materialize. In place of official remedies, everyday citizens rely on their own ingenuity, attempting to find alternative treatments and ways to wean addicts off the substance that is destroying American communities with abandon. Is Kratom for pain one of these solutions?

Toward that end, two plants have risen through the noise of social media and word of mouth to take on the opioid epidemic: cannabis and kratom. Both are natural, plant-based solutions. Each has psychoactive properties and virtually no possibility for overdose. Both are fighting for legality. Both have ardent supporters and radical detractors. Many of these claim these no better than the pharmaceuticals they’re replacing.

But for all their similarities, cannabis and kratom are vastly different.

What do we Know About Kratom for Pain?

Kratom comes from an evergreen plant in the coffee family. That means it’s a stimulant, instead of a depressant, like cannabis. It’s been used for centuries by the peoples of Southeast Asia for mood enhancement and pain relief.

But, while cannabis legalization is on the upswing, kratom has a downward trajectory. Cannabis is illegal at the federal level, but has been getting a second life in lawfulness thanks to the states. Conversely, kratom remains legal at the top levels, but has been banned by six states (Alabama, Arkansas, Indiana, Tennessee, Vermont, Wisconsin and Washington, D.C.).

The Food and Drug Administration released a statement in February 2018 declaring they find no medicinal value in Kratom. It was a step in the agency’s continuing efforts to classify kratom as a Schedule I narcotic. This places kratom in the same category as heroin and cannabis.

Why do the feds have such an issue with kratom? It’s not entirely clear. An analysis in the journal Addiction Biology found that kratom presents a risk for addiction in animals (that has the possibility to be present in human beings). But, a paper in the journal Drug and Alcohol Dependence showed that most users found withdrawal from kratom to be no worse than quitting caffeine or sugar.

The cynical reason for the government’s distrust of kratom is probably akin to its views on cannabis. The plant is a cheap and effective replacement for many drugs that bring in large profits for the pharmaceutical industry. Specifically, kratom and cannabis are now threatening to replace opioids — and cure opioid addiction. That puts politicians in the tenuous position of choosing between constituent health and donor largesse. Instead of a decision, they follow the classic “not enough information” playbook, effectively skirting the issue.

Kratom and Cannabis – What we Know so Far

Here’s what we do know: Both cannabis and kratom have plenty of anecdotal evidence to show they can be effective methods to combat opioid addiction. Unfortunately, there have also been a number of deaths associated with kratom. The FDA claims this number to be 36, but kratom advocates point out that other substances that could have caused death were also present in the victim’s bodies. And it’s also hard to say if 36 deaths out of millions of users, over a number of years, is statistically significant.

Both kratom and cannabis are subject to tolerance issues. This means the body becomes accustomed to them and more is needed to provide the same effect. It’s important to note, however, that cannabis will maintain its medicinal effect at therapeutic dose. That’s even as psycho-active effects diminish. Unfortunately, kratom will lose effectiveness and medicinal benefit at tolerance levels.

Additionally, kratom withdrawal can be difficult (but, to be fair, it’s still very mild).

Kratom affects the brain in much the same way that opioids do. Cannabis, being a depressant, functions differently. Both affect the dopamine system, but cannabis does so by stimulating cannabinoid receptors. On the other hand,  kratom mimicks natural neurotransmitters and tricks the brain into releasing more pleasure chemicals. 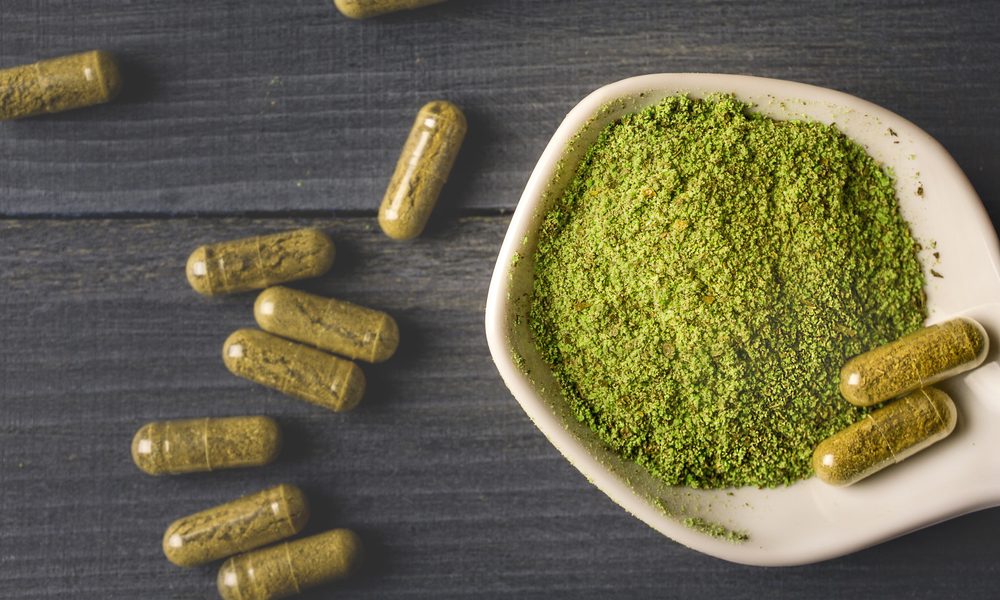 Does this Kratom for Pain Help Opioid Addiction?

What does this mean for addicts? It’s not clear. As part of its ongoing efforts to reschedule kratom, the U.S. government has slowed down research into the drug and its effects on the body. So, while many people claim that kratom has helped their addictions, the scientific understanding of why and how are still murky. Of course, legalizing cannabis has the power to slow opioid addiction rates in U.S. states. But cannabis research is also woefully behind where it should be.

The bottom line is that the potential exists in kratom for pain to be a singularly effective tool in the battle against opioid addiction, but it may not work as well as cannabis. Unfortunately, neither option is unavailable for many addicts, due to prohibitionist laws.