These are the ways that cannabis may help manage the side effects of chemo and cancer therapy.

Chances are that most people reading this article know someone who has been affected by cancer. While medical advances can offer many more treatment options, the symptoms of the cancer therapy can still be debilitating – but cannabis may help.

Cannabis reform is slowly but surely gaining traction, with thirty three states legalizing medicinal cannabis. Illinois’s recent legalization now makes eleven states with fully legal recreational consumption. And cancer is one of the major reasons that cannabis legalization is receiving such a groundswell of support. Cannabis has the potential to support conventional cancer therapies by managing a range of symptoms.

Chemotherapy and radiation are the most common cancer therapies. Though these offer the promise of a cure for many, the side effects of treatments can be extremely difficult to manage. There is evidence that cannabis may help to ease some of these side effects as a supplementary medicine.

Nausea and vomiting are common side effects from cancer treatments. Around one-half of cancer patients will experience nausea or vomiting, otherwise known as emesis.

Studies have shown that cannabis and THC products may produce an antiemetic effect, reducing nausea and vomiting. One study — published in the British Medical Journal (2001) — concluded that patients found cannabis to be slightly more effective than conventional nausea medication.

Cannabinoid interaction with the 5-hydroxytryptamine 3 (5-HT3) receptor appears to hinder nausea, as its activation seems to play a dominant role in nausea onset. Gamma-aminobutyric acid (GABA) neurons have CB1 and 5-HT3 receptors, where they have the opposite effect on GABA release.

GABA is an amino acid that works as a neurotransmitter in the brain and may induce nausea. So when cannabinoids activate the CB1 receptor, these may neutralize 5-Ht3 activation that causes nausea and vomiting. Cannabinoids may also directly inhibit 5-HT3 gated ion currents through other cannabinoid receptors. This stops 5-HT3 from affecting GABA release.

Cancer Pain May be Helped by Cannabis Therapy

Unfortunately, pain and cancer therapy tend to go hand in hand. Aside from pain caused by the cancer itself, medical tests, including injections, bone marrow aspiration, or surgery can all result in pain for patients. As can radiation and chemotherapy. However, studies show cannabis may provide pain relief to cancer patients through a variety of mechanisms.

RELATED  How To Make Your Own Cannabis Topicals

One study published in the European Journal of Pharmacology (1997), concluded that when the CB1 receptor was blocked, an enhanced pain response occurred. Another study — that appeared in Behavioural Pharmacology (2011) — reported that CB1 and CB2 receptor activators were comparable to the effect of morphine in a tumor pain model.

Much like opioid receptors, brain regions that regulate pain perception hold CB1 receptors. Interestingly, it has been found that cannabinoids may also work to increase the painkilling abilities of opioids.

THC may further enhance pain relief by stimulating the production of the opioid hormones (beta-endorphin and proenkephalin).

The endocannabinoid system helps regulate eating behavior. Studies — like this one published in Pharmacology & Therapeutics (2002) — have shown the ability of THC to increase appetite and improve weight gain/maintenance. CB1 blockers result in the typical feeding increase seen after blocking of cannabinoid introduction.

The lateral hypothalamus contains CB1 receptors. There these are present in orexin- and melanin-concentrating hormone (MCH) containing neurons. These neurons project to dopaminergic neurons in the ventral tegmental area where they then modulate the mesolimbic dopaminergic pathway involved in food reward. So, activation of the CB1 receptor may excite MCH neurons, resulting in increased appetite through the mesolimbic dopaminergic pathway.

GABAergic neurons also block MCH neurons (which may increase nausea), but activation of the CB1 receptors on GABAergic interneurons can reverse this, resulting in increased appetite. 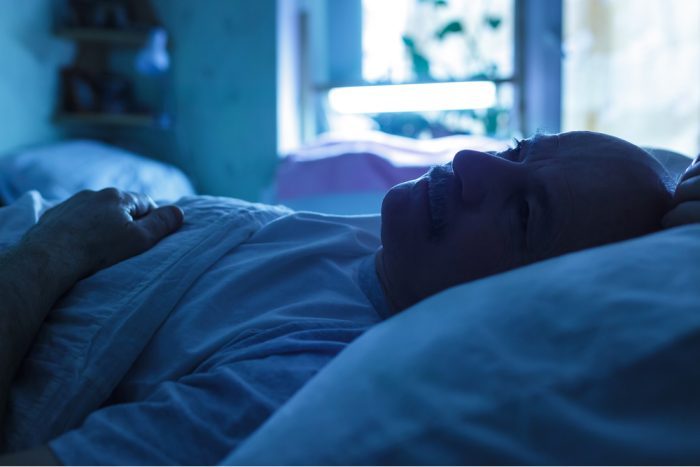 Cancer patients often find they have trouble sleeping. Cancer therapy can cause pain, nausea, night sweats, and anxiety that can all contribute to insomnia.

Studies suggest that the endocannabinoid system may play a crucial role in the modulation of the sleep-wake cycle and the regulation of mood. One study published in Pharmacological Reviews (2008), found that 15mg of THC had a sedative effect, increasing sleep activity. An animal study that appeared in the International Journal of Molecular Sciences (2017), involving mice also found that the CB1 receptors are present in the pons area of the brainstem. The light/dark cycle modulates activation of CB1. This suggests that CB1 activation plays a prominent role in inducing sleep.

The fatty acid oleamide stops the gap junction-mediated cell-cell communication modulation that inhibits the GABA receptor. GABA is a neurotransmitter that has been found to enhance the production of melatonin, an important hormone that helps maintain circadian rhythms and induce sleep. Cannabis may further play a role in aiding sleep as the endocannabinoid system may induce GABA enhancing oleamide.

Overall, the research shows that cannabis holds great potential as a therapeutic tool. It could help to reduce some of the debilitating effects of cancer therapy.