The anti-inflammatory and anti-bacterial capabilities of cannabinoids make cannabis and teeth the perfect match for good dental health.

Forget the boogeyman, heights, or sharks — the real thing we’re all afraid of is the dentist. Around a third of us experience some kind of dental phobia that prevents or delays checkups. But what if there was something that could reduce the need for a dentist? Well, that’s where cannabis and teeth may be a perfect partnership.

Periodontitis, or gum disease, is one of the most common dental diseases. Periodontitis occurs thanks to the build up of dangerous bacteria, like those that cause plaque. This build up can lead to tartar or gum disease. It starts as gingivitis, which causes inflammation of the gums. It then moves to other structures, like the periodontal ligament and the alveolar bone. This typically shows up as red gums that bleed after brushing, and it can cause serious damage to your mouth.

If periodontitis spreads, it can destroy the periodontal bone and ligaments that support your teeth, ultimately leading to teeth loss. Serious cases can even result in bone damage, and become a risk factor for heart and lung disease. 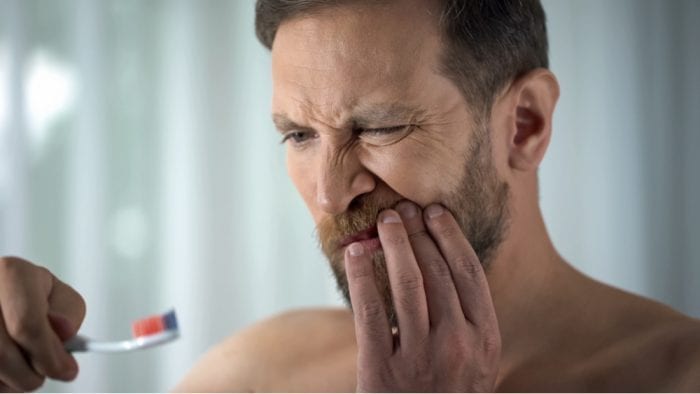 One unlikely ally in the fight against gum disease may be cannabis. Cannabis really is an unlikely ally because of several studies that highlight how it can contribute to gum disease. This review, for example, published in the Journal of Periodontal Research (2019), found that nineteen percent of the 13,000 research participants showed a connection between cannabis smoking and higher incidence of periodontitis.

However, when cannabis isn’t smoked, the plant can offer a lot more health benefits, especially for your teeth. With its rising popularity, more and more patients are taking cannabis products for a range of conditions. It seems that dental care may be the newest frontier. Cannabis-infused toothpaste and mouthwash are now available on the legal cannabis market. Most focus on CBD as the active ingredient.

Cannabis offers a lot of promise as a treatment for dental diseases such as periodontitis. In fact, there is currently a clinical trial underway looking at cannabis and teeth. Impression Healthcare is studying the possible therapeutic effects that CBD may have for fighting gum disease.

Research shows that cannabis offers potential as an anti-inflammatory agent. One animal study, published in the Journal of Experimental Medicine (2012), showed that CBD was able to significantly reduce chronic inflammation by enhancing the expression of GlyR. This is a receptor that mediates the glycinergic cannabinoid-induced suppression of inflammation and chronic pain. Researchers also showed that cannabinoids were able to stop inflammation without causing intoxicating effects or increased tolerance to pain killers.

Cannabis and Teeth for the Fight Against Periodontitis

Cannabis’ anti-inflammatory effect is showing its potential in fighting periodontitis, with studies showing the ability of cannabinoids to reduce inflammation in periodontitis patients. One Argentine study from the University of Buenos Aires (2012) showed that the endocannabinoid anandamide was able to “diminish the inflammatory response in periodontitis” in rats through the CB1 and CB2 receptors. Meanwhile, another study published in the Journal of Periodontology (2016), showed that the activation of the CB2 receptor through the HU-308 agonist resulted in “anti-inflammatory, osteoprotective, and pro-homeostatic effects” in the oral tissue of rats with periodontitis. 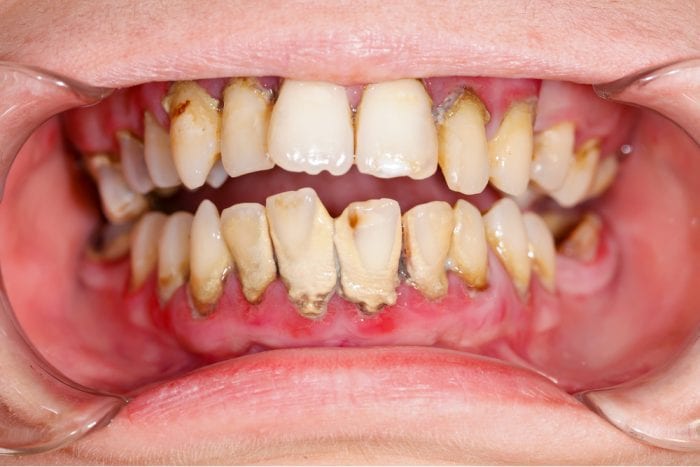 Inflammation of the gums occurs through the build up of bacteria. Any product with antibacterial properties could potentially slow or prevent periodontitis by killing the bacteria that causes it in the first place. An imbalance or build up of bacteria can also result in bad breath and cavities. So you should see an improvement in these symptoms with antibacterial products.

Cannabinoids have been shown to have antibacterial properties. One study — published in the Journal of Natural Products (2008) —found that both CBD and THC, as well as other minor cannabinoids, showed potent antibacterial activity against the bacterium methicillin-resistant Staphylococcus aureus (MRSA), a particularly tough staph strain that is resistant to some common antibiotics.

On a side note, an imbalance or build up of bacteria can also result in bad breath and cavities. So, you should see an improvement in these symptoms with antibacterial products, like cannabis.

Bone loss is another serious side effect from late-stage periodontitis that can significantly affect patients. Fortunately, cannabis also may provide an effective tool against alveolar bone loss in periodontitis patients.

One study, published in International Immunopharmacology (2009), found that rats with periodontal disease and treated with CBD showed less alveolar bone loss than the control group. CBD-treated rats also showed reduced neutrophil migration in gingival tissue. Neutrophils play an important role in sensing infection and causing an immune response that can lead to the damage seen in periodontitis. Overall, the animal study concluded that CBD, “may be useful to control bone resorption during the progression of experimental periodontitis”.

Cannabinoids offer a lot of promise in their ability to fight bacteria and inflammation that can lead to bad breath, cavities, or, more seriously, gum disease, tooth loss, and bone damage. While more research is needed to see exactly how cannabis and teeth relate, and the best consumption method, cannabinoids certainly offer great potential.