When the brain suffers a stroke or a traumatic injury, damage to the brain continues as the brain hemorrhage leads to a snowball effect of inflammation, oxidative stress, and excitotoxicity, or cell death by over-stimulation, usually by the neurotransmitter glutamate.

There aren’t many medications that can be given immediately following brain injury or hemorrhage to mitigate these effects, but because the endocannabinoid system (ECS) regulates all of these mechanisms, cannabinoids could be the perfect treatment.

The activity of the ECS has been studied extensively in animal models of stroke and traumatic brain injury (TBI). These studies have found that the expression of endocannabinoids and cannabinoid receptors in the brain is upregulated following stroke or TBI. For example, levels of the endocannabinoid 2-arachidonoylglycerol (2-AG) spiked following an injury and remained elevated for more than 24 hours. This indicates that the ECS could be working to protect the brain in response to injury. In fact, 2-AG acts as a vasorelaxer, so it improves blood flow in the brain after injury.

Many animal studies looked at the role of cannabinoid receptor CB2 in protecting the brain from damage following TBI or stroke. When cannabinoids that activate the CB2 receptor (also called receptor agonists) were administered prior to the simulation of a stroke, the infarct (or damaged and dead tissue) volume was much smaller than in animals that did not receive the treatment. Doctors found further confirmation of the role of CB2 after administering a cannabinoid that reduces or blocks the activity of the CB2 receptor. When they do so, the infarct size increases.

Activating the CB2 receptor seems to primarily work through the suppression of the inflammatory response. CB­2 receptor agonists reduce the ability of white blood cells to accumulate in the injury site. They do so by limiting their ability to stick to the injured tissue. The reduced expression of intracellular adhesion molecules (ICAM-1) at the injury site as a result of CB2 activation is likely the mechanism causing this. When scientists delete the CB­­2 gene in mice, then ICAM-1 expression increases. So too does pro-inflammatory cytokine tumor necrosis factor alpha (TNF-α). Inhibiting the release of cytokines like TNF-α is one of the known anti-inflammatory mechanisms of CB2 activation. Reducing white blood cell recruitment at the injury site also protects the blood-brain barrier. This shields the injury site from worsening inflammation.

The CB2 receptors also highly express on microglial cells. These are a kind of brain cell that actually relate to macrophages and migrats to the injury site. Microglia contribute to the inflammation response that can cause death of neurons in the area. However, activating the CB2 receptors seems to reduce the effect these cells have, preventing their release of toxic compounds and pro-inflammatory cytokines. 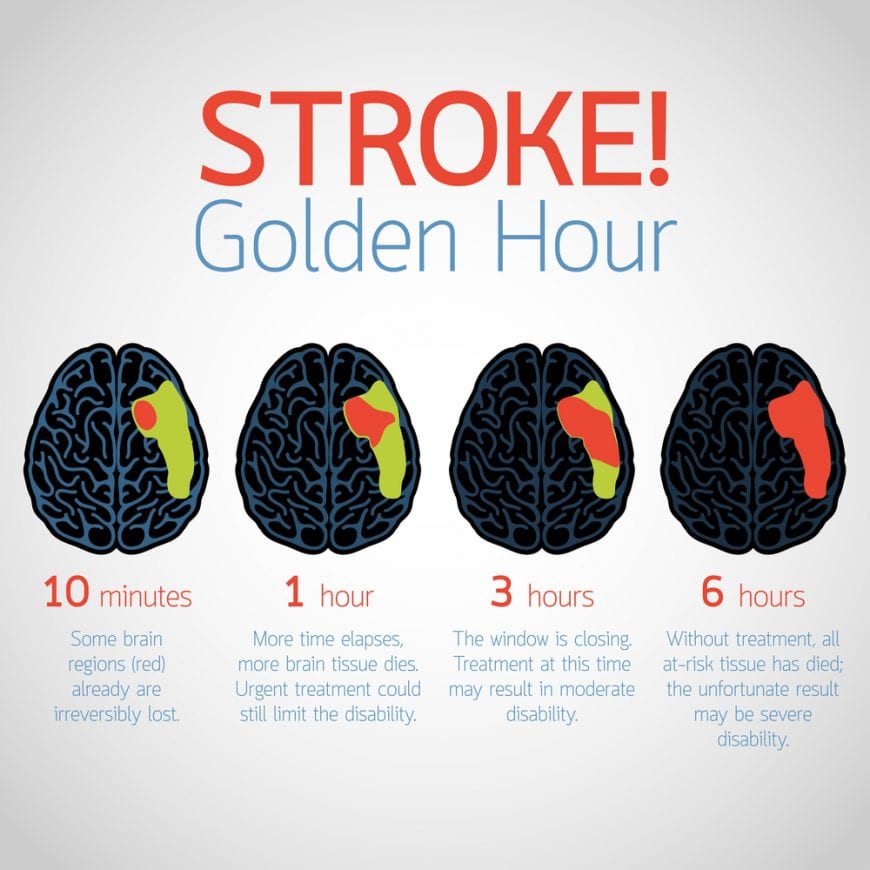 The CB1 receptor may also play an important role in protecting the brain from excitotoxicity. The neurotransmitter glutamate releases in large amounts following brain injury, causing cell death. However, CB1 activation inhibits various pathways involved in glutamate signaling, preventing glutamate release. The CB1 receptor may also regulate antioxidant pathways. This is because 2-AG reduces the release of reactive oxygen species (ROS) after injury. Cannabinoids themselves are effective antioxidants. This means they may work through other pathways to reduce the effect of ROS release at the injury site.

The large number of studies here are very encouraging. Especially those on the role of cannabinoids and the ECS in mitigating stroke or TBI effects. However, there are no human clinical trials yet. With luck we’ll soon see some demonstrating the efficacy of cannabinoids in reducing brain damage following TBI or stroke.

Finally: A Note on Those Suggesting Cannabis Causes Stroke

Continuing, Dr Komnenov summarizes how, “one study in rats concluded, the negative effects of cannabinoids occur at large doses of THC. However, the study did not address whether concomitant administration of CBD (as occurs in cannabis) counters this effect, as has been shown before. It also did not address that the average consumer would not be able to achieve these high levels of THC!” In other words, high levels of isolated, pure, THC, administered directly to mouse brains, did increase oxidative stress. Oxidative stress does associate with stroke.

However: the effects of isolated, pure THC in high concentrations do not translate to normal cannabis use. “This is because other phytocannabinoids and molecules such as terpenes. Many of them have anti-inflammatory and anti-oxidant properties. Thus they act in synergy protecting the brain against stroke.”

Arousal for Women May Be Enhanced by Cannabis