One of the most common cannabis grow problems are pests. Let’s talk about how to get rid of them. Now.

Sometimes, a seemingly harmless speck on a leaf can become a real issue that threatens the integrity of any grow operation. But, out of the 67,000 known crop pest species, it’s the same culprits who show up time and time again and cause common grow problems in cannabis plants.

Pests are real stressors on plants. A study published in Philosophical Transactions (2011),[1]Chandler D, Bailey AS, Tatchell GM, Davidson G, Greaves J, Grant WP. The development, regulation and use of biopesticides for integrated pest management. Philos Trans R Soc Lond B Biol Sci. … Continue reading analyzed the role pests play in final yields across all crops. The research attributed their presence to an incredible “forty percent reduction in the world’s crop yield.” While they have the potential to wipe out cannabis plants entirely, their presence at any level is often detrimental to final yield, and represents one of the main cannabis grow problems. For those who want to clean up their garden and give their yields a boost, here’s how to deal with the four main culprits found in cannabis gardens.

Spider mites reside on the underside of leaves. To the naked eye, they appear as tiny yellow dots. Once the mites proliferate, they begin killing the plant. They like it hot and dry, and thrive in an ideal environment of eighty-five to ninety degrees Fahrenheit with fifty percent humidity or lower.

Growers should inspect the leaves regularly for the telltale dots, and take action immediately once detected. The first course of action is environmental control and physical removal. If possible, raise the humidity to sixty percent and lower the temperature to eighty degrees Fahrenheit. Then wipe the underside of each leaf with a damp sponge. Physical removal also removes the eggs, and that’s something that a pesticide won’t do.

An alternate step is to introduce predator mites⁠ — those that feed on spider mites. Predator mites require a humid environment and a lower temperature. Maintain them both at sixty percent and eighty degrees Fahrenheit respectively. Predator mites can be purchased in different forms; some come with existing populations of spider mites to feed on, while others come alone on a leaf. The former means that growers introduce yet more spider mites to the plants, while the latter, which is more favorable, introduces several generations of predatory mites with eggs ready to hatch. 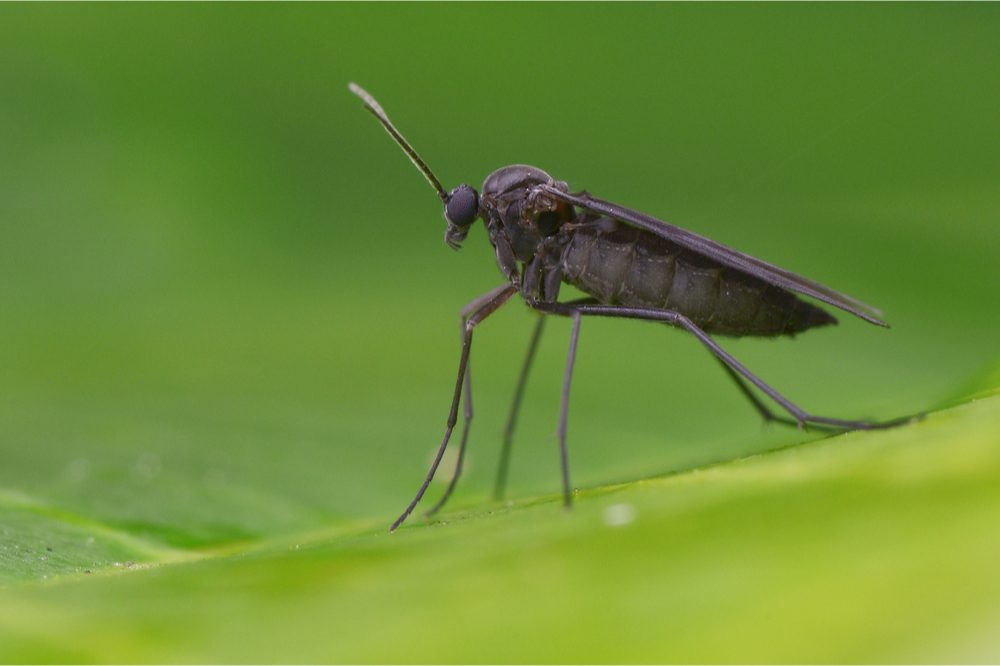 Commonly found in indoor gardens, fungus gnats are small black flies that lay their eggs in the root zone. These eggs later hatch into larvae, which in turn feed on the roots, leaving them vulnerable to root disease.

Novice growers commonly run into issues with fungus gnats through over-watering. However, infestations can occur across many mediums. One way to avoid fungus gnats, or even tackle them in the initial stages, is to let the top inch of the soil dry out before watering. Very often, fungus gnat issues will resolve themselves without the moisture that often serves as the catalyst for their proliferation. In more severe cases, it may take several weeks of religiously repeating this ritual before watering. When root disease becomes a real possibility, the last remaining course of action is to introduce a predatory species.

While mister kits and sticky strips can help kill the adults, to get to the heart of the issue, the introduction of the predatory nematode steinernema feltiae, which feeds on the larvae, is most effective. The bacteria Bacillus thuringiensis is also useful in combating fungus gnats. It produces a toxin that prevents the larvae from feeding and thus kills them off.

Thrips Strip a Cannabis Plant in No Time

Thrips remove the chlorophyll from leaves and leave a silver trail in their wake. With tolerance to insecticides, they are often hard to remove via chemical means, so biological intervention is often required to combat them.

A predatory wasp, called Orius, and the predatory mite, cucumeris, will feed on thrips. Both are more effective during the lights-on period. This means that predators are more useful during the vegetative growth phase, where many growers utilize the 18/6 protocol. Once the plants enter the flowering phase and the lights-on period is reduced to twelve hours, the presence of such predators is much less effective.

RELATED  How To Grow Hemp and Why It Isn't Easy

In addition to predators, the use of the natural pesticide pyrethrin and the bacteria Bacillus thuringiensis are effective. Both are toxic to thrips. Pyrethrin intoxicates the thrips by manipulating their nervous system, while Bacillus thuringiensis produces a protein that’s also toxic to thrips. While both are non-toxic to humans, it’s important to ensure that the product doesn’t contain additional harmful compounds. 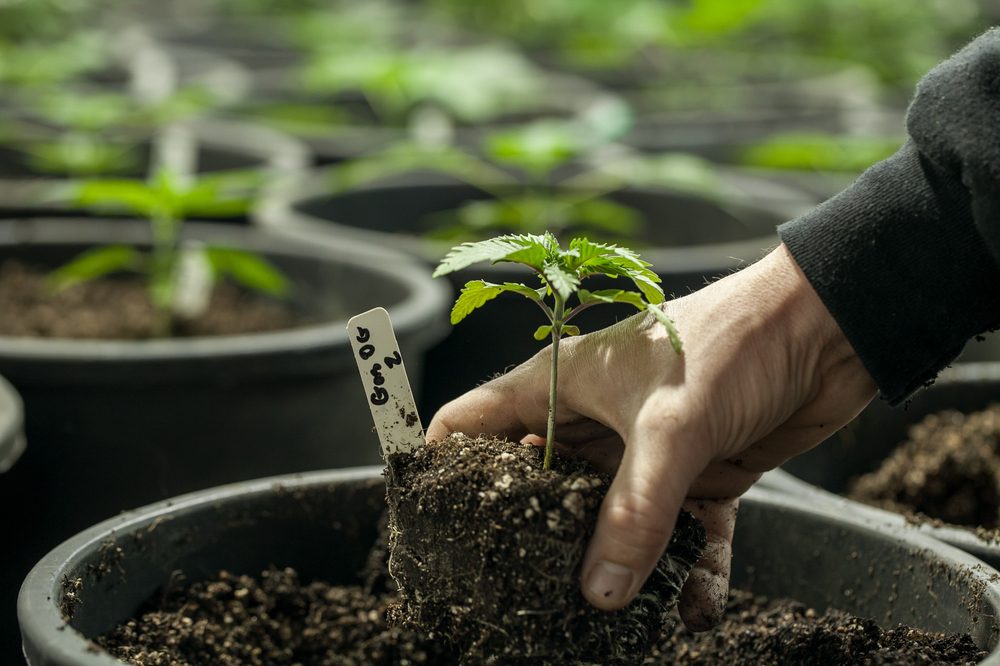 Aphids Multiply so Very Quickly in a Cannabis Grow

Aphids are difficult to eliminate but thankfully are rarely seen in indoor grows. Much more common in outdoor grows, they reside on the stems of cannabis plants or on the underside of leaves. They feed on the sap from cannabis plants and leave a sticky honeydew residue in their wake. Mold often results, as does the increased proliferation of ants. This actually protects aphids from predator species and thus compounds the issue.

While small numbers of aphids don’t present a major problem, populations can quickly multiply and stunt plant growth, spreading further disease. Ladybugs are an effective predator but are only effective in large quantities. It’s best to introduce the ladybugs across several applications. Keep them in the fridge until required. In addition to biological means, physical removal of aphids by wiping them off or blasting them with water may also be an effective elimination method.

Companion plants are a natural holistic method. They utilize the natural synergies built into Mother Nature. While the presence of certain plants close to cannabis may attract some of the common pests, sadly, the available science doesn’t suggest it can do much alone.

RELATED  How to Smoke Cannabis 101: From Technique to Etiquette

For the pests commonly associated with cannabis, several companion plants are effective. 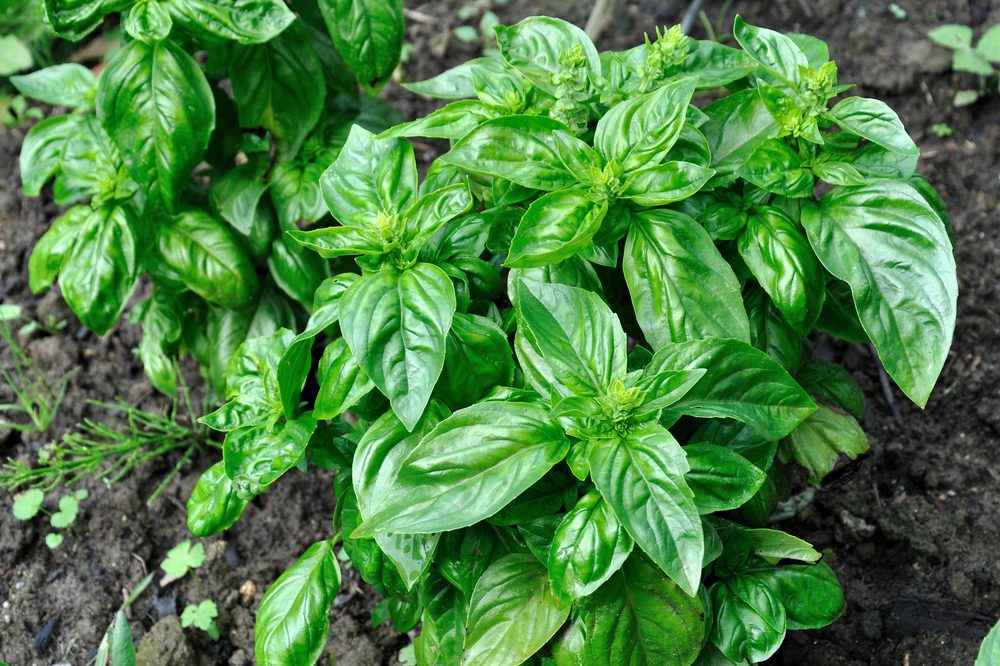 Cannabis Grow Problems: A Get Out of Jail Free Card

One strategy that can be effective for all pests is to raise the temperature of the garden to one-hundred and ten degrees Fahrenheit for forty-eight hours. This causes all eggs lying in wait to die of starvation and eliminates the upcoming generation. It’s not something that growers will want to rely on, but it may be what saves a crop from annihilation in extreme cases.

The Many Advantages of Growing Cannabis Outside