Cannabis May Have an Effect on Serotonin Release for Depression

The latest studies indicate that it may be serotonin action on endocannabinoids that relieve symptoms of depression.

Serotonin is the happiness chemical. Or at least that’s what its known for. As scientists learn more about the human endocannabinoid system, they’re learning more about serotonin, too. In doing so, they’re unlocking many secrets of cannabis and serotonin that may turn the medical world on its ear.

Serotonin and cannabis have a lot in common. They affect many of the same bodily processes and both interact with the endocannabinoid system through CB receptors. Both cannabis and serotonin improve mood and regulate anxiety. And now we know that they’re connected in our biochemistry, too.

Serotonin is classified as a monoamine neurotransmitter, which means that its job is to send information from one neuron (or nerve cell) to a target, usually another neuron, muscle cell, or gland cell. All monoamine neurotransmitters function via the body’s endocannabinoid system, which is also the special place where cannabis attaches to the body. 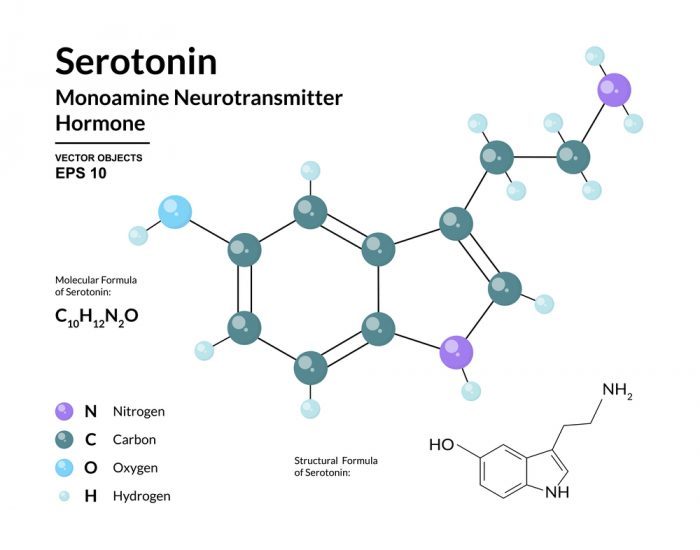 Serotonin is the common name for the chemical 5-hydroxytryptamine. It naturally occurs throughout the central nervous system (most notably in the brain, bowels, and blood platelets) and performs a variety of vital and nonessential functions in the body. Officially classified as a neurotransmitter thanks to its role in passing along information between nerve cells, it has a hand in determining your bone density, sexual functionality, mood, blood clotting, and digestion, among other things.

If you’ve heard of serotonin before, it’s probably in relation to depression. Whole classes of drugs called selective serotonin reuptake inhibitors (SSRIs), such as Prozac and Zoloft, are marketed to treat major depression and anxiety. Basically, SSRIs ensure that more serotonin sticks around in the brain. To be clear: scientists don’t entirely know why this works.

Depression is a hazy, nebulous disease. It’s thought to be caused by a lack of serotonin in the brain, but actually, this theory isn’t scientifically proven. Regardless, the treatment works for some people even if we’re not correct on ‘the why’ it works.

There’s a lot of talk going around about the relationship between depression and cannabis. However, as this study from the journal Addiction Biology points out, most of the “evidence” cited for that link is inconsistent and weak. Genetics predict depression better than any history of cannabis use.

In reality, cannabinoid receptors play a role in regulating serotonin activity within the body. And studies have even shown that using cannabis acts as a natural selective serotonin reuptake inhibitor. So, people with depression may be consuming cannabis to self-medicate using the same mechanisms that lab-created pharmaceuticals are trying to copy. If anything, that may be the only link between depression and cannabis.

How Cannabis Reacts with Serotonin Receptors

Researchers only partially understand the relationship between cannabis and serotonin. A 2019 study in the journal Ovid found that CBD alleviates neuropathic pain in mice by re-igniting serotonergic firing in the spinal columns. Put in a simpler way: cannabis caused the body to flush its pain centers with serotonin to decrease pain.

RELATED  Does Cannabis Kill Brain Cells? The Study That Started the Propaganda 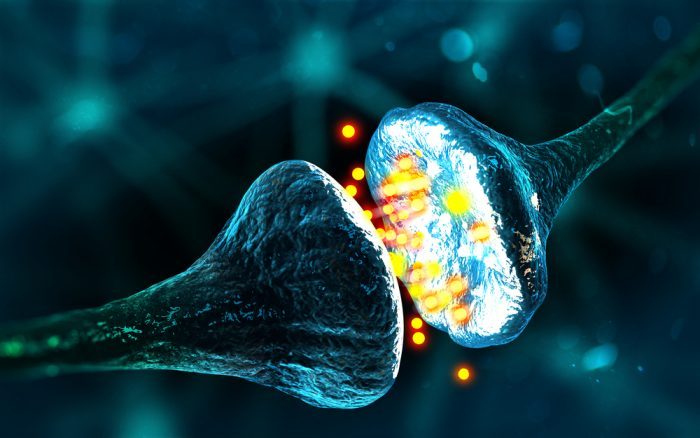 For example, when a CB1 receptor meets a 5-HT2A receptor, they bond and become one. When this happens, the endocannabinoid system’s agents, like THC and CBD, can affect areas like the hippocampus, dorsal striatum, and cortex. In essence, the body’s serotonin receptors mediate cannabinoids.

The ability of cannabinoids, like THC and CBD, to swim in serotonin’s waters could be why they’re so good at alleviating depression and anxiety — things that serotonin is naturally designed to do. It’s almost like they’re the medicine going down with the juice.

This is a complex topic, and still not completely fleshed out. But there’s no doubt that the brain’s happiness chemical and good ol’ cannabis have a lot in common. And they’ll potentially teach us much more about each other as the drumbeat of science marches on.