Study finds that cannabinoids can fight dental problems like plaque, but what about rotten teeth?

Organic shoppers rejoice, there might be a future for an effective all-natural cannabis toothpaste. The first of its kind, a recent study published in Cereus (2020), posed the question of whether or not cannabinoids could reduce the bacterial content of dental plaques. And the results? In a study on those whose dental health ranged from pearly whites to rotten teeth, cannabinoids actually outperformed well-known synthetic toothpastes like Oral B and Colgate.

How is this possible? First, some details on the study. Researchers scrutinized the bacterial colony count of dental samples from sixty human candidates. None of the candidates had a history of antimicrobial therapy or immunosuppressives, and their periodontal screenings varied from perfect gums with no bleeding to severe bone resorption and high tooth mobility.

Researchers took plaque samples from the subjects and spread them onto two Petri dishes, where they were then treated with cannabinoids and synthetic toothpaste. On one Petri dish, scientists tested cannabinoids CBD, CBC, CBN and CBG. On the other, cannabigerolic acid (CBGA), Oral B, Colgate, and Cannabite F (a toothpaste made from pomegranate and algae).

What scientists found was colony counts were significantly lower when treated with cannabinoids in comparison to synthetic products. They also discovered that CBN and CBC were the most effective in reducing bacteria.

Now, one drawback from this study is its lack of statistical analysis. This was due to the difference of microflora from each individual. As humans, each of our mouths contain their own unique biome, making statistical analysis very difficult. There are no replicates. That said, this study paves the way for possible innovations in dental hygiene. 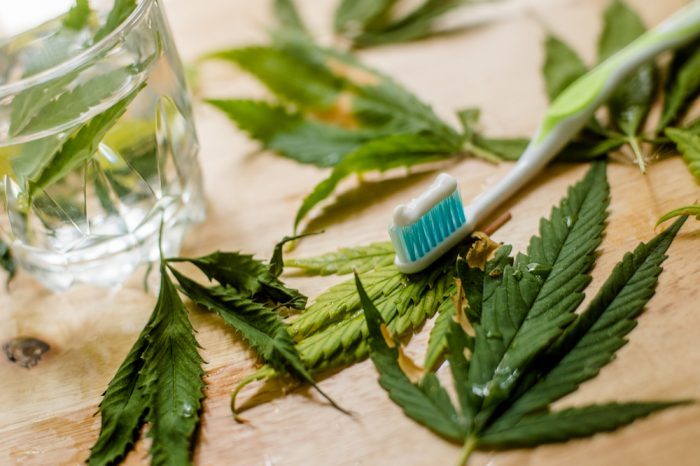 Cannabinoids as an Antibacterial

Thanks to the growing amount of research on cannabis, we now know that it contains multiple antibacterial qualities. THC, CBD, CBC and CBG have all exhibited an ability to fight various infections. In fact, a study published in the Journal of Natural Products (2008), found that cannabinoids from the cannabis plant showed activity against drug-resistant strains of Staphylococcus aureus, known as MRSA.

While THC and CBD are becoming very well-known for their antibacterial qualities — specifically through interactions with CB1 receptors — it is still largely unknown how these cannabinoids actually work against infection.

However, in another study in Scientific Reports (2018), researchers discovered that endocannabinoid anandamide (AEA), and the endocannabinoid-like arachidonoyl serine (AraS), also had the ability to fight against drug-resistant MRSA.

RELATED  There is Nothing the Same About Catnip and Cannabis

Furthermore, these endocannabinoids were effective in fighting MRSA through inhibiting biofilm formation. And here is where the possible connection lies — dental plaque is a biofilm of gram-positive bacteria like Streptococcus mutans. This bacteria is one of the microorganisms that causes rotten teeth. Could cannabinoids from the cannabis plant also inhibit biofilm formation?

What we Know so far About Cannabis and Teeth

The 2020 Cereus study on cannabis and dental plaque is only preliminary. Larger, long-term studies must occur to deduce the efficacy of cannabinoids on a wider variety of individuals. And as science begins to understand more about the endocannabinoid system, we’re learning more about how our individual bodies respond to cannabinoids, in both good and bad ways.

Right now, most of what we do know regarding cannabis and dental health isn’t altogether positive. Smoking cannabis has links to gum disease and declining periodontal health. Long-term cannabis smokers statistically show damage to connective tissue and tooth loss, similar, but not likely as bad, as the rotten looking teeth of chronic tobacco smokers.

A study published in Neuroimmunomodulation (2012), showed that endocannabinoid AEA, could reduce periodontitis inflammation in rats via CB1 and CB2 receptors. And we know that cannabis also exhibits anti-inflammatory properties. However, even though cannabis could potentially prevent bacterial infection and inflammation, smoking it can actually cause periodontitis. 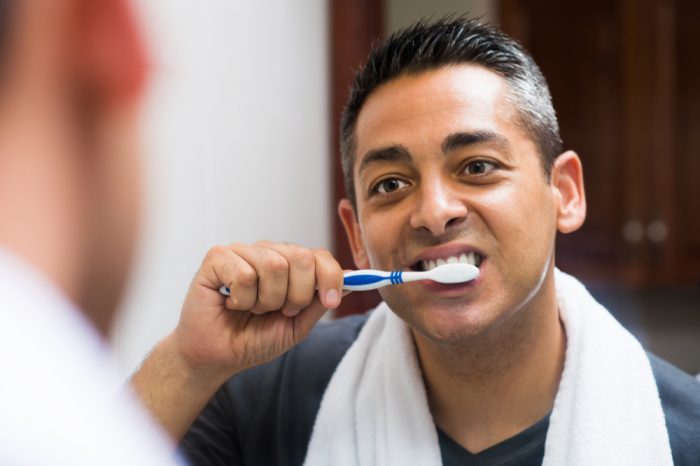 The Future for Cannabinoids and Dental Health

As we can see here, even though cannabis could provide bacteria fighting treatment, smoking it will not protect your teeth against decay. The way in which those cannabinoids are delivered to your mouth makes a difference.

In order to effectively prevent the buildup of dental plaque, cannabinoids like CBD, CBC, CBN and CBG need to be further analyzed so they can be effectively used and targeted. More studies will shed more light on how these cannabinoids affect dental plaque on an individualized basis. Further, these will also answer whether or not a one-size-fits-all toothpaste can be useful. With those specifics in mind, could a cannabis toothpaste be just around the corner?

Well, you can already buy cannabis-infused CBD toothpaste and mouthwash legally in the United States. And though CBD wasn’t found to be quite as effective as CBC and CBN in the Cereus study, all three of these cannabinoids can be found in the now-legal Cannabis sativa hemp plant.

What all this means is that toothpaste made with hemp might not cure teeth that are already rotten. However, it could someday provide an all-natural, vegan, toothpaste alternative, that is actually more effective than popular synthetic products.

HPV Study On The Anti-Tumoral Potential of THC