Cannagar – When You Have Some Big Dollars To Spend on Cannabis

The cannagar is an homage to the Thai Stick of 70s and 80s: beautifully crafted, potent painkilling, and more than a little pricey.

Did you remember a time in your life when the only cannabis you could get your hands on was no better than smoking liverwort?  Perhaps you mockingly referred to it as schwag, dirt weed, or just a bag of stems and seeds. As legalization sweeps across America, long gone are these regrettable sacks filled with light brown, seeds-and-stems bud. Welcome to the other end of the spectrum, the ultimate visual and aromatic cannabis experience,  the cannagar!

The industry has grown so civilized that it’s actually pretty difficult to find such low-quality cannabis, even if you are feeling nostalgic. People are much more inclined toward their dab rigs and torching high potency waxes and shatter. On the other side of all this dank, though, is the top-shelf cannabis products that are virtually untouchable for the common folk. This shows the maturation of the cannabis industry.

For high-rollers, however, these very top-shelf products mean adventures in exclusive, and sometimes ridiculous, ways to get your medicine.

Seattle’s most celebrated dispensary, Diego Pellicer, sold a $3,600 cannagar shortly after its opening bell.  With twenty eight grams of flower rolled into leaves that were dipped in seven grams of oil, the purchaser of this behemoth claimed that it was smoking for nearly seventeen hours! That’s a lengthy smoking experience. 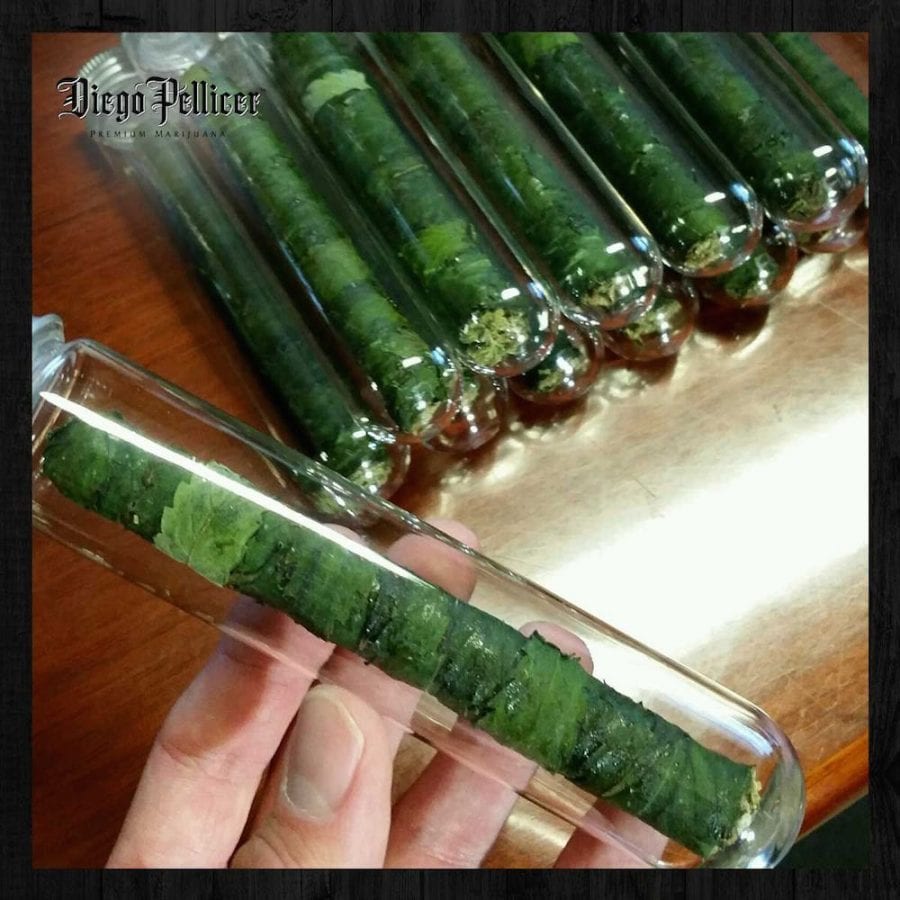 That leaves me pondering on two things. One: has wealth inequality gotten so bad that people can now spend over $3,000 on a cigar full of cannabis? And, two: how did the owner manage to stay awake after the first sixteen hours?

I joke, but I shouldn’t, because that’s not even the most impressive cannagar ever sold by Diego Pellicer. What is, by many standards, little more than an outrageously expensive blunt, recently sold for $10,000. Was it worth it?

The Richest Cannagar of Them All

Encased in a custom-made humidor, the cannagar in question –named El Dorado–shines enticingly in its 24-karat gold leaf wrap, and comes with a personalized cigar cutter and matching lighter. You might ask what kind of person would buy such an extravagance? A celebrity? A rich business person on a whim? Someone in a mid-life crisis?

RELATED  How To Roll a Cannabis Cigar (Thai Stick)

In the end, the golden cannagar went to hedge fund manager, Justin Costello, a friend to Diego Pellicer’s owner, Alejandro Canto. Costello says he wanted to help his friend out. He bought the golden monster on June 18 of this year and probably hasn’t stopped smoking it since then. If the $3,600 cannagar lasted seventeen hours, I imagine the one valued at $10,000 should burn well into 2019.

So, What is a Cannagar?

The cannagar is the same concept as a Thai stick, that rose into folklore in the 70s (originally from Thailand, obviously). To make these medicinal wonders, cannabis buds are bound to bamboo skewers. Then dipped in opium, and wrapped in cannabis fan leaves. It’s the headiest cigar you’re ever going to ‘smoke.’

Thai sticks of today, along with cannagars, undergo dipping into concentrates or cannabis oil rather than opium. Each is hand rolled, usually in cannabis leaf.  So, for people who love connecting with their cannabis, the thought and care that goes into a hand rolled product is a satisfying experience. However, at the same time this is clearly not the healthiest way to consume cannabis but rather just a fun novelty. Vaping, eating, and taking cannabis oil are just three of several ways patients can medicate.

The look and feel of smoking a cigar adds to this connection, along with lending you an air of sophistication. Lighting cannagars happens in exactly the same way as a cigar. By cutting off the tip of the foot, tilting the cannagar at 45-degrees, and then gently toasting it until the entire end is glowing orange.

Traditionally, a person does not inhale a cigar; it’s an experience of the mouth. With the cannagar, on the other hand, a person can inhale. Cannagars allow a full toke, which delivers a combination of premium flower, high-grade leaves, and potent rosin, all in one hit.

Would you try it?