There is Nothing the Same About Catnip and Cannabis

Your cat might enjoy getting high on catnip, but cannabis is dangerous for kitties.

Catnip is everywhere, from toys to catnip bubbles, so the question isn’t a new one: Why do cats get high on catnip? The answer is interesting, since it so closely mirrors the effects of cannabis.

First, let’s talk about nepetalactone. It comes from the plant Nepeta cataria, otherwise known as catnip. The plant is a perennial that’s easy to grow, and in some cases, is considered a weed. Catnip produces an oil called nepetalactone. When a cat inhales this chemical, it binds with receptors in the cat’s nose.

The binding stimulates sensory neurons. Furthermore, it leads to altered activity in the amygdala, hypothalamus and olfactory bulb. That’s when the cat will start having a physical response. They’ll experience a type of euphoria, much like they’re reacting to a pheromone.

Is Catnip Similar to Cannabis?

Once this intense wave of intoxication is over, the cat is calm, docile and zoned out. All in all, it lasts about thirty minutes. Not every cat responds to catnip, but roughly seventy to eighty percent do. The reaction is basically the same every time. Catnip is also safe for cats, which is why it’s marketed to pet owners in a variety of different forms. From live plants and oils, to catnip bubbles, it’s like the legal version of cannabis for cats.

Can Humans get High on Catnip Bubbles?

If catnip binds to receptors in a cat’s nose, does that mean it does the same thing for humans? It turns out it doesn’t. Humans cannot get high on catnip. Some cultures, however, have used catnip as an herbal medicine. Pet owners can also use catnip for dogs. However it doesn’t have the same effect on dogs as it does on cats. What catnip for dogs may help with is relaxing a nervous pup or relieving motion sickness.

And Can Cats get High on Cannabis?

Unlike our human inability to get high on catnip, cats can get seriously intoxicated from inhaling or eating cannabis. The same goes for dogs. They have cannabinoid receptors just like humans do. And cats also have CB1 receptors, located in the ovary and oviduct. But, as documented by the recent sharp rise in emergency animal veterinarian visits, THC is not safe for cats (or dogs). 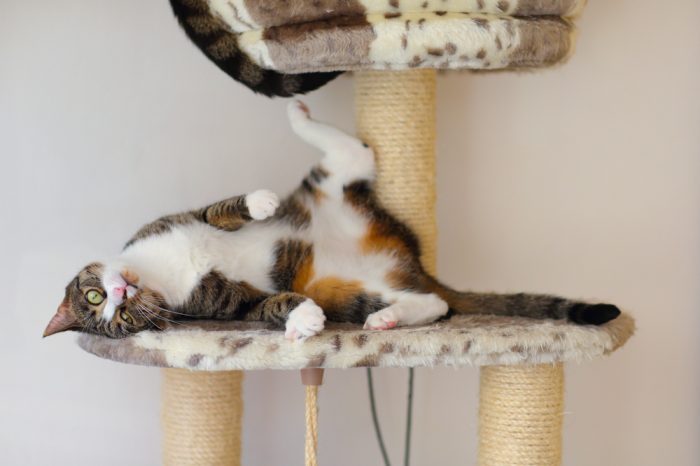 Not only is the experience of being high on THC not fun for cats and dogs, it can be threatening to their health. However, there have been far more cases of cannabis intoxication in dogs than cats. This happens mostly because dogs are more gluttonous than cats, and more likely to sneak a few edibles off the coffee table. Cats are not well-known for having a sweet-tooth.

What do Cats Experience When Consuming THC?

A study published in Acta Veterinaria Scandinavica (2019), described what happens when a cat becomes intoxicated from THC. “The owner described the animal as ‘absent-minded,’ disoriented, not reacting when called and behaving ‘strangely.’ The cat walked around aimlessly, tried jumping into inaccessible areas, ran around the room, then hid and attacked people. This behavior was accompanied by loud meowing and hissing.”

The researchers added: “The owner observed that prior to the aggression episodes, the cat had mydriatic pupils, which she believed showed ‘strong fear.’ The cat demonstrated increased thirst, polyuria, attacks of gluttony mixed with periods of inappetence. During the attacks, the animal was not able to eat or drink by itself.”

In the case of this particular cat, someone had blown smoke in the cat’s face. Veterinarians strongly discourage people from doing this to cats or dogs. The experience of cannabis intoxication is confusing and intense for animals, not to mention very unhealthy.

Signs of feline intoxication from cannabis include: anxiety, unusual behavior, convulsions, vocalization, agitation, vomiting and trouble eating. They might appear fearful and disoriented. What’s worse, cannabis in cats doesn’t just wear off in thirty minutes like catnip. Cannabis intoxication in dogs and cats can last anywhere from several hours to several days. According to the above study, it’s unknown how quickly cats metabolize cannabis.

RELATED  Is Cannabis the Answer for Chronic Pain? 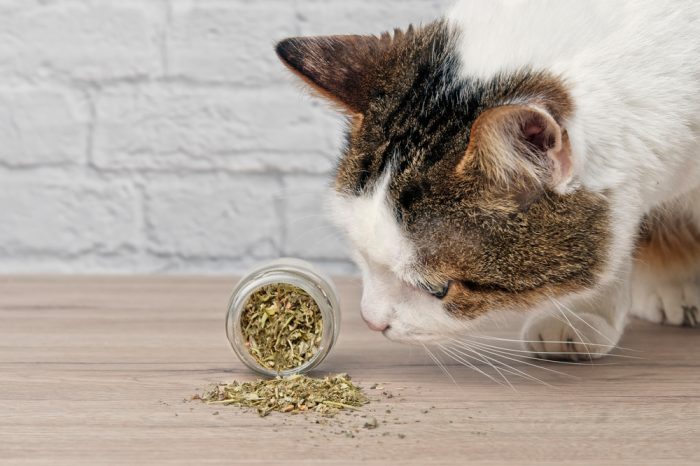 There are now countless CBD products marketed for pets, including cats. But unfortunately, there haven’t been many studies on how CBD affects pets. And of what little research exists, there are no direct studies on how CBD affects cats specifically. However, it has been more or less deemed safe and potentially beneficial for dogs. Reports of reduced anxiety, reduced aggression, and a reduced inflammation from pet owners has bolstered the CBD pet treat market.

CBD could potentially be safe and beneficial for cats, but it’s important to speak with a veterinarian first. It’s also good to be aware how cats can become intoxicated from cannabis. Cats can get uncomfortably high from inhaling THC, eating it, and potentially from licking toxins or carcinogens while cleaning their fur.

In cases of cannabis intoxication, be sure to contact a veterinarian right away. If there isn’t an emergency vet service nearby, contact the ASPCA Animal Poison Control Center by calling 888-426-4435.

Hemp Treats For Dogs and Other Pets: Are They Healthy?

How to Dispense CBD to Pets That Are Not Into it