Preclinical research actually suggests a treatment effect between CBD and prostate cancer. Where are the human trials?

Researchers have demonstrated that, in animal trials, large concentrations of CBD may effectively prevent metastasis, decrease cancer cell viability, and induce apoptosis. However, medically-prescribed prostate cancer treatment does not involve CBD, and won’t before there are substantial human trials to prove its effectiveness. What’s the hold-up? There is a definitive lack of randomized controlled human trials investigating the treatment effect between CBD and prostate cancer.

If there’s a cancer to push treatment on, this would be a great option. Despite treatment improvements and declining death rates, prostate cancer remains the second leading cause of cancer death in men in the United States. Prostate cancer will kill approximately 33,000 American men in the coming year. The majority of these deaths will occur in men whose prostate cancer spreads to other parts of the body. Therefore, early treatment and metastasis prevention are key. Preclinical evidence from laboratory settings and in animals suggests that cannabidiol (CBD) should be looked into as a treatment option for those with aggressive prostate cancer.

This finding provided a rationale for treating prostate cancer with a cannabinoid receptor agonist. CBD is a cannabinoid receptor agonist. To test this, the researchers administered a different agonist. This lets them theoretically mimic the indirect action of CBD. In doing so they found that the treatment resulted in a significant dose-and time-dependent decrease in cell viability. Amazingly, it also increased cell apoptosis (programmed cell death). Furthermore, there was no significant impact on healthy prostate cells. 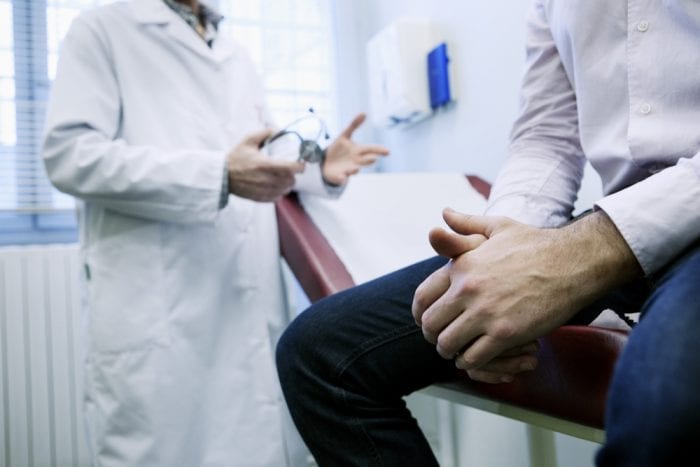 There are multiple physiological mechanisms at work in the growth and spread of prostate cancer. In particular, metastasis is the spreading of tumors throughout the body. Metastasis is facilitated through a process called angiogenesis. Angiogenesis is the process in which new blood vessels form, allowing the transfer of oxygen to the body’s tissues. Vascular endothelial growth factor (VEGF) is an angiogenic protein that regulates angiogenesis by inducing migration of endothelial cells. Interestingly, it appears to be under CBD’s control.

In a study published in Pharmacology and Pharmacy (2014), the researchers assessed the anti-inflammatory and anti-tumor effects of CBD across multiple prostate cancer cell lines. They found CBD to be a potent inhibitor of cancer cell growth. They also found that CBD does not negatively affect healthy prostate cells. Further, CBD downregulated CB1 and CB2, as well as VEGF. Like any tissue, tumors need a healthy supply of oxygen to grow and spread. By downregulating VEGF, it appears that CBD may prevent prostate cancer metastasis.[2]Sharma, M., Hudson, J. B., Adomat, H., Guns, E., & Cox, M. E. (2014). In vitro anticancer activity of plant-derived cannabidiol on prostate cancer cell lines. Pharmacology & Pharmacy, 5(08), … Continue reading

Experts have been citing the very attractive safety profile of CBD for years. Unlike THC, CBD is non-psychoactive and will not surprise an individual with an unsolicited ‘high’. Furthermore, research demonstrates that CBD does not cause changes in food intake, induce catalepsy (trance-like or seizure state), negatively affect physiological parameters, or alter psychomotor or psychological functions. Amazingly, chronic dosages of up to 1,500 milligrams per day have been well-tolerated in humans.

RELATED  Cannabis Could be a Big Player in Aging Gracefully

A more recent review published in Cannabis and Cannabinoid Research (2017) extended on previous research outlining that the most commonly reported CBD side effects are tiredness, diarrhea, and weight changes.[4]Iffland, K., & Grotenhermen, F. (2017). An update on safety and side effects of cannabidiol: a review of clinical data and relevant animal studies. Cannabis and Cannabinoid Research, 2(1), … Continue reading The authors conclude that when compared to other drugs targeting the same conditions, CBD had a better side effect profile. Based on the preclinical effectiveness of CBD on treating prostate cancer and the known safety of CBD treatment, why haven’t there been any human trials?

Where are the CBD and Prostate Cancer Human Trials?

There are several possible reasons for the lack of CBD and prostate cancer human trials. First, medical cannabis remains to be illegal in many countries throughout the world. When a drug is illegal, it is difficult to obtain it and conduct research. This could soon be changing as more countries legalize medical cannabis. For example, the 2018 Farm Bill which removed hemp as a Schedule 1 drug was a step in the right direction.

Second, CBD is a non-proprietary product. Large drug companies do not have the financial incentive to conduct large scale randomized controlled trials on CBD because they currently cannot patent the product.

Finally, ethical protocols make it difficult to study the effect of CBD on prostate cancer independent of other proven therapies. The first human trials will need to explore CBD as a complementary therapy, as it is not ethical to give patients an unproven therapy instead of a treatment considered best-practice. Nonetheless, the future is bright for CBD as a treatment for prostate cancer. Certainly, human trials are coming.