The Pharmaceuticals Were Not Working for my Tics

Cannabis is helping control my tics and get me off Zoloft.

My name is Chad and cannabis has helped me with Tourette’s Tics, anxiety, OCD, and getting off Zoloft.

At around 10 years old I began doing weird movements with my eyes, head, and neck. Back then Tourette’s wasn’t as well known as it is today. My family used to lovingly tell me to “stop doing that thing with your eyes.”

These tics continued off and on, and in my late teens/early twenties these were accompanied by bad anxiety. It was a very dark time in my life. In 2002 (at the age of 22) I was officially diagnosed with Tourette’s, Generalized Anxiety Disorder, and OCD.

They wanted me to try an antipsychotic, but I was not comfortable with that. The next step was to try antidepressants, which can help anxiety, depression, and calm tics. I went on Wellbutrin. After three weeks I became very depressed and suicidal. I went off it immediately and stayed off pharmaceuticals for a couple of years before gathering the courage to try Zoloft for tics. The first few weeks were rough, but it eventually brought me relief.

After five years, it was taking a toll on my body and I wanted to come off. This is when the drug revealed its ugly side… I was very unstable, extremely irritable, angry, sad, and had the dreaded “brain zaps.” I was so uncomfortable, I gave up trying to reduce the dose. Unfortunately, my body was under the control of this drug.

Discovering RSO Instead of Zoloft for Tics

Fast forward to December 2016. My wife has some thyroid issues, headaches, and trouble sleeping. My brother told me about Rick Simpson oil. With the rapid expansion of social media, I began seeing the testimonies of folks who had been treating a substantial amount of ailments using concentrated cannabis oil (or Rick Simpson oil). After researching and learning about the oil, I chatted with my wife about possibly having her try it.

RELATED  Aging And Cannabis: Is CBD Really The Fountain Of Youth? 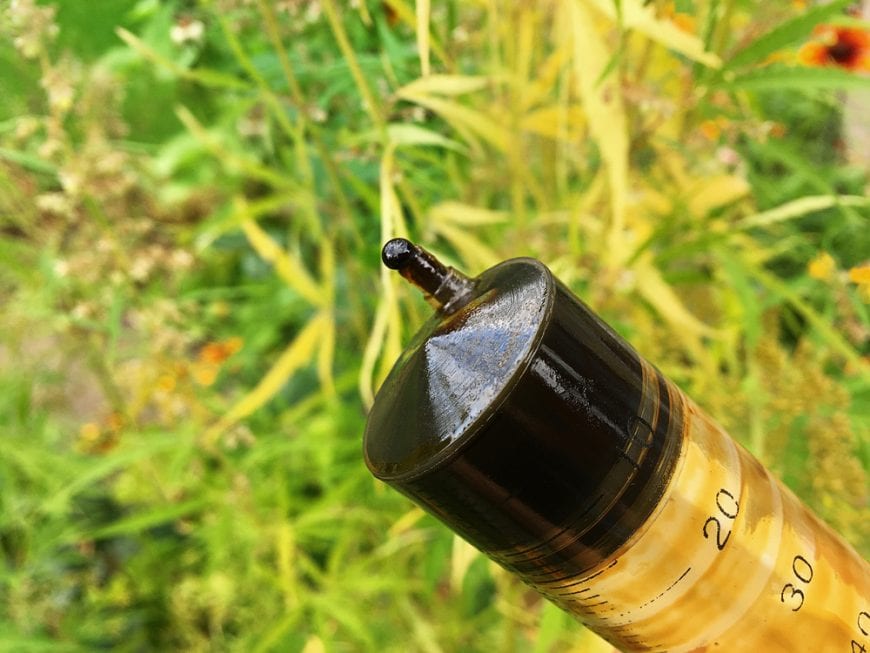 Being that I used to be a wake-n-bake, all day smoker in my late teens and my wife never really smoked cannabis, I volunteered to do a test run of this oil to gauge its effects. After ingesting the oil a few times I noticed that my tics were substantially reduced and my anxiety was very, very much calmed down.

She tried it as well, but it didn’t do much for her thyroid. It’s also challenging to dose and she doesn’t like the psychoactive effects. She has since began taking CBD oil, and this is where the story really shifts toward what cannabis has done for my condition.

I continued taking the oil and taking notes along the way. My brother had a vape cartridge with a hybrid strain oil in it. When I asked to try it, it was like a miracle. The immediate relief was almost unbelievable. 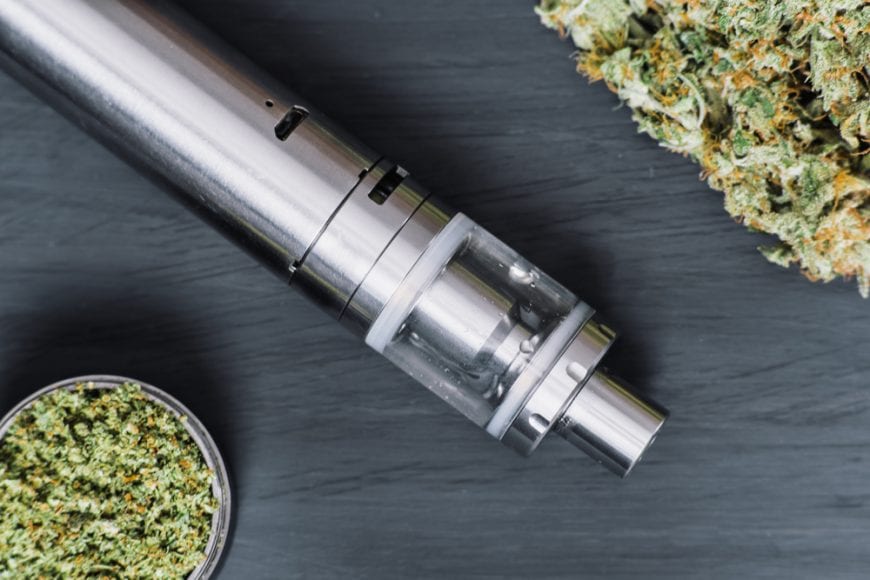 My tics settled and my anxiety was substantially reduced. This is important to me because anxiety causes tics, and tics cause anxiety. It’s a very unpleasant circular situation for me. But vaping that oil was just amazing. Unlike waiting hours for the concentrated cannabis oil to kick in (whose bioavailability depends on what you’ve eaten as well as your metabolism), the vape was almost instant relief. Needless to say, I switched over to vaping.

I’ve been vaping prefilled cannabis oil cartridges for about eight months. I’m down to 50mg per day of my Zoloft and I feel great! My goal is to wean off the Zoloft completely. Cannabis not only provides immediate relief from my tics and anxiety, it’s helping me wean off the Zoloft, it takes away my carpal tunnel pain/inflammation, gives me an amazing night of sleep, and does far more for my health than SSRI medication.

The best part of all is that this is a natural, God-given plant with an exhaustive list of medical benefits, as opposed to a man made pharmaceutical that has controlled my mental health for over a decade with ravenous side effects.

I’ve found that Sativa-dominant hybrid strains work best for me. Blue Dream is the one I’ve narrowed it down to thus far, although I do mix it up for tolerance reasons.

Treat Anxiety, Depression, and Other Issues to Soothe the Tics

As Chad’s journey unfolded, he used several different prescriptions, like Zoloft, for tics. His doctors were undoubtedly trying to treat the many associated mental health issues, to soothe the severity of his Tourette’s Syndrome. 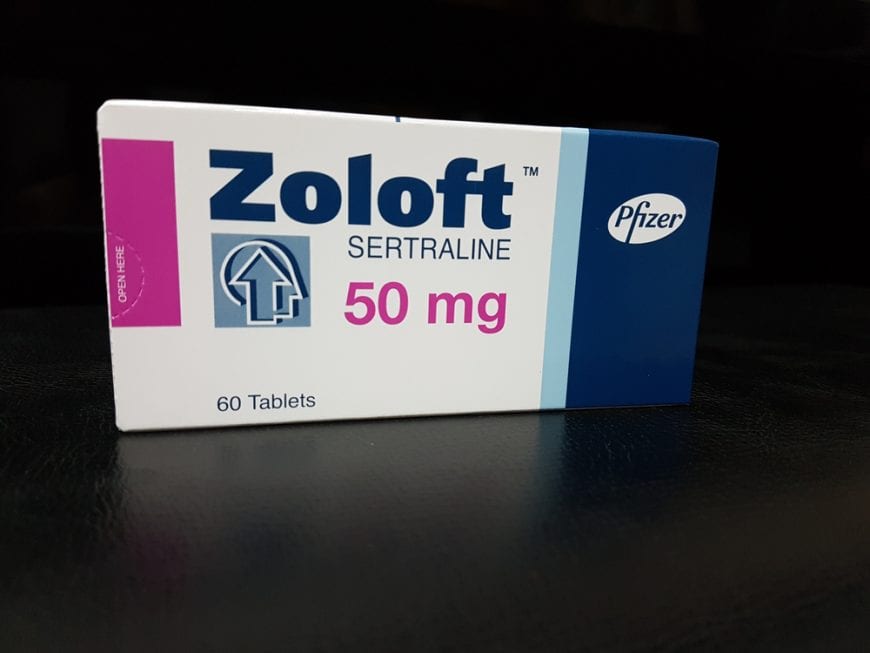 According to the National Center for Neurological Disorders and Stroke, “Tics are often worse with excitement or anxiety and better during calm, focused activities.” His doctors were not wrong to try treating the other mental health issues, but at least in Chad’s experience, Zoloft for tics didn’t work.

Thankfully, Chad discovered a solution that did treat the symptoms of his Tourette’s Syndrome – cannabis. In his experience, Zoloft for tics came with many disagreeable side effects. Cannabis, on the other hand, was a much better option. Among support groups and online forums, there are many reports of people taking cannabis for the treatment of Tourette’s. It may be because the plant helps soothe depression and calm anxiety.

On top of treating the many associated mental health issues to Tourette’s Syndrome, cannabis seems to work within the specific areas of the brain affected by the disease. By targeting the endocannabinoid receptors within the basal ganglia and hippocampus regions of the brain, cannabis may manage the severity and frequency of tics.

The Need for More Research

At the time of writing, the support for cannabis and Tourette’s Syndrome was largely anecdotal, with a scattering of preclinical studies. For example, a small German report showed cannabis successfully reduced motor tics in a majority of participants. The results were exciting, but the scope of the study was too small to draw serious conclusions.

Over the coming years, thanks to the growing support for cannabis as a safe treatment for mental health issues, we should get a better understanding of cannabis for Tourettes. While some people may support Zoloft for tics, not everyone agrees. With more research, cannabis may prove to be an effective natural alternative.

My Anxiety Was So Severe, Dying Seemed Like a Good Option