Lyme disease from the deer tick has become a significant global health issue.

Lyme disease originates in rodents, where deer ticks pick it up. The ticks reside on the white-tailed deer, hence the name. They then lay eggs, and it’s this which leads to further propagation of the disease. For patients afflicted, it’s critical they receive antibiotic treatment in the early stages, ideally within the first few days of exposure. Treatment doesn’t always work in the later stages, and can often lead to long-term and debilitating consequences.

When traditional antibiotic treatments fail to eliminate the underlying infection, there is a chance cannabis can help.

What Are the symptoms of Deer Tick Borne Lyme disease?

According to the Centers for Disease Prevention and Control (CDC), the symptoms of Lyme disease come in waves, and symptoms vary significantly depending on the stage of the infection.

Months after infection, symptoms can become more severe. Facial palsy, arthritis, pain in tendons, inflammation of the brain and spinal cord, and nerve pain are all common.

In its most extreme cases, Lyme disease can affect the mental health of the individual and even develop into encephalitis. Perhaps worst, Lyme disease can cause such severe depression that it puts people at risk of suicide. 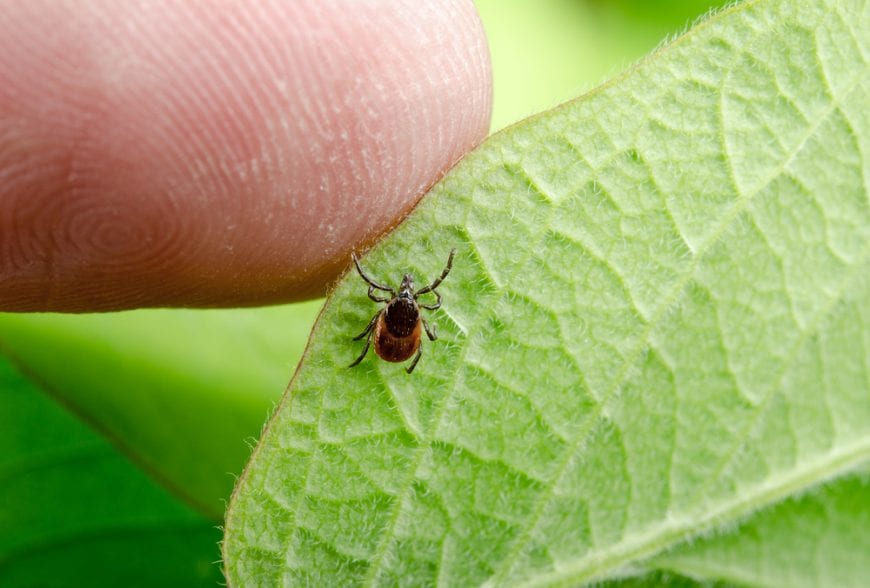 The Science on Cannabis and Lyme Disease

There’s good news and bad news. The bad news is that there are no existing studies that detail the ability of cannabis to cure or treat symptoms of Lyme disease. The good news is that cannabis does possess potent antibiotic properties often overlooked that may help.

Much of the research on the topic comes mainly from anecdotal experiments. In them, those suffering from Lyme disease take matters into their own hands. Many of these accounts attest to the ability of cannabis to treat some of the debilitating symptoms of the disease. The most likely reason for these successes is the anti-inflammatory properties of cannabis. There is also a potential that the anti-bacterial properties of cannabis play a part, but both of these are only conjecture without more research.

A study published in the Journal of Natural Products (2008) [1]Giovanni Appendino, Simon Gibbons, Anna Giana, Alberto Pagani, Gianpaolo Grassi, Michael Stavri, Eileen Smith, and M. Mukhlesur Rahman. Journal of Natural Products. 2008 71 (8), 1427-1430. DOI: … Continue reading examined this in more detail. Researchers noted that the five major cannabinoids: CBD, CBC, CBG, THC, and CBN all demonstrated potent activity against an antibiotic-resistant strain of MRSA. The study also noted the seeming paradox of how chronic use of cannabis could have the potential to reduce immune function, given the nature of how these cannabinoids may work in the body as antimicrobial agents.

So overall, anecdotal claims suggest there could be benefit to treating Lyme disease with cannabis. This could be from the antibacterial potential of the plant, but even the researchers were quick to mention the need for further study on the matter before drawing conclusions.

Dr. Daniel Kinderlehrer is a leading expert on Lyme disease. He is adamant that cannabis does not directly treat Lyme disease. Rather, he says, supplementation of CBD may provide benefits that address some of the symptoms. With his own patients, he found it to be beneficial.

The benefits he cites are the analgesic, anti-inflammatory, and neuroprotective properties. He says they are valuable as an adjunct to the pharmaceutical treatments of tick-borne diseases such as Lyme disease.

RELATED  Cannabis Oil and Lyme Disease: Cannabis Helped me Get My Life Back!

The persistent nature of Lyme disease also makes it unique. Reoccurrence is common even after antibiotic treatment. In such cases, the prolonged use of antibiotics presents yet further problems in patients. As a result, Dr Kinderlehrer recommends cannabis to manage symptoms for ongoing chronic cases of Lyme disease.

Woman’s calf showing a bulls eye rash from a tick bite – See a doctor if you have this.

Lyme disease can be challenging to detect. For those who are unaware of having a tick bite, or when symptoms present in other forms, it’s often difficult for a doctor to make a diagnosis. But early detection is critical with Lyme disease. If caught early, doctors can prescribe antibiotics to rid the disease from the body. Treatment courses for antibiotics in Lyme disease can last for as long as a month. Following this, the relapse rate is as high as forty percent, and the risk of opportunistic antibiotic-resistant bacteria developing is also a strong possibility.

It is important to be aware of tick populations in your region. Take immediate action if bitten. Lyme disease is a severe condition that can change the course of someone’s life forever. But while cannabis use may help treat symptoms, it shouldn’t replace the now standard treatment protocol of antibiotics provided by a licensed professional.