What can ghee-based edibles do for autoimmune disease treatment?

People have been consuming cannabis-infused foods and drinks for thousands of years. In Hindu culture during the spring festival Holi, cannabis is consumed in a drink called Bhang, which is made by crushing cannabis and ghee together. In Buddhism, the Mahākāla Tantra prescribes cannabis medicinally. And of course, Rastafarianism believes cannabis to be sacred. Today, while some people continue to take cannabis spiritually, most consume edibles for recreational and medicinal purposes. Patients in autoimmune disease treatment in particular, multiple sclerosis for instance, are turning to edibles to help manage their symptoms. Ghee is a clarified butter that has been heated to remove milk solids, leaving a high fat liquid behind.

How Do Edibles Work?

Edibles are heated with fats such as butter and ghee, which helps to extract cannabinoids and allow the body to absorb these. Cannabinoids will not properly absorb into the body without a fat carrier. Ghee is higher in fat than butter and this is why is makes cannabinoids, like THC and CBD, more available.

Additionally, without heating cannabis with fat, the THCa and CBDa inside the plant matter won’t convert into the desired bioavailable medicinal compounds. This is why eating raw cannabis plant matter doesn’t produce any sort of psychoactive effect.

The immune system is one of the most complicated systems in the human body. Autoimmune disease treatment can affect different areas of the body. It should cause the immune system to stop attacking healthy cells. Over time, this leads to the infection and death of healthy cells, resulting in symptoms like brain fog, body aches, and seemingly inexplicable rashes.

That’s where cannabis comes in. Almost every body system is impacted by the endocannabinoid system (ECS) and associated receptors, including the lungs, muscles, and the brain. The non-psychoactive cannabinoid CBD, found in cannabis, has been shown (in preclinical trials) to help reduce inflammation by interacting with receptors outside of the ECS.

Moreover, researchers from the University of South Carolina stated that, “recent findings show THC can change critical molecules of epigenome called histones, leading to suppression of inflammation.” This is potentially great news for those struggling with chronic inflammation, but also those with multiple sclerosis. MS is, after all, not only a neurodegenerative disease, but also an “inflammatory immune condition”.

Multiple sclerosis is a complex autoimmune disease that affects neurons. Symptoms of multiple sclerosis primarily include muscle spasticity and pain. Two randomized controlled trials, looking at both pain and muscle spasticity, concluded that cannabis was able to help improve symptoms. MS can deeply affect a person’s ability to function normally in their daily activities. Selma Blair has perhaps most famously opened up about how severely MS has affected her entire life. Treatment for MS does not so far have a cure. And its pharmaceutical treatments are far from comprehensively effective.

As such, cannabis’s ability to treat two of the major debilitating symptoms of MS has boosted its popularity among MS patients. Furthermore, the convenience of taking edibles makes this treatment even more appealing. Edibles can be found in many different food types and liquid forms, such as:

RELATED  They Just Made Odorless Weed

Edibles have a longer effect on the body because of how the body metabolizes cannabinoids in the digestive tract. A prolonged duration of the effects of cannabis is important if you’re consuming cannabis medicinally, especially for MS patients who deal with constant symptoms.

Effects kick in around 30 – 90 minutes after consumption. This prolonged onset for the effects of edibles can be a downside for patients who are in need of immediate pain relief. But, edibles bypass the need for inhaling smoke and prevent potential damage to the respiratory system. And once the edibles do kick in, their effects are much more long-lasting than that of smoking or vaping cannabis.

How to Make Cannabis Ghee

Ghee is a class of butter that originated in India. Just like butter, ghee can be turned into a cannabis-infused fat for cooking and baking, especially with Indian and Middle Eastern dishes. You can also use butter instead of ghee for this (and any) recipe to broaden the variety of dishes you can cook.

Prepare any of your favorite recipes using this cannabis-infused ghee and enjoy. 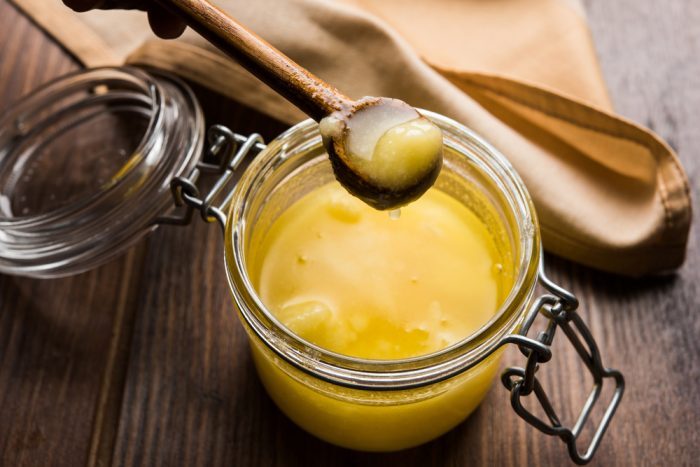 Ghee is a clarified butter originating in India.

A Warning for Your First Time-Consuming Edibles

It’s easy to overdo it with edibles. Since you don’t experience the immediate onset of any psychoactive effects, it can be easy to overeat without realizing just how much THC has been consumed.

Use the cannabis ghee sparingly and start small. Remember, you can always eat more, but you can never eat less.

Edibles are a fantastic way to get more medicine without having to smoke cannabis or sacrifice taste. Using the recipe above, you can create a delicious ghee butter that you can infuse with your favorite strains of cannabis and recipes.

If you’re suffering from symptoms of multiple sclerosis or any other autoimmune disease, then cannabis edibles may be an effective, discrete, and long-lasting way to help you manage your symptoms.