When I questioned my doctor about ovarian cancer and cannabis, he became defensive, angry even. So, I got a new oncologist.

My name is Elke and I have Ovarian cancer and use cannabis.

In April of 2016, I could not walk due to severe pain in my lower extremities. On a CT scan, they found a 15 cm mass on my left ovary; it was caught early at Stage 2B.

In May, they removed my ovaries, part of my colon, lymph nodes and omentum. I was in a lot of post surgery pain and was very weak when my oncologist told me I needed chemo. He prescribed Norco for pain. On Norco, I slept most of the day and still woke up in pain. I refused chemo knowing my chances of survival were not any greater. The reason for the chemo was to prevent it from coming back.

A Doctor Angry Over Cannabis

I asked him many questions about chemo and he became defensive, not supportive. He explained, that he had to follow AMA and Hospital rules and regulations. He became almost angry. So, I found a new oncologist.

In November 2016 my new oncologist recommended cannabis and handed me my medical cannabis card packet telling me she is filling her part in.

Thankfully, I received my medical cannabis card in January 2017 and went to purchase my first medicines at my Springfield, IL dispensary right away. I was recommended Indica by my online friends and RSO oil. I vaped for the first time. It was an incredible reliever for pain! Depression turned into laughter, but I still felt the pain in my colon. I started taking RSO oil and after one week I noticed the difference in my pain level going from a 9 to a 6. 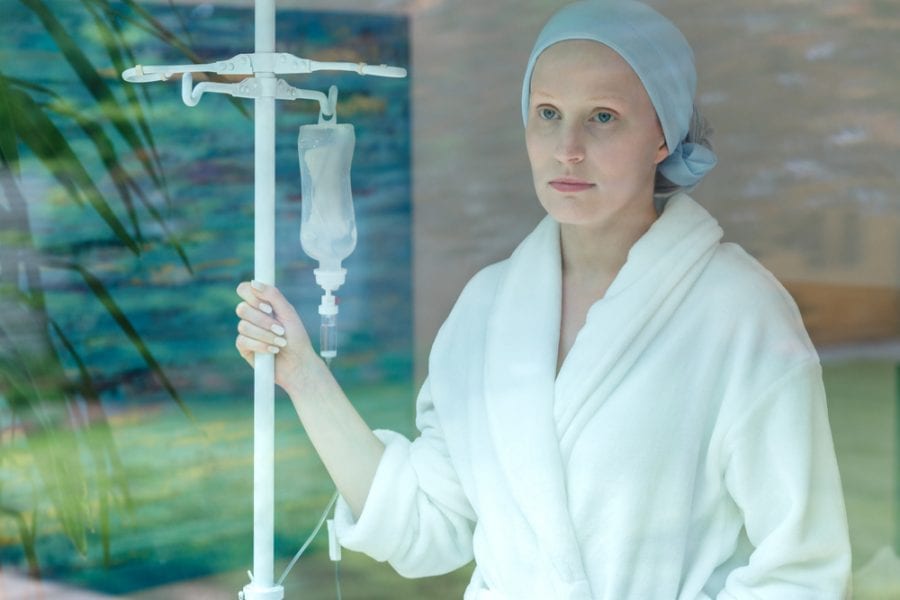 My oncologist continues to monitor my blood work. She is very pleased with my results. She stated, that she has had positive reactions to cannabis from her patients. This is why she recommended it to me.

The Science From RxLeaf

Ovarian cancer can be one of the deadliest forms of cancer a woman can get. The overall survival rate for epithelial ovarian cancer is 47% over five years, with the biggest determining factor continuing to be early detection. It’s one of those diseases that’s less fatal the earlier it’s discovered.

But no matter when ovarian cancer is caught, cannabis may help patients. Scientists are looking into the idea that by regulating the endocannabinoid system, specific cannabinoid compounds within the plant make an effective kind of cancer fighter.

How and Why Cannabis May Combat Ovarian Cancer

Ovarian cancer isn’t always a death sentence, but it is always difficult. The diagnosis isn’t just about the tumors. Because ovarian cancer occurs in a hormone-centric part of the body, the disease brings a lot of unpleasant side effects with it.

The symptoms of ovarian cancer include severe abdominal pain, nausea, a lack of energy, more frequent urination, mood swings, painful sex, and chronic dull aches in the lower back and thighs. Combine that with the side effects from the usual treatments for cancer, such as chemotherapy and radiation, and it’s easy to why the disease is so distressing. Ovarian cancer patients are in pain around the clock, fatigued, nauseous, and unhappy.

The good news is that cannabis treats nearly all of those symptoms — in addition to fighting the cancer itself. Test-tube trials show that THC helps induce apoptosis in cancer cells, and that includes ovarian cancer. Apoptosis is cell death. In layman’s terms, THC makes cancer cells explode when introduced to the test tube. While the THC is busy shrinking the size of tumors, other cannabinoids are on-hand to induce good feelings, lift moods, relieve pain, and boost the appetite, which ultimately gives the body more energy.

In 2017, doctors diagnosed more than 22,000 American women with new cases of ovarian cancer. Nearly 14,000 others died from it. This is not a disease to take lightly. The worst part is that ovarian cancer can be hard to spot because the outside symptoms start subtle and build over time.

That’s why it’s important to get regular pelvic exams at the gynecologist’s office. Pap smears do not find ovarian cancer. They find cervical cancer. The only way to catch ovarian cancer early is to stay vigilant about doctor visits.

In the developed world, ovarian cancer occurs most often in older women, meaning those over age 60. But it’s possible for women in their teens to develop the disease.

So while there’s good news about cannabis treatments for ovarian cancer, it’s still best to catch the trouble early.

It’s no wonder that oncologists are coming around to treating ovarian cancers with cannabinoids. It just works.