Study Looks At Cannabis For End of Life Care

Seventy percent of patients in end of life care report improved quality of life with cannabis.

Cancer is a major health problem that represents a significant financial and emotional cost to the patient, the family, and the entire health system of a country. It is estimated that there are 12.7 million cancer cases in the U.S. alone. Many of these cases will, sadly, progress to a palliative phase. How can cannabis help cancer patients with end of life care?

Palliative treatment of cancer includes therapy to alleviate pain and nausea. Sadly, unrelieved pain plagues seventy to ninety percent of patients.  Current pain relief treatments include opioids, which have eighty to ninety percent success rate. Some patients, however, achieve less success than that. A common complaint of opioids is a feeling of being “out of it” or “not present” to be with loved ones while transitioning from life. Additionally, when you combine pain with the brutal side effects of chemotherapy, including nausea and vomiting, the stress for the patient can become unbearable. It is clear that palliative cancer patients needs more options. Could that be cannabis? 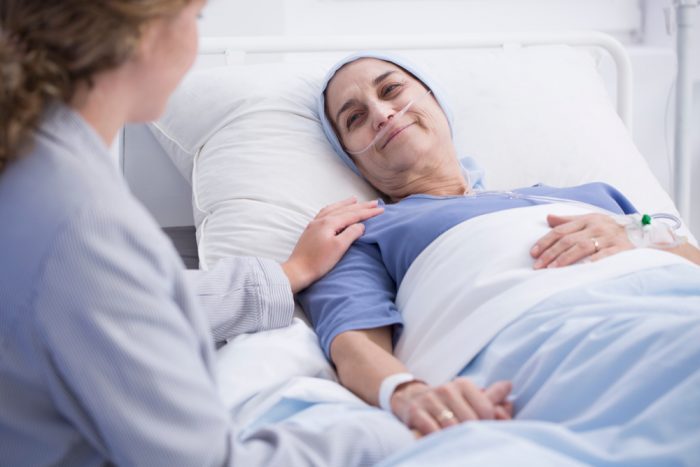 In 2007, the  Ministry of Health for Israel approved medical cannabis treatment for palliative cancer care. A study published in the European Journal of Internal Medicine looked at the general effectiveness of this treatment as reported by patients. At the time of the conclusion of the study (2018), sixty percent of medical cannabis patients were using cannabis to treat cancer symptoms.

During the period of the study (2015-2017), 3845 patients received a cannabis license and the researchers followed 2970 who consuming cannabis for cancer treatment. The Israeli medical cannabis license specifies two permissible methods of administration: oil and inflorescence (flowers, capsules and joints). Almost half of the patients (44 percent) have the license for the combination of oil and inflorescence.  The mean age was 59.5 ±16.3 yrs.

After six months, 50.8 percent of patients reported significant improvement to their cancer symptoms and 45.1 percent reported slight or moderate improvement. The most improved symptoms at this point were nausea and vomiting, sleep disorders, restlessness, anxiety, depression and headaches.

Cannabis treatment for the palliative cancer seems to be a safe, effective, and well-tolerated option for patients to cope with the malignancy related symptoms. Initially, less than twenty percent of the patients in this group reported that they expected a good quality of life. Impressively, after six months of treatment, about seventy percent of patients indicated a  significant improvement in quality of life.

Interestingly, thirty-six percent of patients taking the opioids stopped taking these altogether after the six months of treatment with the medical cannabis. It is very probable that the mechanism by which medical cannabis affects the common issues with cancer patients is very similar to the one by which opioids affect the same condition.

RELATED  The Importance of THC in Cannabis for Patients

This study is impressive and statistically significant. There is a caveat, however. The data comes from a company offering (selling) medical cannabis, in Israel. The scientists leading the study are paid by the same company. This is a clear conflict of interest. This may be allowed in Israel, but certainly is not common practice in North America. Scientists show bias if the goals of the company clearly influence their work. Firstly, this sways the results of the study for the company’s benefits. Secondly, this is a big ethical problem.

How to fix this? An independent study would need to follow in order to remove the threat of bias. A separate organization entirely would have to lead this study.

However, if such a study takes place, the results will likely match the previous study’s.  After all, what could lead to better quality of life than being generally more present than one is with opioid medication, while also experiencing reduced pain, and relaxation?

Does Cannabis Boost or Suppress Your Immune System?

Tush Kush: What You Need to Know About Suppositories