The Endocannabinoid System in Animals is Different than in Humans

Is it safe to use cannabis to medicate our pets?

It might surprise many pet owners to find out that the very same CBD that works for the human body could also have therapeutic applications for their furry friends. Research is only in its infancy, but remains promising. Interestingly, cats, dogs, and many other animals have something in common with their owners: an endocannabinoid system.

Researchers rely on laboratory animals, such as specially bred rats and mice, as an early phase of medical research. Still, beyond these applications, scientists know little about the endocannabinoid system of other vertebrates or invertebrates. While the endocannabinoid system of animals has many similarities to the human version, there are important differences. These differences impact cannabis for veterinary care so pet owners should take note.

Do all Animals Have an Endocannabinoid System?

Robert J. Silver, the Chief Medical Officer of RxVitamins, published “The Endocannabinoid System of Animals” in the journal Animals (2019). According to Silver’s research, there are few creatures who do not have an endocannabinoid system in some form or another.

So far, the only animals with no known endocannabinoid system include insects and a microscopic single-celled creature known as Phyla Protozoa. Otherwise, scientists believe creatures from all walks of life, including mammals, birds, fish, reptiles, and even nematodes, at the very least have a primitive endocannabinoid system. 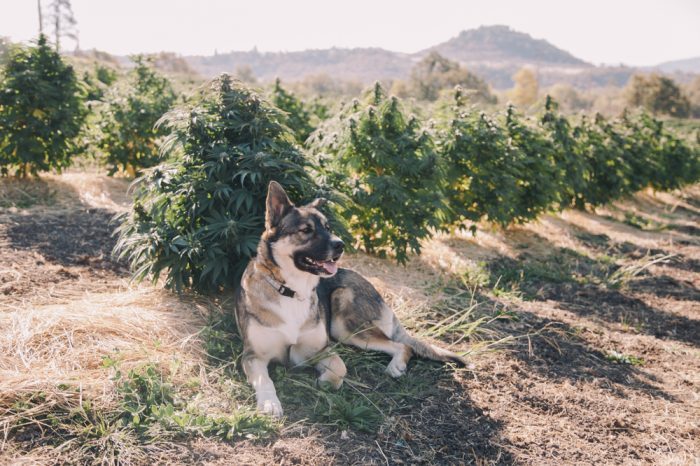 All About the Endocannabinoid System in Animals

The endocannabinoid system has become a novel therapeutic target in human medicine. As per Silver’s educational summary on the subject, “there is still a paucity of information regarding the same benefits in animals, except for the laboratory animal species in which experimental studies have been performed.” Compared to what medical researchers have uncovered about the “human animal,” veterinarians and biologists know much less about the other creatures on earth.

Be Careful With Dogs and THC

There are important differences between animals, however. Some of these are significant for pet owners regarding the consumption of cannabinoid medicine for pets. Not all endocannabinoid systems are equal when it comes to cannabis. Pet owners and veterinarians need to understand the critical differences to keep animals safe.

THC is a CB1 receptor agonist, and if dogs ingest it, their endocannabinoid system is quickly overwhelmed. With so many more CB1 receptors, dogs are at risk of THC overdose and death, through a condition known as static ataxia.

Therapeutic Applications of CBD for Pets

Market analysts expect the CBD pet industry to reach $1.16 billion by 2022 in the U.S. alone. Companies are banking on preliminary science to market veterinary applications for this non-intoxicating cannabinoid. Logically, if dogs, cats, and other furry-pets have a similar endocannabinoid system to humans, the public assumes there is a significant overlap in medical applications. But this is a potentially dangerous conclusion.

RELATED  Did a Mother's Cannabis Consumption Cause NeoNatal Death

The endocannabinoid system modulates the nervous and immune systems and other organ systems. It does this through a complex network of receptors and chemical signaling molecules to relieve pain and inflammation. It also modulates metabolism and neurologic function, promotes healthy digestive processes, and supports reproductive function and embryologic development. 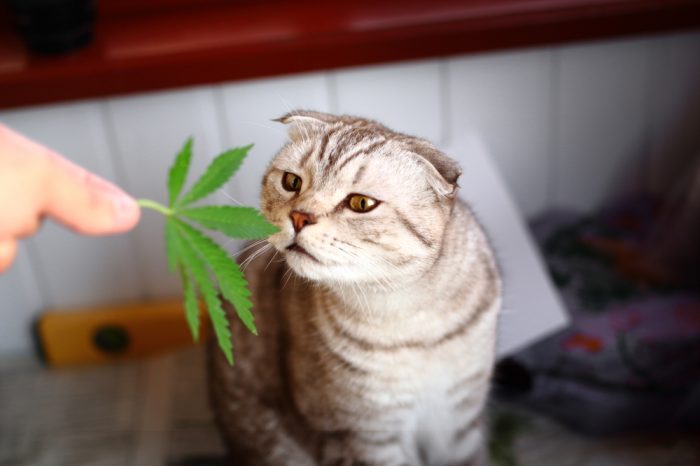 A Word of Caution About Using Cannabinoids for Pets

Not all cannabinoids are safe for applications with pets. As detailed by Silver, scientists have already determined dogs are highly susceptible to toxic reaction, and possibly death, following THC exposures. At this time, dogs should not be medicated with THC.

In Silver’s analysis, “the psychoactive effects of THC are undesirable in all veterinary species.” While researchers are exploring ways to titrate THC for veterinary applications safely, it is strongly recommended that pet owners stick with CBD-only products.

Unlike THC, CBD is not a cannabis-receptor agonist so there is an assumption that it’s safe for consumption among cats, dogs, and other mammalian pets. The American Veterinary Medical Association is still cautioning against prescriptions for CBD by their members, but that hasn’t stopped many vets from incorporating it into their own practices. The hesitation about CBD in veterinary practice is the same for humans: a lack of clinical research.

For pet owners wanting to incorporate CBD into treatment plans for their furry friends, the best advice is to work with their veterinarian. While several preliminary studies prove CBD is well-tolerated by dogs, it’s still early days. There is a long way to go before veterinary science understands all possible interactions, long term effects, and therapeutic applications.

Extra precaution should be taken if your canine or feline companion is on other medications as, according to Silver, “no definitive objective study exists accurately and objectively, which defines the herb-drug interactions between CBD and selected pharmaceuticals in veterinary species.”

A vet can advise on whether CBD is a good fit based on the animal’s history and current medications. So always consult a professional before medicating your pet with cannabis.

The Benefits and Risks of Using Cannabis for Pets