Is Cannabis Really a Good Idea for Glaucoma?

Increased eye pressure is a hallmark symptom of eye disease, and cannabis may make that worse.

It’s no secret that both American and Canadian demographics are shifting towards an increasingly older society. And as our populations age, there is also a rise in age-related illness. Illnesses like glaucoma will become more frequent over the next few years. In fact, by 2020, the data suggests there will be 3.3 million people diagnosed with glaucoma in the US alone. Medical cannabis has long been used to treat glaucoma. As far back as the 1970s research found evidence that cannabis may help reduce the symptoms of the disease, like increased intraocular eye pressure. However, today there are few eye doctors prescribing cannabis despite the growing public support for the plant’s therapeutic purposes.

With the growing push for medical cannabis, an aging population, and rising interest in the plant from seniors, there will likely be exciting developments over the coming years. In all likelihood, there will be a revived interest in finding a better treatment for glaucoma. Which leads us to ask, will people turn towards cannabis?

The long history of scientific study is worth examining. Initially, there was pretty sound support for cannabis’s ability to reduce ocular eye pressure, but many medical organizations remain opposed to it. Why this difference of opinion?

Before tackling the research, let’s first understand the basics of the disease, from progression to symptoms to conventional treatment.

Glaucoma is typically (although not always) an age-related illness caused by an increase in intraocular pressure. This is called ocular hypertension and is an increase in pressure within the eye. In the early stages of the disease, there are only a few symptoms, which make it very hard to catch.

As glaucoma progresses, the increased pressure in the eye begins to damage the optic nerve. Usually, the increase in eye pressure doesn’t cause pain. However, if left untreated may damage the peripheral vision, and eventually cause blindness.

As the disease progresses, it becomes impossible to reverse the damage to the optic nerve and to eyesight. Modern treatments almost always start with eye-drops aimed at reducing the pressure, but can also include surgery and laser treatment.

A Review of the Research into Eye Pressure and Glaucoma

In the 1970s, early research into cannabis for glaucoma earned a significant amount of attention because the studies showed both THC and cannabis had a measurable effect on intraocular eye pressure. This led the US federal government to allow a select few patients access to cannabis under the compassionate care clause.

Following these initial results, there was a flurry of activity around cannabis’s ability to reduce eye pressure. Researchers applied THC eye drops and studied the intraocular pressure of people who smoked cannabis. They even looked at THC’s effects when injected. Each method produced positive reductions in eye pressure. 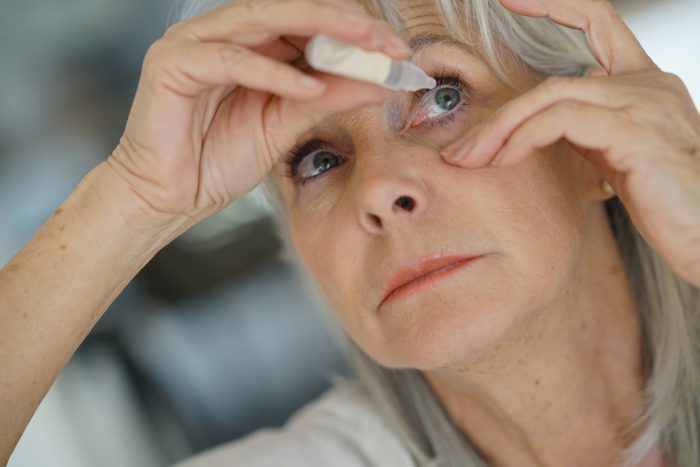 For the last two decades, however, the excitement around THC for glaucoma has died down. Unlike many other cannabis uses under investigation, there are no clinical trials examining cannabis and glaucoma at the time of writing this article. On top of that, many national organizations dedicated to eye health (The Glaucoma Foundation,  American Academy of Ophthalmology, and Canadian Ophthalmological Society) have all come out against treating glaucoma with cannabinoids.

What gives? How did these exciting scientific discoveries come to a screeching halt?  Where is the research today?

The Truth of Cannabis and Glaucoma

New pharmaceuticals for glaucoma have fewer adverse reactions than their predecessors. These medications also last longer than cannabis does. So doctors haven’t been willing to jump on board with cannabis as a treatment.

In the 1970s when cannabis for glaucoma was gaining attention, the available pharmaceuticals for the disease came with many adverse reactions. For one, they were unpleasant to take. So it made sense that some patients would want to explore options like THC, which had fewer side effects and sometimes better results.

Additionally, THC has thus far only proven useful for reducing intraocular eye pressure for a few hours at a time. Continuous dosing isn’t necessarily an issue; it’s the up and down fluctuation which experts are concerned about, as it may lead to more damage over the long term.

A Final Word on Glaucoma and Cannabis

According to a recent publication by the National Academies Press, which compiled thousands of studies on cannabis, there is “limited evidence that cannabinoids are an ineffective treatment” for glaucoma. In their deep analysis they conclude “to be effective, treatments targeting lower intraocular pressure must provide continual rather than transient reductions in intraocular pressure. To date, those studies showing positive effects have shown only short-term benefit on intraocular pressure (hours), suggesting a limited potential for cannabinoids in the treatment of glaucoma.”

Other reviews have suggested that there may be a use for cannabinoids yet, in extremely advanced cases where other medications have failed. But, with no clinical investigations underway, there seems to be little interest in it. Cannabis may still be a common at-home remedy for reducing glaucoma eye pressure, but new medications may prove safer for longer-term relief.