How the Black Market has Shaped Modern Farming Technology

Farming technology has been given a boost by the innovation of black market growers.

They say necessity is the mother of all inventions. That’s never truer than when it comes to cannabis and farming technology.

While traditional crops have long benefitted from advancements in farm tech, prohibition has kept cannabis away from the limelight. But where there’s a demand, there’s a solution. The need to supply millions of people with a plant that can’t be grown in the open created a remarkable proliferation of sophisticated indoor growing methods.

Now, thanks to the increasing legalization of cannabis, cultivators are finally sharing those methods openly. They’re broadening the minds of traditional agricultural workers who have missed the advent of new cannabis farming technology. At the same time, cannabis is benefitting from more traditional harvesting techniques — most of which cultivators are only just beginning to apply to the plant.

Illegal Farming Technology to the Rescue

Cannabis grow operations have faced one major hurdle that’s nearly unique to the plant: It had to be grown indoors. That means no sun. It’s an unnatural way to sustain life.

Instead of planting acres of weed, many cannabis workers pioneered indoor farming methods that could work in tight spaces, with limited light exposure, and not much water. The work of these growers is now helping urban gardens feed thousands in big cities across the globe. 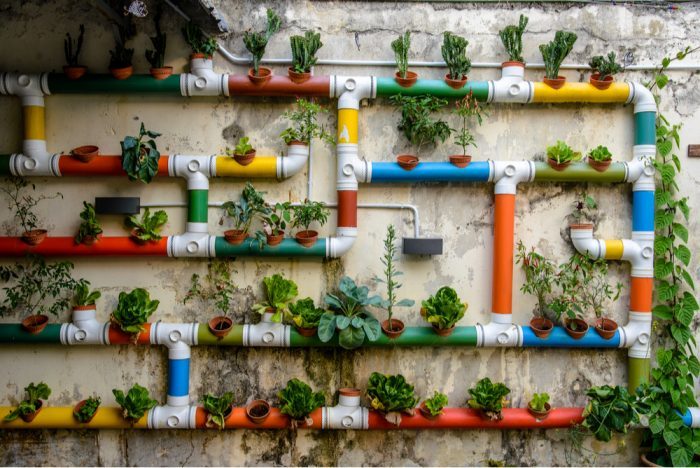 The time for urban agriculture has come. As the world population booms, we need more food, and traditional factory farming just can’t keep up with demand. There are too many people packed too densely for supply chains to effectively reach everyone.

Urban gardens have sprung up to feed city populations without straining traditional resources. Today, the U.N.’s Food and Agriculture Organization estimates that urban farming accounts for 20 percent of all food grown and eaten in the world.

The most noticeable farming technology import from cannabis has to do with the shape of crops. Because cities face the same space restrictions of cannabis cultivators, city growers have adopted the “vertical farming” method that has long been a staple of cannabis operations.

This is a method of hanging plants on top of each other. It uses 90 percent less water and produces up to 70 percent more food than traditional farming technology. It also requires fewer pesticides, less fertilizer, and supposedly leads to better-tasting fruits and vegetables.

And we have cannabis to thank for it. While vertical may be the Next Big Thing for urban food safety and supply, cannabis growers have been harnessing that farming technology for decades. In weed circles, it grew out of hydroponic growing practices, sometimes referred to as “dro,” which was rumored to produce premium cannabis.

Cannabis growers were also instrumental in the advancement of aeroponic farming technology. Aeroponics is the practice of growing plants by suspending their roots in the air instead of the soil. It’s technically a form of hydroponic gardening, and a big part of vertical farming.

Instead of soil, a thin sheet of coco coir or other growing medium holds the roots in place. Cultivators then mist the roots with nutrient-packed water. It was created to help foster research, but cannabis cultivators took it to the next level. And it turns out, it’s a big hit.

Without the restriction of soil, the plants grow at a rapid clip. The roots don’t have to work as hard to suck up nutrients, and the increased oxygen they can pull out of the air help them sprout faster. And because dirt doesn’t absorb any of the water, the plants require less water to stay healthy and hydrated.

In these systems, the plants must be sprayed with water every few minutes. So a proper system is essential — and that’s exactly what cannabis growers gave to modern farming technology. Or part of it, anyway.

The other big contribution from cannabis helps the other end of the plant — the part that grows toward the sun. 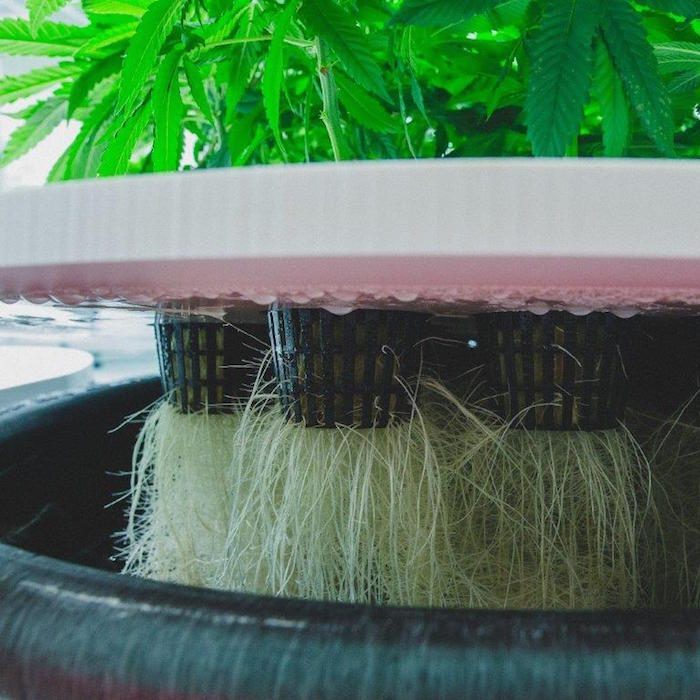 Like all plants, cannabis undergoes photosynthesis — turning sunlight into energy. It’s a necessary part of the plant’s life cycle, and a big problem for indoor grow operations. Keeping grow lamps for 1,000 cannabis plants runs a hefty electricity bill, so growers needed to find a more efficient way to keep plants lit without absorbing all their profit.

Cannabis growers were among the earliest adopters of light-emitting diodes for their crops. LEDs have been around for years, but cultivators are only just uncovering their use in farming technology as more and more cannabis growers come out of basements to start legitimate businesses.

LEDs use less electricity than traditional light sources, and have the benefit of running the entire spectrum of the rainbow. It’s not only better for the environment (and farmers’ pocketbooks), LEDs also result in higher-quality cannabis. The plant gets only the type of light it needs and nothing extra.

Cannabis growers may have pioneered advances in farming technology out of necessity, but thank goodness they did.

Now all sorts of plants are benefitting from the hard work that these growers put in behind closed doors. Today, gardeners anywhere in the world can grow more crops with fewer resources. And what’s more, they can do it year-round.

It’s safe to say we have cannabis to thank for the food security of the future.