Fibromyalgia symptoms started when I was 5 or 6 years old and so began a long, downward spiral of misdiagnosis and wrong medicine that only cannabis could stop.

My medical journey started when I was probably 5 or 6 years old. As a child, I was always very active but I would also always complain about being tired and achy. My parents would just chalk it up to playing outside and “growing pains.” I would later face misdiagnosis of the fibromyalgia as immune disorders, before ultimately doctors got it right. Even then I had to fight to get the correct medicine for me – cannabis.

As I got older, these “growing pains” would become more frequent. In my teenage years, it was less of “growing pains” and more suspected to be menstrual pains as it focused in my back, but the pain was also throughout my whole body. Exhaustion grew worse as well and I would get sick more often too, leading people to say “maybe you’re pregnant!” (Never had a pregnancy scare and always was safe when it came to sex).

Misdiagnosis Leads to Depression And Fibromyalgia

My depression grew due to lack of sleep and I ended up developing an eating disorder in high school. Thankfully, after I graduated, I beat my eating disorder. As I became more active and an adult, my pain just kept getting worse. Being that as a child I was told it’s either growing pains or menstrual pains, I just thought it was normal. As I hit age 25, it was just getting worse. Pain had worsened in my back, spread to my hands and arms, and my legs and feet. Then I barely slept. And, I had such depression and such bad anxiety that I could barely get groceries. I would have breakdowns because there were too many people around me.

Autoimmune Misdiagnosis – Not Fibromyalgia Yet

I finally saw a doctor and was misdiagnosed with autoimmune diseases. After further testing, they told me I needed to lose weight and exercise more (I’m 5″7′ and weighed 140 so I’m stocky but very active). The doctor put me on several different pain killers, I cannot remember the names, but none of them helped.

I decided to find a new doctor who would listen to me and my pain. My new doctor pursued lots of testing and finally diagnosed me with fibromyalgia, depression, anxiety, carpal tunnel syndrome, chronic exhaustion, and insomnia. I tried a few more pain killers and some sleeping pills which also didn’t help. I tried an anti depressant and that did nothing.

A friend of mine who smokes cannabis recreationally suggested I look into the benefits of cannabis. I did my research and decided I should try it. I found a doctor who prescribed cannabis and started immediately.

How She Consumes Cannabis For Fibromyalgia

So I started using an indica strain and a sativa strain. During the day, I use the sativa in a CBD oil so I can work. Generally, I use .35ml two times a day to help manage my pain, anxiety, and chronic exhaustion. Later, I smoke two  grams of indica throughout the evening after work to manage my anxiety, pain, depression, and insomnia. Cannabis has changed everything. Because of having cannabis, I decided to go off my anti depressants. This obviously sent me spiraling into withdrawal, but thankfully the cannabis also helped with that.

Cannabis has changed my life and I could not be happier that I tried it. Overall, I have my friend to thank, (so much) for introducing me to it. Further, I will always suggest to people to try cannabis instead of harmful pharmaceuticals. Even I still have bad days where I have my flare ups and have anxiety but I have less bad days now. But there is hope out there for everyone, you can’t have no in your heart. Cannabis has made it so I can enjoy my hobby again, which is back yard mechanics. I am so much happier now! 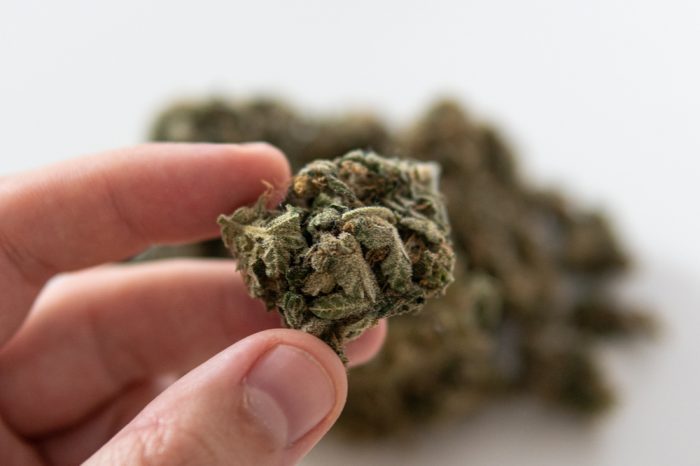 According to a piece by the Integrative Practitioner, perhaps as many as two-thirds of people with fibromyalgia get a fibromyalgia misdiagnosis first. As there is no definitive test for fibromyalgia, physicians must resort to a sometimes lengthy process of elimination. As this patient details, she went through years of treatments, appointments, and confusion before she received the appropriate diagnosis.

An Examination of Cannabis for Fibromyalgia

For those with fibromyalgia, the above story probably hits home in more ways than one. Many patients have gone through a laundry list of medications to treat the many different symptoms of fibromyalgia, only to settle on cannabis in the end.

Some of the most common experiences related to fibromyalgia are targets for the therapeutic action of cannabis—for example, fatigue, chronic pain, and insomnia. As fatigue may have something to do with the endocannabinoid system, cannabinoid therapy is already under preliminary investigation.

As far as chronic pain goes, it is one of the few therapeutic benefits endorsed by the National Academies Press [2]The Health Effects of Cannabis and Cannabinoids: The Current State of Evidence and Recommendations for Research. (2018). Journal of Medical Regulation, 104(4), 32–32. doi: … Continue reading in their pivotal 2017 publication. Also, anecdotally cannabis and sleep go hand-in-hand, recent research has found THC’s interaction with the CB1 receptor, which seems to trigger sleepiness.

In almost all cannabis-focused research, the plant consistently has a better safety profile than the opioids, sleep-aids, and other medications patients replace it with. Which means, it has better patient adherence in many cases. It’s no wonder that patients, like the story of fibromyalgia misdiagnosis highlighted above, eventually choose to move off prescriptions and towards an all-natural therapeutic alternative.

Cannabis Restored My Body From Fibromyalgia, Seizures, and Pain

Bladder Pain Woke Me Up Every Hour Until Cannabis

The Day I Tried Cannabis for Fibromyalgia Changed Everything