Cannabinoids interact with each cannabinoid receptor type in the body.

The most famous cannabinoid receptor type, CB1 and CB2, are proteins embedded in cell membranes. These surface proteins then attach to another protein. This protein determines the signaling direction: activation or inhibition (THC, for example, activates). The signal that goes out depends on which molecule binds to the receptor. Cannabinoids also activate many other receptors in the human body. 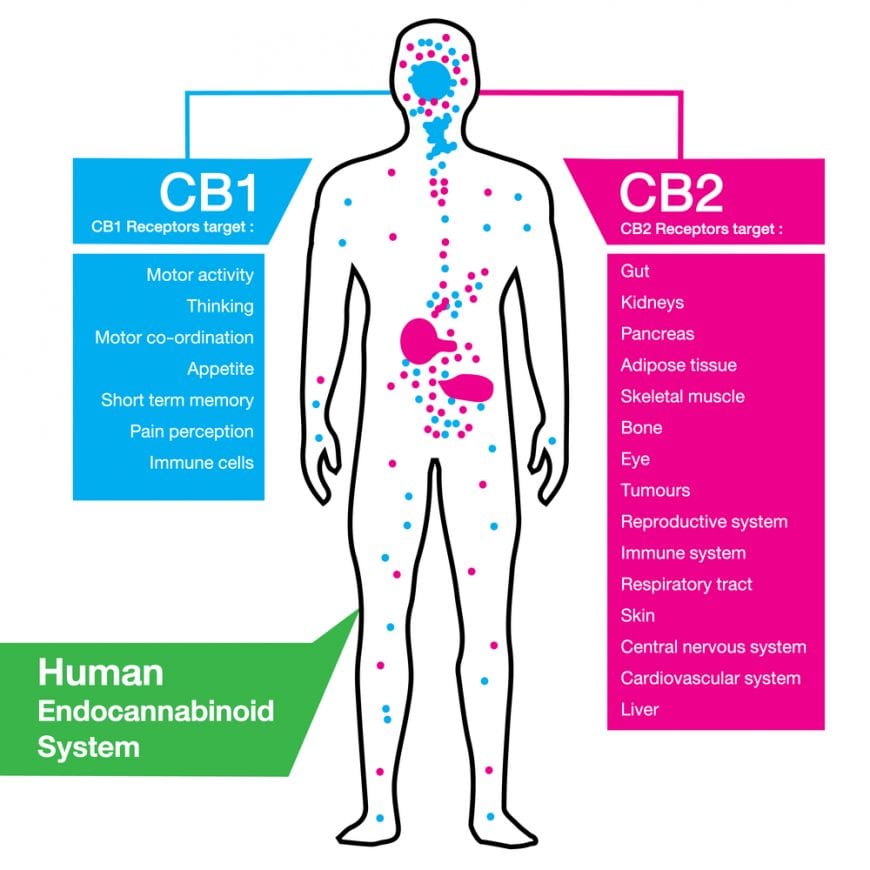 CB1 and CB2 Receptors Are The Most Common

The main difference between the two is in their distribution throughout the body: CB1 is highly expressed in neurons within the brain (except the respiratory center, where it is almost nonexistent). CB2 is present in 100-fold lower numbers in the central nervous system and mainly expresses on immune cells, including those of the brain (called microglia).

The classical effects, in the brain, for  CB1 activation are reductions in neurotransmitter release. CB2 activation dampens microglial activation and reduces neuroinflammation. These are the basic mechanisms to reduce pain ( scientists call them “antinociception”).

A unique feature of CB1 and CB2 receptors is their ability to “team up” with other neuroreceptors, such as dopamine, opioid, orexigenic (regulate appetite) and adenosine. This cooperation changes their neurotransmission.

In the periphery of the body (outside the central nervous system), reduction of inflammation and neuropathic injury has been primarily ascribed to the activation of CB2. CB2 receptors are present in the peripheral nerves, as well as within the inflamed linings of the joints and skin. Reduction of colitis in rodents, for example, has been possible using CBD acting through CB2. Doctors also managed it with cannabigerol (CBG) acting through CB2. 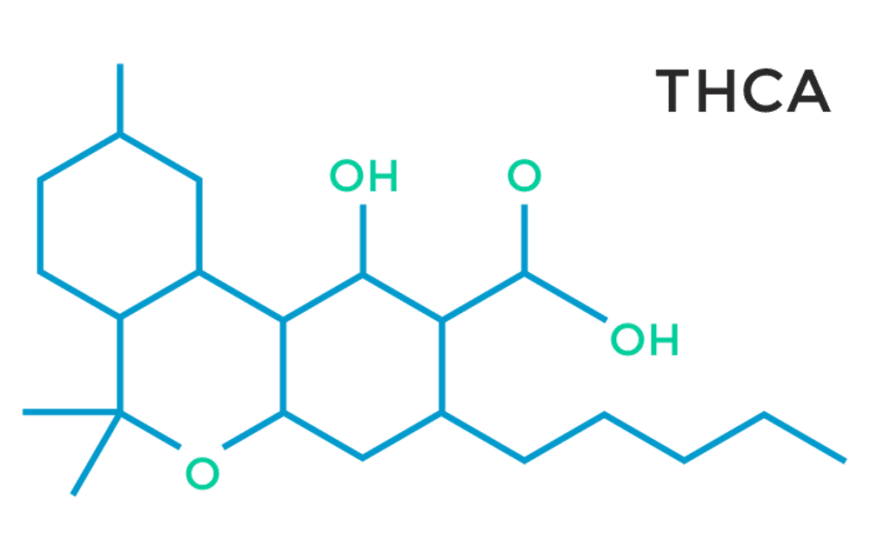 A more recently discovered cannabinoid receptor of the non-classical type is GPR55. Like CB1 and CB2, GPR55 also attaches to the cellular membrane. It associates with an effector protein inside the cell. GPR55 is part of the central nervous system, expressed in the hypothalamus, thalamus, and midbrain. It modulates antinociceptive responses in animals. GPR55 activation can either be pro- or antinociceptive depending on the type of injury.

For example, co-activation of CB2 and GPR55 increases microglia activity and neuroinflammation, while CB2 alone decreases these responses. The anti-inflammatory and pain relieving effects of CBD come from how CBD is an inhibitor (antagonist) of GPR55, coupled with the fact that it activates CB2.

The effect of THC is a bit cloudier, as some studies reported agonist behaviour and others no effect on GPR55. Our knowledge of GPR55 potential in therapeutic applications is definitely in its infancy and we need more studies to explore its effects further.

Another non-classical type of cannabinoid receptor is PPARg, which operates by a completely different modes of action compared to CB1, CB2 and GPR55. It belongs to a nuclear hormone receptor family, which, when activated, makes alterations at the level of gene expression. Unlike classical receptors that embed in the cellular membrane and exert their actions via activation of signaling cascades within the cell, PPARg directly affects expression of genes involved in inflammation. Doctors have found it in many tissue types, including adipose, muscle, brain and in immune cells. Endocannabinoid anandamide also interacts with PPARg. 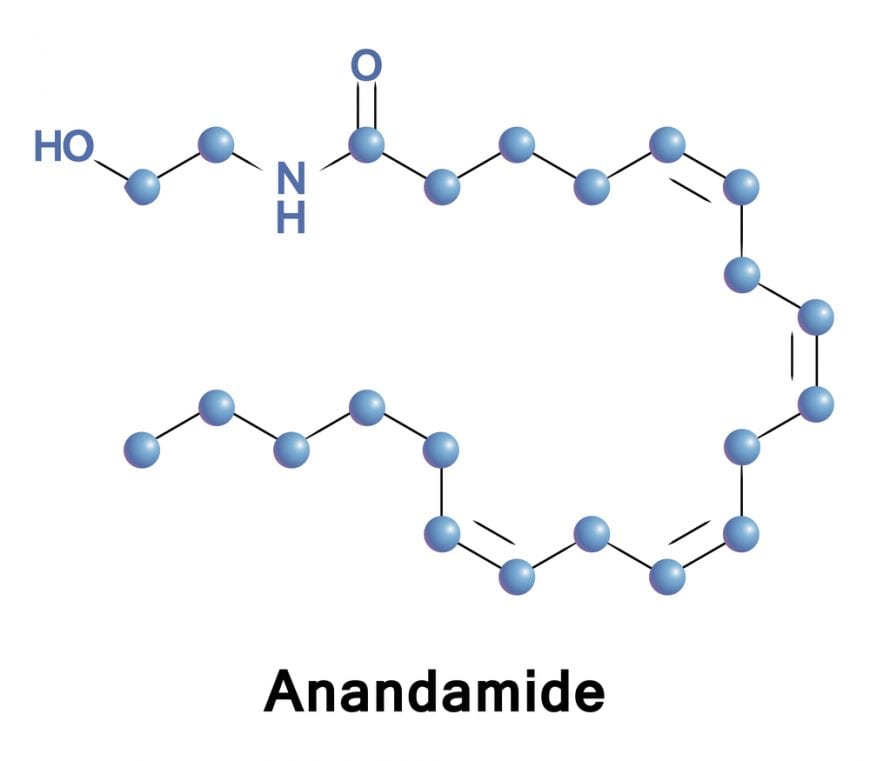 Multiple in vivo studies have shown that CBD reduces neuroinflammation in diseases such as dementia and Alzheimer’s disease. Some suggest that the mechanism of action involves CBD acting as PPARg agonist. Namely, when CBD activates PPARg, there is reduced gene expression in inflammation from oxidative stress. Basically, this decreases neuronal cell death in studies, and promotes neurogenesis in mouse models of Alzheimer’s disease.

Additionally, a recent study showed that the acid form of THC, Tetrahydrocannabinolic acid (THCa), found in the raw plant, has a similar effect on PPARg. THCa activates PPARg with more potency than its decarboxylated counterpart THC. This explains why THC is a proven neuroprotector in mouse studies. THCa also improves motor deficits, prevents neurotoxicity, and reduces neuroinflammation.

Cannabinoids also exert their actions on the ion channel, TRPV1. This ion channel is different from usual cannabinoid receptors in that it allows passage of specific ions (sodium and calcium), that trigger a painful burning sensation. Known activators of TRPV1 include temperature above 43C (which is a protective mechanism that will make us seek strategies to cool off), acidic conditions (such as when we eat a hot chilli pepper), or eating a compound in wasabi.

RELATED  So Many Ways to Take CBD - Which is Your Favorite?

Furthermore, CB1 occurs along with TRPV1. TRPV1 ion channels have desensitization potential. This explains why we build tolerances to increasingly spicy food.

Here is an interesting application of the interaction between cannabis, TRPV1, and capsacin (the compound that makes peppers hot). Cannabinoid hyperemesis syndrome is a clinical disorder. Severe nausea and vomiting characterize it. However, and oddly enough, rubbing capsacin on one’s skin solves the disorder.

The full characterization of the interplay between TRPV1, capsacin and hyperalgesia has not been completed yet, but would nevertheless be useful, because relief with capsacin may spare the patients the unnecessary laboratory tests and examinations and potentially harmful opioid use.

One day, we hope that we’ll have enough information about the different versions of cannabinoid receptor type and their interplay between cannabinoids that we can specifically control pain and inflammation using cannabis medicine.