From edibles to bhanga, yogis are embracing the roots of cannabis-friendly mindfulness in the ganja yoga studio.

We often talk about cannabis as a medicine, a supplement, or even as food. If that’s the case, then cannabis should perfectly complement other healthy endeavors, like yoga. Ganja yoga.

Yoga is an ancient Indian discipline that goes back at least 2,000 years, possibly as far back as 5,000 years. In the West, the media usually present yoga as a series of breathing exercises, stretches, and motivational speaking. Really, yoga is all about mindfulness, being aware of your surroundings, your relationships to others, and most of all, your inner self. 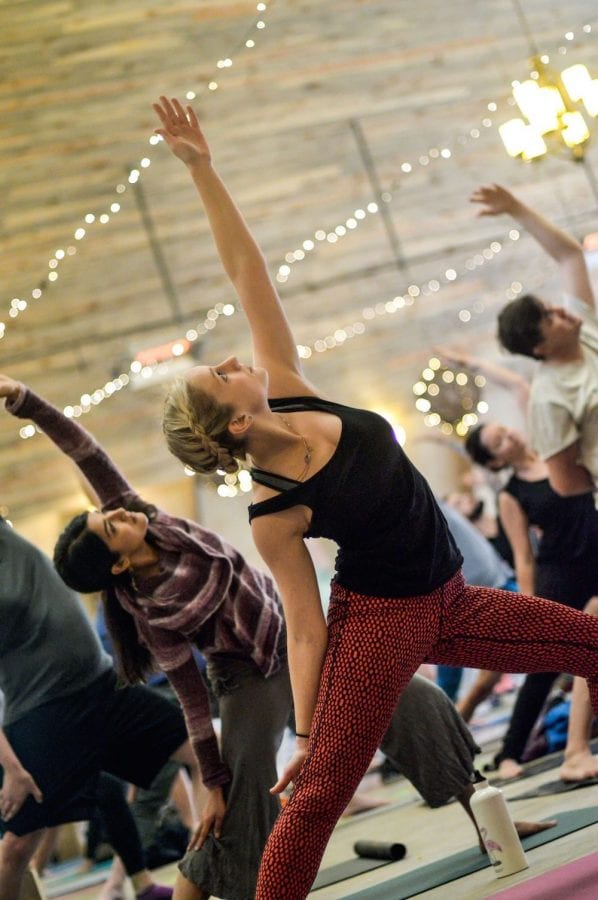 The evidence for yoga’s health benefits are overwhelming. Recent research suggests yoga, like cannabis, can improve the quality of life for people with a broad range of physical ailments, including multiple sclerosis, depression, pain, and breast cancer.

Ganja Yoga: The Real History of Cannabis and Yoga

Like yoga, cannabis use in India also has a long history. Although details remain murky, some scholars believe Indian healers used cannabis to make a mysterious elixir called soma. The Athravaveda, a Hindu holy text composed sometime between 1500 to 1000 BCE, lists bhanga as a sacred medicinal plant. Today, Indians know bhang as a dairy drink made with hashish. Government-sanctioned stores can dispense bhang much like medical cannabis dispensaries in North America. Some scholars disagree that the bhanga in the Athravaveda refers to bhang, as the root for both words roughly translates to “weed.” 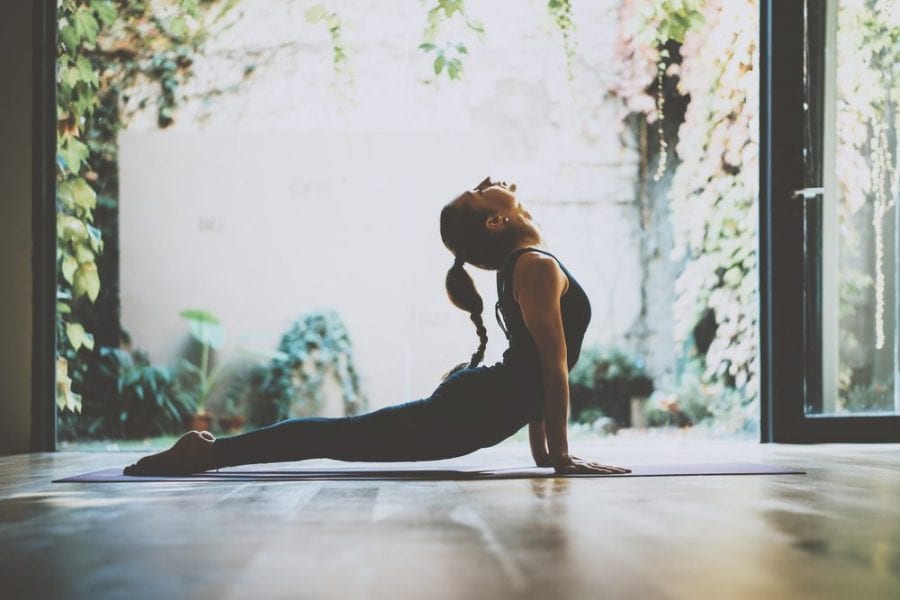 The earliest known documented instance of cannabis as a medicine in India comes from the Sadrasa Nighantu, a pharmacopeia of medicines categorized by taste. The text lists vijaya as a treatment for a host of conditions; vijaya undeniably translates to “cannabis,” placing this documented instance sometime between 800 and 1000 CE.

Cannabis’s roots in yoga go deeper than herbal preparations. Indians traditionally associate cannabis with Shiva, the god of destruction, creation, and meditation. Shiva also happens to be Adiyogi Shiva, the god of yoga. However, unlike Western approaches to “recreational” use, cannabis as a spiritual aid rarely goes unsupervised, as it’s believed to be tamasic, meaning yogis believe cannabis aligns the mind and body with cooler, heavier, darker energies (as opposed to rajas, the qualities of heat, motion, and excitement).

As cannabis legalization sweeps across the world, westerners have rapidly reunited cannabis with yoga. Studios in Colorado, Washington state, Nevada, California, and Canada offer classes where practitioners can combine yoga with cannabis use.

Due to legal issues, yoga studios and yogis do not dispense, sell, or otherwise provide cannabis. Rather, these classes exist solely as “bring your own cannabis” events, where practitioners may consume cannabis on site in whatever form they choose so long as it’s their own. You are able to create your own ganja yoga mindfulness with your favorite strain. 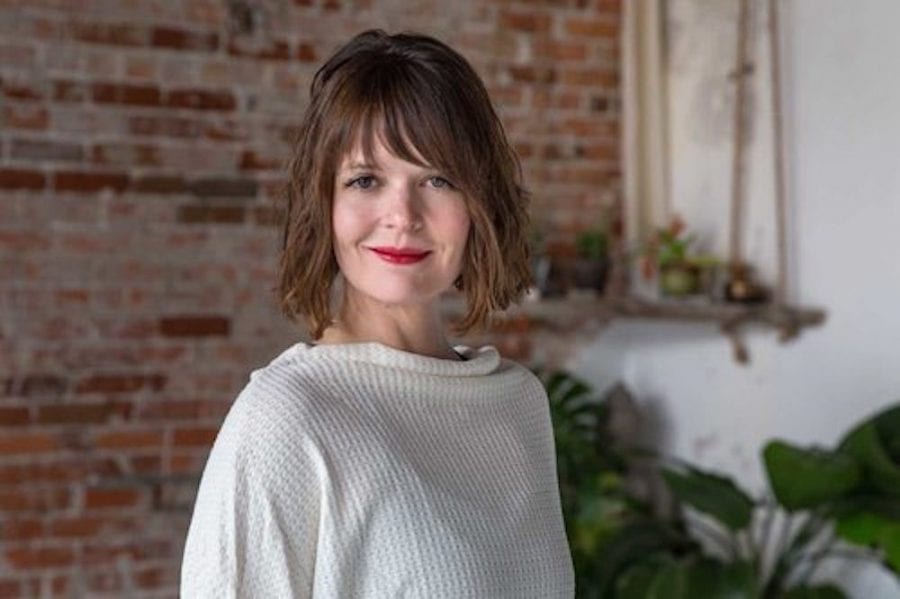 Mulvey first got the idea for Marijuasana while living in Colorado. She noticed her peers in her yoga classes consumed cannabis, but they only whispered about it.

“I think you should smoke weed while doing yoga,” she told RxLeaf by phone. “The endocannabinoid system is our mind-body connection. So when you’re doing movement, like pilates and yoga, you’re attempting to use your mind to really get into your body.”

The endocannabinoid system, a physiological system like the nervous or respiratory systems, regulates our bodies’ homeostasis, a state of well-being and balance. Part of this system relies on CB receptors, tiny protein channels located on our cells. These receptors trigger or tune down specific biochemical signals. THC interacts with the CB1 receptor, which is found primarily in the brain and spinal cord, so this mind-body connection mentioned by Mulvey isn’t metaphorical. It’s real.

Yoga and the Endocannabinoid System

One can think about the endocannabinoid system as a communication network throughout the body. It allows the brain, the organs, and the cells to keep in touch with one another to ensure everything is working smoothly. But Mulvey notes that bringing cannabis into yoga does more than simply facilitate health; it appears to facilitate open-mindedness while diminishing fears, too.

“The typical clientele I usually see for yoga and pilates are middle class white women,” she admits. “With Marijuasana, the clientele I get is diverse. People of every age, of every background, of every color of skin. I especially love that people of color feel comfortable coming, because I do feel yoga suffers from that stereotype.” 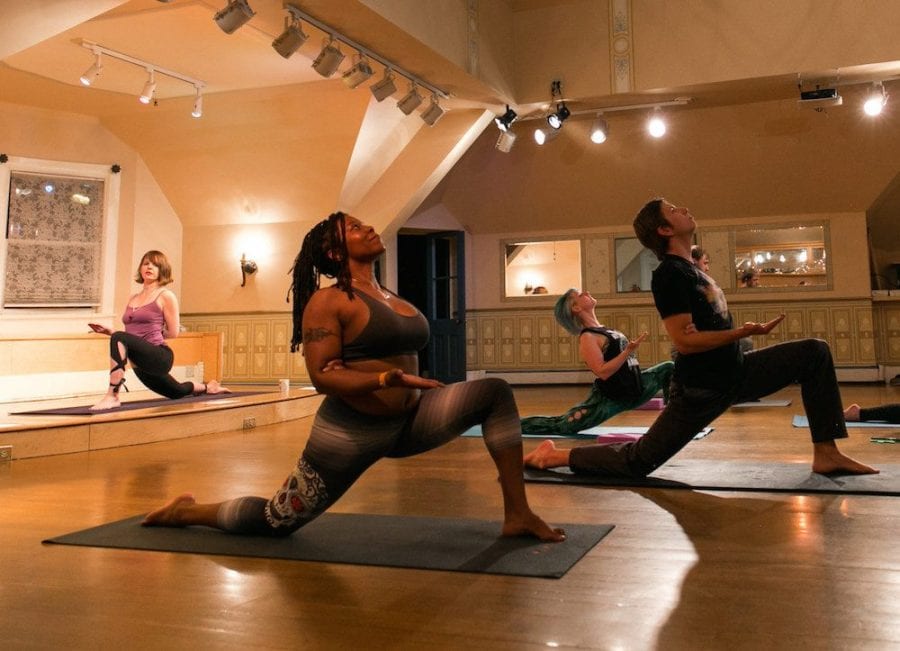 Try Ganja Yoga Near You!

As social consumption becomes the new focus of cannabis legislation, we may one day see yoga studios where any adult can walk in and light up before a class. We may also see more sporty and exercise endeavors embrace cannabis, like weed-friendly gyms and cannabis climbing groups.