Often ridiculed in society, the germaphobe has tendencies that border on obsessive-compulsive disorder. Their preoccupation with germs is often difficult for the masses to understand. Germs are everywhere after all, from door handles to money and from shopping carts to toilet seats. Despite the prevalence, most people emerge unscathed from their daily encounters with the microbial world.

Healthy humans have an effective immune system when it comes to dealing with such encounters. But, when those encounters come via the group consumption of cannabis from bongs, pipes, and vaporizers, evidence suggests that your germaphobe friend may well be on to something.

A report published by Moose Labs (2019) analyzed the amount of harmful bacteria on shared pipes during group consumption events. Researchers separated the one hundred participants into two groups of fifty. The researchers provided one group with silicone mouthpieces, but not the other group.

Using an ATP monitoring system, researchers swabbed the pipes from both groups at regular intervals. They found that on pipes where consumers did not take precautions, that bacteria levels were excessive, containing “almost one and a half times more bacteria than a public toilet seat.” The researchers claimed that it was “difficult to find a neutral object in daily life that was as contaminated as a cannabis pipe.”

The sharing of cannabis is a firm part of cannabis culture. The results then beg the question of what precautions consumers can take to prevent exposure to such high bacterial levels.

The recommendation of the researchers from Moose Labs was to use specially designed mouthpieces for bongs, joints, and vapes, which they claim can “decrease the spread and quantity of bacteria on a pipe.”

It is important to remember that Moose Labs sells the mouthpiece in question. While there is no extant research on methods for cleaning cannabis equipment, some methods in common use include: 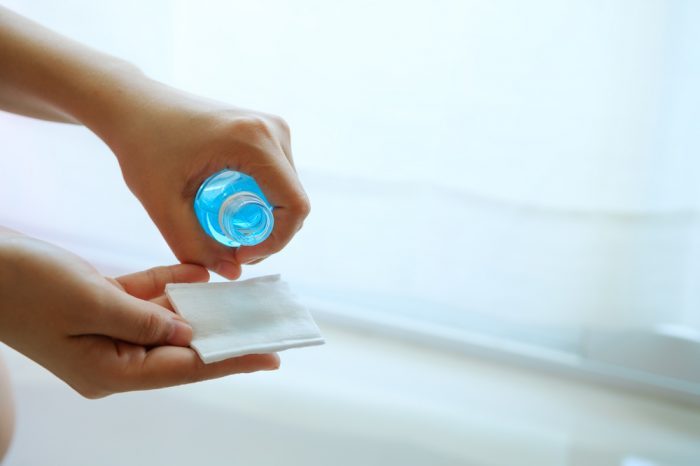 Thankfully, peer-reviewed research reinforces the benefits of cleaning glass with isopropyl alcohol. For example, this study from Anaesthesia (2007), found that cleaning ampoules with alcohol swabs drastically reduced the spread of bacteria. A similar technique would likely kill bacteria on bongs and other glassware.

This is all the more useful given that isopropyl alcohol is one of few substances which makes a solid dent in cleaning cannabis residue out of bongs and vaporizers. The germaphobe consumer then, ought to simply wipe down their mouthpiece in between sessions. If someone in a shared circle is sick, it could be beneficial to wipe down in between puffs, or have them use a separate piece altogether.

Bongs present yet more problems when it comes to contained exposure to excessive levels of bacteria. In addition to a shared mouthpiece, there’s also the issue of dirty bong water, and the collection of oils, mildew, and ash, on the interior of the glass.

The Dangers of Dirty Bong Water

Without changing bong water after each usage, a shiny film tends to develop on the surface. Known as biofilm, it consists of colonies of microbes that inhabit the surface of the water. When resin from the cannabis plant mixes with the water, it serves to allow the bacteria to proliferate further.

A study published in the open-access journal Respirology Case Reports (2017), investigated the link between bong use and pseudomonas lung infections. Pseudomonas is a type of bacteria that can cause lung infections, and the study revolved around the treatment of a 23-year-old male who exhibited such symptoms. Researchers postulated that the infection stemmed from a four-year-long daily bong habit.

Researchers were able to ascertain that the patient inhaled contaminated water from a bong. By comparing the cultures present in the patient’s sputum with those swabbed from the bong, researchers found a direct correlation and thus deemed the bong to be the source of the infection.

Researchers were adamant that consuming cannabis via a bong can result in a variety of lung disorders, including potentially life‐threatening lung infections. 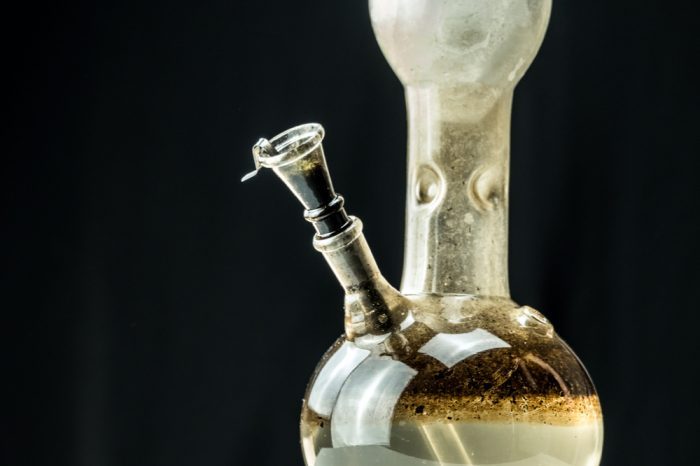 How to Clean a Bong

Those who wish to continue medicating with a bong should, at the very least, clean out their bong after each use.

The first step is to take the bong apart, and rinse everything in hot water. Next, place each piece in a container with rubbing alcohol and salt. Rubbing alcohol is slightly acidic and is very effective at removing any sticky resin that forms on the glass. The salt provides a clean abrasive, and also acts as a natural antibacterial. Allow the bong to sit in the solution for fifteen minutes, and continually disturb the solution throughout.

Once complete, rinse everything once again with hot water. A q-tip is often useful to remove stains that are especially common around the mouthpiece. The secret to keeping a bong clean is regular cleaning. Doing so infrequently results in greater difficulty in cleaning and greater exposure to harmful bacteria with continued use.

With a legacy culture dating back decades, cannabis culture still revolves around sharing and caring for others. To light a joint and not offer to share it with company is unthinkable to many. There’s an etiquette underpinning the culture after all, and to ignore it is sacrosanct for many.

While the science seems solid, whether it convinces the masses to change their ways is another question. With a new generation of cannabis consumers coming online, less and less partake in consumption methods involving combustion. Consuming through electronic devices is more prevalent than ever.

Furthermore, the ever more popular tinctures and edibles provide yet another alternative for those concerned about exposure to potentially harmful bacteria. Perhaps in these times of potential epidemics related to the coronavirus, germaphobe or no, it may be prudent to think twice before hitting a filthy bong.