Sometimes it’s not so much what’s being grown, but rather the disruption caused by greenhouse light pollution.

There’s an old saying that states one person’s medicine is another’s poison. And while the demand for cannabis as medicine may well be growing, the residents and wildlife who live and roam near large-scale cannabis greenhouse light pollution may beg to differ.

Residents around new cannabis facilities complain bitterly of the light pollution they put out. Much of the controversy occurs in Canada, where cannabis is legal federally and widely grown. Companies like Canopy Growth with large production facilities up to 30 acres have run into trouble with local residents in British Columbia. According to local residents, the greenhouse light pollution is so strong that it never truly gets dark – no matter the hour. 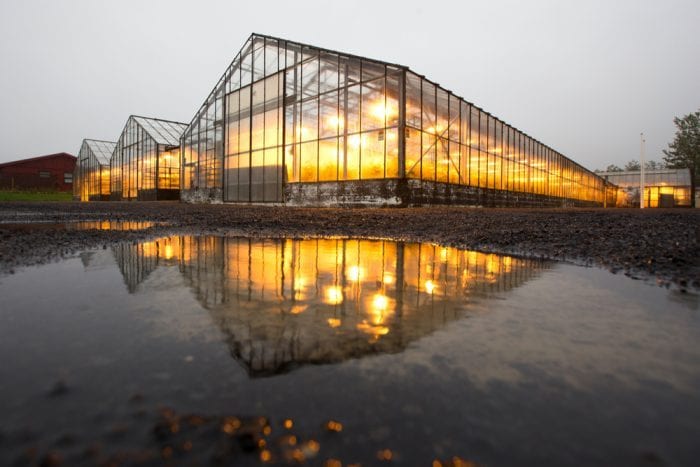 Why is Light Pollution Growing?

Why is greenhouse light pollution growing? Greenhouses have been around for decades. But, it has never before been legal to grow cannabis, a crop which relies on a very peculiar “photoperiod” for its development.

As a photoperiod plant, cannabis requires a strict light-dark cycle in order to switch from the vegetative stage to the flowering stage. Depending on the stage of growth, cannabis may require up to eighteen hours of light per twenty-four-hour period. Most other plants have less stringent requirements, with twelve hours of light often being sufficient.

Eighteen hours of natural sunlight is impossible in all but the most extreme latitudes. In the more moderate latitudes, where much cannabis cultivation occurs, growers give the plants supplemental lighting. But here’s the catch – this extra light wreaks havoc on human and non-human residents, and leaves the local wildlife confused and disorientated.

Light pollution has serious ecological consequences. Studies suggest that it has adverse health effects on human and non-human animals.

So Why is Light Pollution a Big Deal?

Every lifeform on earth is the product of many hundreds of millions of years of evolution. Accordingly, one variable that’s hardwired into our collective biology is the strict day-night cycle that helps form our circadian rhythms.

Plants, and animals both have delicate circadian rhythms, that modulate on the consistent cycles of light and darkness. Aside from sleep disruption in humans and its myriad of downstream consequences, animals—without the luxury of blackout curtains—suffer to a much greater degree.

The Consequences of Light Pollution

Prey animals like owls, foxes, hedgehogs, and bats all require the cover of darkness to hunt efficiently. Without it, population balance correspondingly drifts out of whack as animals become incapable of hunting effectively.

One of the most affected species due to the presence of artificial light is birds. The Fatal Light Awareness Program (FLAP) in Toronto, Canada, is an association dedicated to raising awareness of dwindling numbers. They estimate that up to nine million birds die in the city each year. These deaths are primarily as a result of light pollution – though windows also claim their fair share of bird lives.

Birds that migrate or hunt at night navigate by moonlight and starlight. Therefore, the presence of artificial light can cause them to veer off course into towns and cities. As a result, many migrate too early or too late, and often miss the ideal times for nesting and foraging, straining numbers.

A study published in Nature (2018) investigated how artificial light at night (ALAN) influences the biology and ecology of birds. Researchers studied 298 species of migrating birds and noted that the effects of light pollution on them results in “disorientation, alterations in reproductive physiology, disruption of circadian rhythms, and changes of flight behavior.[1]Cabrera-Cruz, S.A., Smolinsky, J.A. & Buler, J.J. Light pollution is greatest within migration passage areas for nocturnally-migrating birds around the world. Sci Rep 8, 3261 (2018). … Continue reading

Many migrating birds cross large expanses of land two times every year, and researchers note that much of the light pollution lies on migration passages.

Light Pollution and the Insect Apocalypse

Insects are essential prey for countless species. Light pollution favors the predators by trapping insects in orbit around artificial light sources. In many cases, they mistake an artificial light source for the moon. As a result, scientists estimate that one-third die by morning, by becoming prey, or through complete exhaustion.

RELATED  It's Always High Season at These Cannabis Friendly Destinations

Declining insect populations have a knock-on effect that impacts many species reliant on insects for food or pollination.

A study published in Biological Conservation (2019) investigated the drivers behind the worldwide decline of the entomofauna (insects) and made some alarming predictions. Researchers claimed that over 40% of insect species are threatened with extinction. They attribute much of the threat to the “intensification of agriculture.”[2]Sánchez-Bayo, Francisco & Wyckhuys, Kris. (2019). Worldwide decline of the entomofauna: A review of its drivers. Biological Conservation. 232. 10.1016/j.biocon.2019.01.020.

Their conclusion is clear. They argue that “unless we change our ways of producing food, insects as a whole will go down the path of extinction in a few decades.” 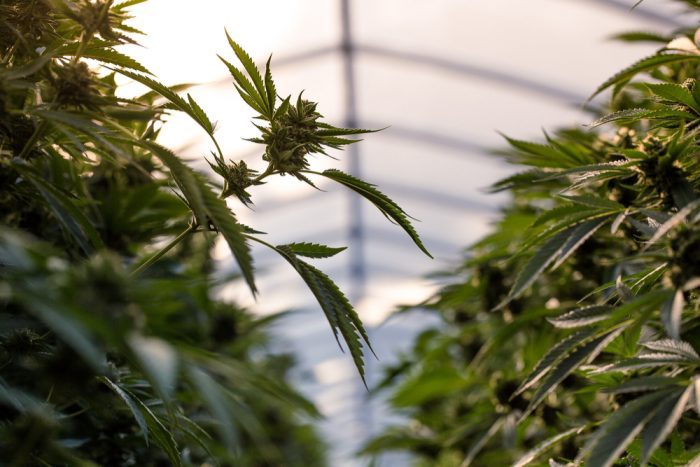 What Can We Do About Greenhouse Light Pollution?

Thankfully, companies like Canopy Growth felt a backlash from local British Columbian residents. They began looking for solutions that they hadn’t previously considered. Jordan Sinclair, vice-president of communications for the company, explained that “There’s always going to be a transition period. The producers themselves have to go through a period of making sure they’re good neighbors.”

In British Columbia, Canopy Growth attempted to reduce their greenhouse light pollution by installing shades on the sides of greenhouses. Further, the fact is that most places don’t yet have regulations around cannabis greenhouses. Current regulations pertain to outdoor lighting rather than that coming from inside the structures.

This is just one more way that federal laws and regulations need to shift for the new industry. After all, people cultivate cannabis with the idea of healing humanity. It would be ironic if it ultimately plays a helping hand in an impending ecological disaster.