Gum Disease Is More Common In Smokers – Even For Cannabis

Smokers of cannabis elevate their risk of gum disease. Yet when you use other methods of consumption, the risk lowers.

One study looked to see if recreational cannabis consumption could lead to any health problems. The longitudinal study included over 1000 participants and linked smoking cannabis to poor periodontal health. Researchers saw a decline in periodontal health from 26 years old onwards. Other health issues, including inflammation and metabolic health, showed no negative effects from long-term cannabis smoking. In fact, some of the health measures actually improved.

Periodontitis is also referred to as gum disease, and is actually one of the most common dental conditions. Periodontitis attacks the periodontal tissues of the mouth, like the gums and bone support of the teeth. It occurs when bacteria called plaque starts to build up on your teeth. It is first seen as gingivitis (inflammation of the gums) before it moves through to structures like the periodontal ligament and alveolar bone. Early symptoms include swollen gums, and serious cases can result in bone damage and tooth loss. Furthermore, severe periodontitis is a risk factor for heart and lung disease. 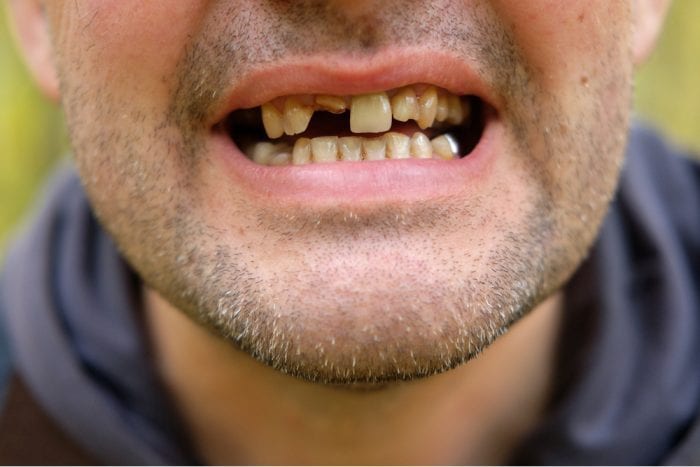 Other research seems to back up the link between smoking cannabis and gum disease. One literature review, with over 13,000 participants from separate studies, found that 19 percent of participants showed a connection between cannabis smoking and higher levels of periodontitis.

Another review found similar results, concluding that cannabis smokers had a 1.12 times greater chance of developing periodontal disease than those who abstain.

Another study found that “regular exposure to cannabis smoke was strongly associated with the prevalence and incidence of periodontal attachment loss by age 32.” The researchers controlled for tobacco use and other indicators of periodontal disease. They still found that cannabis is detrimental to periodontal health, and that reducing cannabis consumption might result in improved oral health.

How To Treat Periodontal Disease

A review of one woman who smoked cannabis regularly for a three-year period found that she had gingival inflammation, significant gingival enlargement (when your gums start to creep over your teeth), and severe chronic periodontitis in her mandibular anterior teeth.

The patient required both non-surgical and surgical treatment over a 6-month period to show improvement.

Tobacco And Cannabis Have A Similar Effect

Confusingly, there is also evidence that cannabinoids may actually improve the conditions that otherwise lead to periodontal disease. 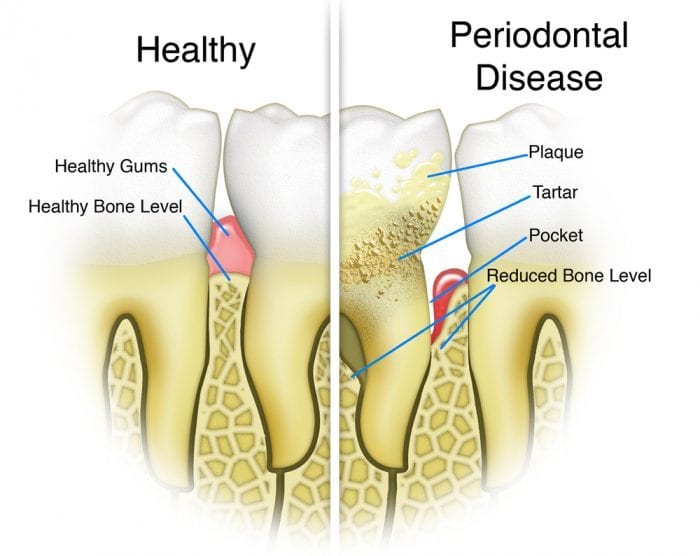 The cannabinoid receptor CB2 was also shown to induce “anti-inflammatory, osteoprotective, and pro-homeostatic effects” in the oral tissue of rats with periodontitis when activated with the HU-308 agonist.

Researchers have also demonstrated that the cannabinoid CBD reduces alveolar bone loss in rats with periodontal disease. Moreover, both CBD and THC have antibacterial properties, which is key to fighting the bacteria that can cause periodontitis.

So Is Cannabis Good Or Bad For Gum Health?

With contradictory evidence surrounding cannabis and oral health, it’s easy to misunderstand. However, one important distinction between the negative and positive research around cannabis and periodontal health is the delivery of cannabis. The prevalence of gum disease in smokers does not appear to apply to non-smoking cannabis patients.