The true story of Ford’s hemp car is better than its legend.

It’s a story soaked in tinctured lore. Even if some of the details of the story of Ford’s hemp car may have been exaggerated for effect, the true story is actually better than the legend. Passed from believer to non-believer in fits and starts; the kind of tale that you believe is true if you already support its underlying premise. The outline goes like this: Henry Ford spent years designing a car that not only ran on hemp fuel, but was made from hemp. He only stopped, the legend goes, because the plant was outlawed.

In the age of Elon Musk, that story may not sound ridiculous. But for years, people disputed that a respected Captain of Industry would ever consider hemp as a replacement for good ol’ American steel. But it’s turns out that there’s more truth than myth to the tale of Ford’s ingenuity.

The story steams from a Popular Mechanics article that dates from 1941, which recounts a Henry Ford showcasing his concept car. It’s part of an article on alternatives to metal which could help with the war effort. The piece is sparse on details, but notes the car is pressure molded cut plastic. The article further details how the car was made from cellulose fibers wheat straw, hemp, and sisal (a Mexican agave plant). The company’s plan was to show off prototypes of the hemp car in 1943. Obviously, that didn’t happen. Worse, Popular Mechanics never followed up with the story behind the death of the hemp car.

But a 1941 New York Times article picked up the slack, quoting Robert Boyer, Ford’s longtime assistant, about the possibilities of a plastic car made partially out of hemp. “Mr. Ford has a well-considered program and proposes to see where it will lead,” the article states, teasing out ideas about Ford’s ability to actually implement the project by buying large plastic-molding presses and acres of land.

Why plastic? It’s nice to think that Ford’s work was for the war effort. However, it may not be all that realistic. Plastic, he thought, could be a cheaper alternative to steel — and it would merge American-grown agriculture with American industry. It might also be safer. Another article from the ’41 New York Times details the unveiling of the hemp car, and the 78-year-old Ford taking a sledgehammer to its exterior, producing no dent. He tries the same to a run-of-the-mill steel model and — Wham! — the old man’s wallop leaves a visible crater.

RELATED  The Benefits of Wearing a Hemp Mask During a Pandemic 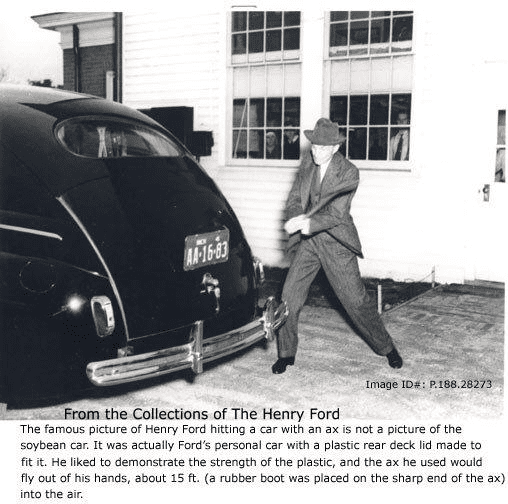 Why a Car Made of Hemp?

The attractiveness of hemp (cannabis sativa) is that it’s resilient, strong, and flexible. It’s hardy enough to grow in infertile soils, freeing up good cropland for other stock, and reaches maturity fast enough to be sustainable.

Ford’s hemp dream was about disrupting the industry yet again — and in multiple ways. He proved you could make a car partially from hemp, but his dream went even further; the industrialist saw a future in hemp fuel replacing gasoline. 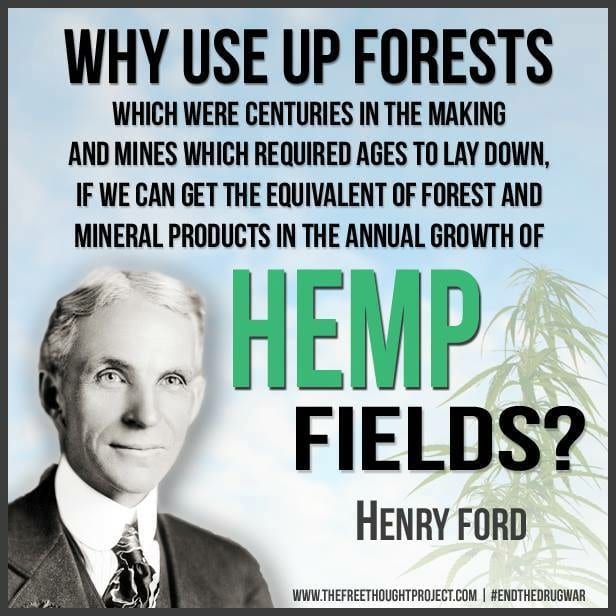 It’s hard to trace what hard science led to Ford’s speculation. However, today’s scientists are finally testing his mid-century hypothesis. In 2010, researchers at the University of Connecticut found that hemp is viable, renewable source of fuel in two different ways.

First, hemp seeds are nature’s batteries. What Ford likely had in mind was channeling hemp seed oil into a different form, something more akin to biodiesel. Hemp, the UConn scientists found, is also great as a biodiesel component. Hemp works perfectly because it has highly efficient “conversion rating.” This means that when you process hemp seed oil into fuel, most of the energy stays in the fuel. In hemp’s case, 97 percent of the energy is transferable through the process.

So why didn’t the car ever make it to market? Well, for one thing, the government outlawed it in 1937 — before Ford completed a prototype, but well after he’d undertaken the project. That part of the legend is true. But it’s not the only reason. Another is demand. Thanks to a few shady government deals, the price of gasoline in America was outrageously low at the time. There wasn’t a need to look elsewhere or invest in disruption technology when so much money was coming in.

The End of an Era

And finally? Ford was old. He died at age 83 in 1947. He’d endured a series of strokes that left him unhealthy. He didn’t have the energy or the esteem to push through another disruption.

But who knows? Once Musk gets back from Mars, he might want to take up a more Earth-bound matter, and implement Ford’s forgotten hemp car.