New research has found the changes in the brain that cause high tolerance in cannabis consumers.

Newly published research shines a light on the biological mechanisms responsible for the development of a high tolerance among frequent cannabis consumers.

Cannabinoids, and specifically THC, produce psychoactive effects when they bind to CB1 receptors located in the brain. CB1 activation causes inhibition of neurons, and communication between nerves generally slows down. When an individual is frequently consuming large amounts of cannabis, the endocannabinoid system attempts to restore homeostasis and bring balance back to the system. To achieve this effect, the body takes steps to limit the effect of THC. The brain desensitizes and weakens CB1 receptors, affecting THC binding and reducing the intensity of the ‘high’. To achieve the same effect, an individual will need to flood the brain with greater amounts of THC. Recent research out of Maastricht University has further expanded the scientific understanding of cannabis tolerance. The researchers identified a link between high tolerance and certain neuro-metabolic alternations in the brain’s reward circuitry. 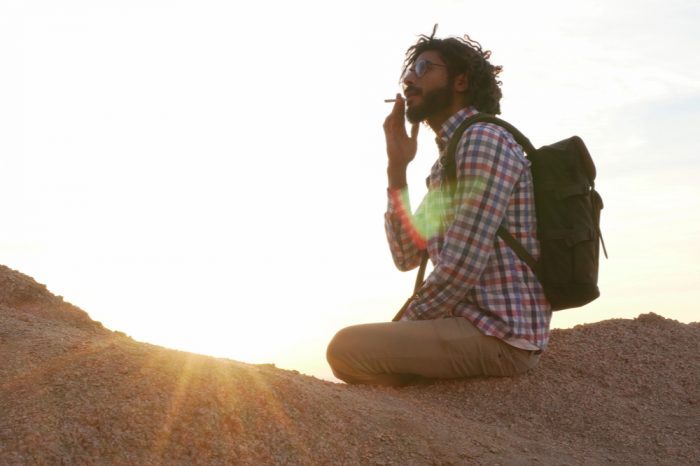 For the purpose of this study, occasional consumers reported consuming cannabis from once a month to three times a week. Conversely, frequent consumers reported consuming cannabis at least four times a week. The researchers gave each group three hundred micrograms of THC per kilogram of body weight, or a placebo.  Then, they monitored brain activity via functional magnetic resonance imaging (fMRI) and magnetic resonance spectroscopy.

RELATED  Risk Of Pregnancy Loss May Increase For Cannabis Consumers

Ocasional consumers displayed significant neuro-metabolic alterations in reward circuitry. Comparitively, they showed a particular reduction in functional connectivity and an increase in striatal glutamate concentrations. These changes associate with increases in “feeling high” and decreases in performance on a sustained cognitive task. Interestingly, the same alterations were absent in frequent consumers, suggesting reduced responsiveness of the reward circuitry.

The lead researcher on the project, Natasha L. Mason, said that “knowledge on frequency, dose, and duration of cannabis use that is needed to achieve, maintain or lessen tolerance, however, is very limited, but will be of importance in the context of cannabis therapeutics and in legal settings when evaluating the impact of cannabis exposure on human function.” In other words, scientists don’t yet fully know how much cannabis constitutes a tolerance. Further, Mason beleives knowing that fact will be crucially important for doctors and lawmakers in the future.

Overall, the research demonstrates that individuals can lower their cannabis tolerance by abstaining from cannabis for anywhere from a few days to a few weeks. Some have referred to this as a ‘T-break.’ Know that at this time, there isn’t any solid data on the optimal length of time. Instead, this is most likely based on individual factors.

The team used a technique known as positron emission tomography. Then, the researchers looked at the participant’s brains immediately before four weeks of continuously monitored abstinence. They also looked immediately after. Following the four weeks, CB1 receptor density generally returned to normal levels. Perhaps unsurprisingly, downregulation correlated with years of cannabis consumption. This research underscores that high cannabis tolerance is reversible by abstaining for a length of time. This is good news for recreational consumers who are hoping to restore their cannabis tolerance to lower levels. However, not all cannabis consumers can take a break. Some medical cannabis patients rely on cannabis to treat chronic conditions every day.

Medical Patients Might not be able to Take a Tolerance Break

Significantly, as of September 2019, there were almost 370,000 medical client registrations with federally licensed producers in Canada. Further, an additional 29,000 individuals were on register for personal cultivation. Thousands more likely consume cannabis for medical purposes without officially registering with a licensed producer.

For many of these people, cannabis abstinence might not be an option. However, a diminishing cannabis effect leading to higher doses can also be problematic. For these reasons, researchers need to further expand upon the work conducted at Maastricht University.

Researchers Looking Into How CBD May Restore Gut Health