Statistically speaking, illicit drug use is common in HIV populations. This is particularly detrimental to providing effective care. Research has shown that illicit drug use is associated with decreased initiation of antiviral therapy and increased mortality. Morphine, for example, has been found to promote the replication of HIV-1 virus in human cultured cells extracted from the blood. Additionally, the higher the dose of morphine, the more HIV-1 replication.

Also, in a preclinical model of infection with a retrovirus (the same class of viruses to which HIV belongs), sustained cocaine use resulted in reduced immune functioning. Does cannabis, a non-illicit medicine in a growing number of countries across the world, have any of the same concerns?

People living with HIV/AIDS reportedly use cannabis to alleviate the side-effects of anti-retroviral therapy, including fever, nausea, and vomiting. However, the potential for cannabis to improve HIV disease parameters is growing. This research originated from the previously published pre-clinical studies showing immunomodulatory, anti-emetic and anti-inflammatory effects of cannabinoids.

One particular study, published in AIDS Research and Human Retroviruses (2011), showed that administration of THC to monkeys carrying a simian immunodeficiency virus infection reduced plasma viral loads, which increased life span. In other words, THC signaling appears to have halted the multiplication of the virus. This then curbed the infection and improved accompanying symptoms.

HIV wasting syndrome is when a person experiences significant unwanted weight loss coupled with either diarrhea, weakness and fever for at least a month. While support for cannabis as a treatment for HIV wasting is strong, research is yet to catch up. Ultimately, anti-cannabis laws are stifling robust scientific investigation. However, certain studies do support the use of Marinol which is synthetic cannabinoids.

This 2016 study, published in HIV/AIDS, concluded that Marinol stimulated appetite and stabilized weight in people with advanced HIV wasting while affording an average gain of one percent in lean muscle mass.

While there isn’t much research on the efficacy of smoked cannabis in achieving the same results. Many people still tend to prefer smoking cannabis for its perceived benefits, from how quickly it eases pain and relieves stress. Today, most approaches to therapy usually include a combination of appetite stimulants (like cannabis) and anabolic drugs (testosterone and human growth hormone) to treat chronic wasting.

Researchers from Vancouver discovered this effect of THC. The discovery led them to ask: is this observable in humans living with HIV? Can medical cannabis consumption reduce the plasma viral loads in those with HIV? This would translate to a significant reduction in their morbidity and mortality.

Researchers found — while conducting a study published Drug and alcohol Review (2015) — that daily cannabis consumption reduced plasma viral load significantly, compared to people who consumed cannabis at a lower frequency. Cannabinoids can modulate viral replication via indirect or direct effects. Namely, cannabinoids can bind to their receptors and exert immunomodulatory and anti-inflammatory effects.

Administration of a cannabinoid receptor agonist provides evidence showing the direct antiviral effect of cannabinoids. Researchers found that it significantly suppresses replication of the HIV virus in microglia. Micrologia is a major nervous system cell type which HIV often infects. 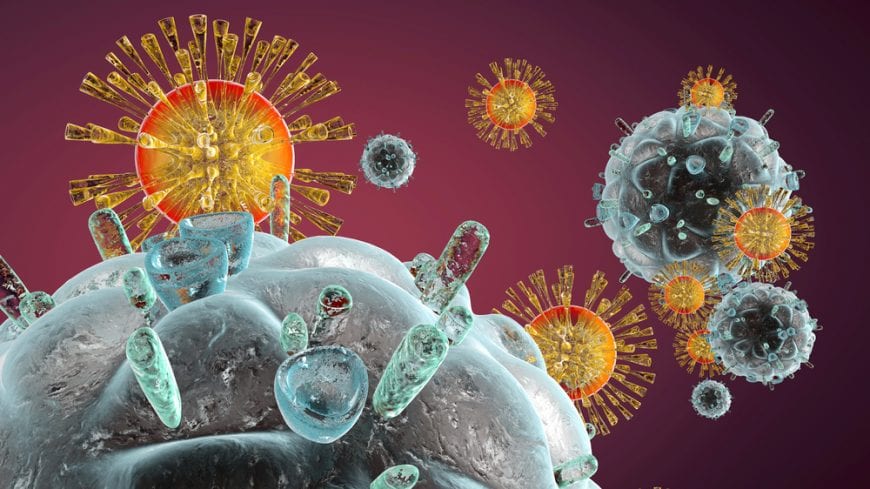 A New Frontier for Exploration

Doctors are yet to describe the full spectrum of virological and immunological effects of cannabis for people living with HIV/AIDS. However, current research identifies a starting point and some evidence of anti-viral therapeutic potential is promising.

The scientific community has some concerns about whether cannabis use would compromise adherence to anti-retroviral therapy in people living with this condition, which is imperative for reducing morbidity and mortality. However, it has been shown recently that daily cannabis consumption did not negatively affect adherence to anti-retroviral therapy. So far, the evidence points to the potential benefits of combination therapy for people living with HIV/AIDS. This would consist of anti-retroviral medication and daily cannabis use.