Do you think there will be a time we can control terpene content by modifying enzyme genes or growing conditions?

According to the published literature, at least five hundred and forty-four compounds exist in the cannabis plant. Among these are one hundred and thirteen phytocannabinoids and one hundred and twenty terpenes. Different enzymes control terpene content and the cannabinoid concentration of the plant. And this determines the overall medicinal benefits of a particular strain (chemovar).

Where do Cannabinoids and Terpenes Come From?

There is a specific sequence of chemical changes that control the synthesis of each compound. Cannabigerolic acid (CBGa) is the first cannabinoid in the biosynthetic pathways for cannabinoids. It undergoes a series of conversions to create THCa, CBDa, and CBCa. And this is controlled by enzymes.

Terpenes, the molecules responsible for the plant’s aroma, exist because of a chemical reaction called an ‘addition reaction’. This reaction generates either monoterpenes or sesquiterpenes. These molecules differ in their chemical structure in that sesquiterpenes are about fifty percent larger than monoterpenes.

Whether or not the terpene content varies from cannabis strain to cannabis strain was a bit of a mystery until a thorough chemical analysis from the Journal of Natural Products (2016). Science has now uncovered five different chemotypes for the cannabis plant.

Chemotypes Depend on Cannabinoid Concentration

Depending on the ratios of concentrations of major cannabinoids, cannabis has five different chemotype categories:

In addition, the chemical analysis published in the Journal of Natural Products (2016), revealed how the concentrations of THCa and CBDa vary through the different stages of plant maturation. It seems that the time of maximal THCa versus maximal CBDa (in the flower) occur at different times, dependent on the chemotype. For example, in chemotype I, peak concentrations of THCa occurs in week nine. However, in chemotypes II and III these concentrations continued to increase throughout the experiment that concluded on week eleven in the flowering phase.

RELATED  Researchers Ask: Can Just the "Smell" of Cannabis Heal? 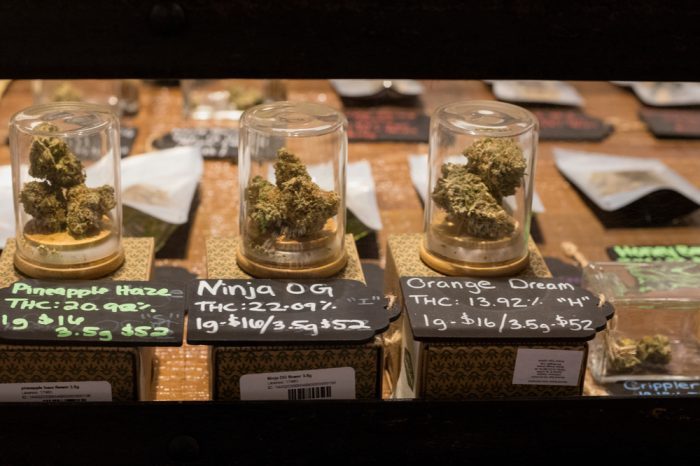 Similar patterns of unique distribution of monoterpenes and sesquiterpenes were present in the plant in this experiment. Similar to THCa and CBDs, monoterpenes, in leaves, decreased in the first weeks of the vegetative phase. This decline continued into the first few weeks of the flowering phase. Following this, a sharp and sustained increase in terpene content was seen in in chemotypes I, II, and III.

Monoterpenes seem to follow the pattern of peak concentration as cannabinoids, at least for chemotypes I-III. This may explain some interactions between terpenes and cannabinoids.

On the other hand, concentrations of sesquiterpenes (in the leaves) remained stable throughout the vegetative and flowering phases. This was found to be true of all chemotypes.

All terpenes come from two parent molecules: isopentenyl diphosphate (IPP) and dimethylallyl diphosphate (DMAPP). Consider these like lego blocks that must be arranged in a certain way to create different terpenes. For example, one molecule of DMAPP and two molecules of IPP eventually give rise to sesquiterpenes. While one molecule of each DMAPP and IPP create combinations that result in monoterpenes. These different combinations become possible through actions of specialized enzymes called terpene synthases. The reason plants have differing terpene contents is a direct result of how and where the plant produces these terpene synthases.

Different plant tissues produce the enzymes in different quantities and this can further vary depending on the stage of plant development. For example, during flowering phase, leaves express monoterpene synthases more when compared to sesquiterpene synthases. As a result, the concentration of monoterpenes is higher in the leaves during this phase.

What is Terpene DNA?

Just like humans, plants have DNA that contains genes to encode all information necessary for plant life. Thus the genes encoding terpene synthases dictate where, when and how much production of the mono- versus sesquiterpenes occurs in any given plant. Scientists still don’t completely understand this sophisticated and elegant method of gene expression. It is tempting to dream of ways to manipulate plant enzyme genes to boost terpene content. More research is needed to make this possible.