A touch of of intense spice can stop the vomiting of cannabinoid hyperemesis syndrome.

In the past year, the public learned about a mysterious illness purportedly caused by cannabis consumption. The illness, known since 2004 as cannabinoid hyperemesis syndrome (CHS), causes unbearable nausea, sharp abdominal pains, and fits of vomiting. The only known cure is abstaining from cannabis, a sad state for the average toker, but a potentially life-threatening option for patients with otherwise untreatable seizure disorders.

The catch is that cannabis hyperemesis syndrome itself can be life-threatening. Chronic, uncontrollable vomiting can cause severe malnourishment, dehydration, and ultimately renal failure. If the kidneys shut down, there’s little recourse for recovery outside of invasive medical procedures, or worse, a kidney transplant.

Capsaicin is a Hot Molecule That Stops Vomiting

Luckily, medical doctors may have found a simple and effective short-term treatment for CHS. It’s called capsaicin, a molecule found in chili peppers. Capsaicin gives chilis their heat; when extracted and concentrated, it can be packed into a handheld aerosol bottle most folks know as pepper spray.

Capsaicin creams, gels, and ointments have been around for a long time. They’re often prescribed to topically treat arthritic conditions, though many capsaicin medications can be purchased over-the-counter.

How does this potent pepper molecule treat CHS? And what clues does it give us into the causes behind this syndrome? 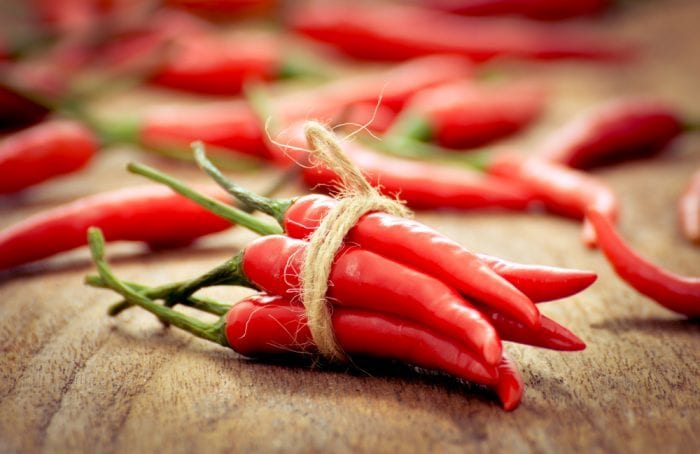 Cannabinoids, like THC and CBD, interact with other receptors besides the famous CB1 and CB2 varieties. TRPV1 (pronounced “trip vee one”) regulates our body’s temperature and gastrointestinal tract. Furthermore, TRPV1 resides within the central nervous system, with notable density in the chemoreceptor trigger zone (CTZ).

The CTZ may hold the key to the entire CHS mystery. Located in the medulla oblongata, the CTZ acts as the brain’s receiving dock for drugs and hormones. It also mediates signaling to another portion of the medulla – the area postrema – the brain structure that controls vomiting.

Think of the area postrema as a waiting room between the outside world and a doctor’s office. In order for most drugs to have any effect on the nervous system, they need to pass through the blood-brain barrier, a shield that protects the sensitive brain from being exposed to random chemicals in the blood. If the area postrema is destroyed (for example, by lasers, because that’s a thing), the body won’t vomit when given emetic drugs like opioids, which commonly cause nausea and vomiting.

The Vomiting Problem is All in the Trip Receptor

So here’s the TRPV1 hypothesis. When someone becomes a heavy, chronic cannabis consumer, they saturate their TRPV1 receptors with phytocannabinoids like THC, CBD, CBN, etc. TRPV1 receptors, in certain susceptible individuals, can’t handle the constant cannabinoid bombardment. In response, the receptors become desensitized or deactivated, where they refuse to initiate their natural chemical signals. Without proper stimulation from the TRPV1 receptors, the area postrema goes haywire, kicking off a wave of episodes of cannabinoid hyperemesis syndrome.

This model may explain why hot showers bring temporary yet instant relief to CHS patients. The heat from the water properly reactivates the TRPV1 receptors, modulating neurotransmitters like serotonin and somatostatin. Both serotonin and somatostatin regulate our body’s feelings of hunger. Serotonin accelerates digestion; somatostatin slows digestion down. In other words, TRPV1 activation keeps the gastrointestinal tract running smoothly. TRPV1 deactivation via cannabinoids would, presumably, achieve the exact opposite.

What Do Hot Showers Have to Do with Capsaicin? 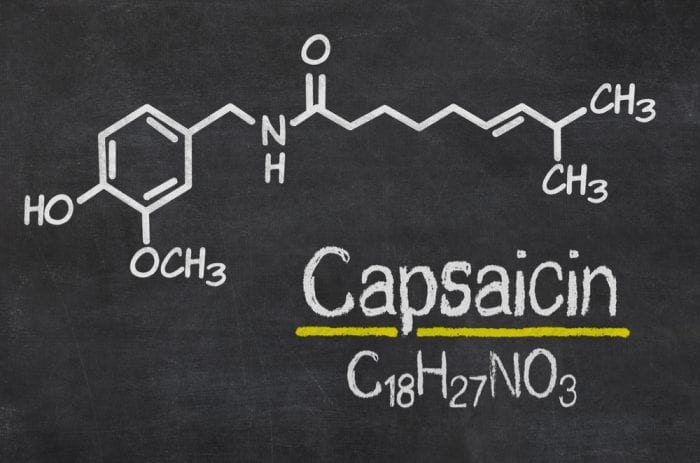 One 2018 case study in the American College of Gastroenterology Case Reports Journal reported that a 47-year-old patient came into a clinic for severe nausea and vomiting. The patient had been a heavy cannabis user for ten years. Doctors tried every anti-nausea and anti-emetic drug on the books, but nothing seemed to work.[1]Moon, A. M., Buckley, S. A., & Mark, N. M. (2018). Successful Treatment of Cannabinoid Hyperemesis Syndrome with Topical Capsaicin. ACG case reports journal, 5, e3. … Continue reading

Here’s the craziest part about this case study: the patient kept using cannabis even after the doctors told him to stop. He returned to the emergency room for hyperemesis. This time around, the doctors prescribed him capsaicin cream to rub on his belly. Within a few hours, the nausea and vomiting subsided, though the cream burned on his skin. A couple of hours after that, all feelings of nausea disappeared. Additional doses took care of his abdominal pain, and he never returned to the clinic for hyperemesis.

A Capsaicin Cream Though?

That capsaicin cream worked on this individual’s CHS even as he consumed cannabis lends weight to the TRPV1 deactivation hypothesis. If cannabinoid saturation across susceptible TRPV1 receptors causes the receptors to deactivate, initiating nausea and vomiting, then the sensation of heat on the skin could reactivate the receptors and override any harmful signals caused by the cannabinoids.

RELATED  Flavonoids: That Thing You Didn't Know About Cannabis

Capsaicin essentially works like a hot shower, except a patient can go about their day with it on the skin, and they’ll likely save on their water bills, to boot. However, doctors can’t create medical regimens based on a single dude’s response to capsaicin. All of this, for now, exists in the limbo of suspicion and conjecture. We still need to do more research.

If you or someone you know may have cannabis hyperemesis syndrome, get them to a doctor ASAP. Then invest in some capsaicin cream; it can’t hurt, even if it stings a little… or a lot.