How to Inhale Using Bongs, Vape, And Joints

Inhaling is a technique that you perfect over time to get better efficiency from your cannabis.

Tobacco misuse has poisoned more than the millions of addicted smokers. It has also poisoned the minds of the masses, who view inhaling the smoke of any plant matter to be extremely unhealthy. While no one can make the case that smoking is entirely healthy as incomplete combustion will always create unwanted products like carbon monoxide and carbon. But, cannabis isn’t tobacco. And when it comes to inhaling medicinal cannabis to manage nausea or chronic pain, smoking or vaping has been found to be an effective way to get rapid relief.

A 2017 study uncovered that those suffering from chronic pain obtained better relief by smoking and vaping cannabis over oral administration. Their findings suggested that oral ingestion of cannabis resulted in, “less active substances reaching their receptors.” Only fourteen percent of the 984 participants found that edibles provided them better relief over smoking or vaping.

Similarly, a 2018 study published in Drug, Healthcare and Patient Safety, showed that smoking and vaping gave medical cannabis, “patients the capacity to titrate their dose through adaptive smoking behavior” over oral methods of administration.

So, if you’re new to medicinal cannabis and overwhelmed by the options, here’s how to medicate by smoking or vaping.

Whether tabletop, portable, or oil vapes, there are many types of vaporizers on the market today. When vaping, the flower or oil is heated to a temperature that vaporizes the cannabinoids and terpenes to just below their burning point. By not burning the plant matter, it results in reduced exposure to carcinogens.

However, when vaping, terpenes can irritate the back of the throat of inexperienced consumers. To avoid coughing fits, vape slowly and sip water in between. Many find that mixing a little honey with the water helps alleviate the effects of the pungent terpene flavor.

You can vape via ‘mouth to lung’ inhale or a ‘straight lung’ inhale. With the latter, many people report diminished flavor, and this is the preferred method if vaping flower. Most patients prefer a mouth to lung inhale for oils. Just make sure that you take a nice deep breath during the inhale.

How long should you hold the vapor in for? Momentarily will do, but five seconds is the maximum most patients recommend. Many people accustomed to smoking cigarettes pull hard for that throat thump and associated nicotine buzz. Vaping cannabis doesn’t have to be like that. It’s not a mechanism to deal with nicotine addiction, it’s medicine. Do so slowly and mindfully. It’s like taking sips from a hot drink.

Inhaling Cannabis Smoke from a Bong

If you’re inhaling from a bong, be prepared to cough. There are two ways to hit a bong. One involves the snap method, where you pack the bowl with just enough flower to clear in one hit. The other involves packing more cannabis than you can clear in one go, where you relight the bowl several times.

To begin, finely grind up your cannabis, and pack it into the bowl. Don’t pack it too tightly as it may clog the bowl. With both, the process of inhaling the smoke is identical.

With a glass of water by your side, proceed to suck gently as you light the flower. Watch for the smoke rising up through the neck. As it approaches the top, remove the bowl, or lift your finger from the carb if you have one, before inhaling the smoke. A lot of smoke can accumulate in the neck. Don’t feel the need to inhale it all initially. Those not used to inhaling such quantities can expect to cough profusely afterwards. Cue the glass of water.

For those who experience severe irritation after inhaling, several ice cubes in the neck of the bong can help cool the smoke further for a more pleasant smoking experience. 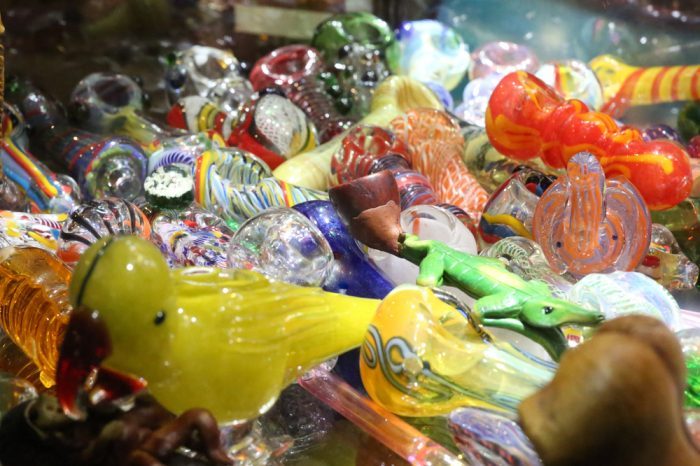 The advantage of a snap is that you clear the bowl in one go. This means that you don’t have to relight already burnt flower or ash. After a couple of hits, relighting can lead to a noticeable decrease in flavor. With snaps, it’s best to start slow and work your way up. Small quantities will help avoid incessant coughing.

Taking a Toke from a Joint

As the most common method of smoking cannabis, joints are the easiest method for beginners to use. To medicate with a joint, bring the smoke into your mouth and allow it to sit there for a second to let it cool further before inhaling.

Some people think that holding the smoke in your lungs longer results in a more potent effect. This is known as ghosting and there’s no truth behind it. Four to five seconds is more than enough. The evidence suggests that those who hold it for longer only end up coughing more.

Cannabis smoke can be harsh, so don’t be surprised if you cough. As with other methods of administration, inhaling smaller amounts of cannabis will help ease throat irritation.

Smoking a joint is not like smoking a cigarette. The point of it isn’t to make it the whole way through. Think of it as an experience as opposed to a necessity. You wouldn’t play a soothing piece of music at double speed to get through it faster. So why would you do the same with a joint? As with music, glide with grace through the experience. By doing the same with cannabis, you bond with the medicine and begin to develop a relationship with it. Have a toke, lay it down, see how you feel. If you need more, smoke more.

We’re not feeding an addiction, but rather feeding the gateway into presence and a deeper connection with this sacred plant and your own healing.