Make Your Own Natural Pet Toys: The Hemp Rope Edition

Get rowdy and bond with your dog over a good game of tug-of-war.

Science is currently in the process of discovering all of the ways in which the Cannabis sativa plant can be useful medicinally. However, the hemp plant has already been a versatile crop for centuries, in a number of ways. Particularly in the textile industry. Hemp has actually been used to make clothes, paper and rope, long before it was ever made illegal in the United States. But thanks to the 2018 Farm Bill, this resourceful crop is proving its worth once again. And making natural hemp pet toys out of rope is just one of the ways it’s being utilized.

How to Make Your Own Natural Pet Toys Out of Hemp

The hemp plant provides a better alternative as a textile because of its all-natural quality. It can be substituted for bleached cotton, which can make it a healthier choice. This is particularly beneficial when making things like natural pet toys.

For instance, instead of making a fun and adorable dog toy out of bleached cotton rope, you can use hemp rope instead. That way, it’s safer for your dog, and it supports the sustainable hemp industry. Simply buy yourself some hemp rope instead of cotton or nylon, and you’re on your way to treating your dog’s need to pull with the love and care that it deserves.

Ready to make your pup a natural hemp pet toy? Simply follow these steps provided by Instructables. There are numerous patterns to suit your dog’s personal play style. By using hemp rope to make natural pet toys, you can rest assured that your pooch won’t be ingesting any harmful chemicals.

And if you want to go the extra mile and make your own hemp rope, you can find instructions here. 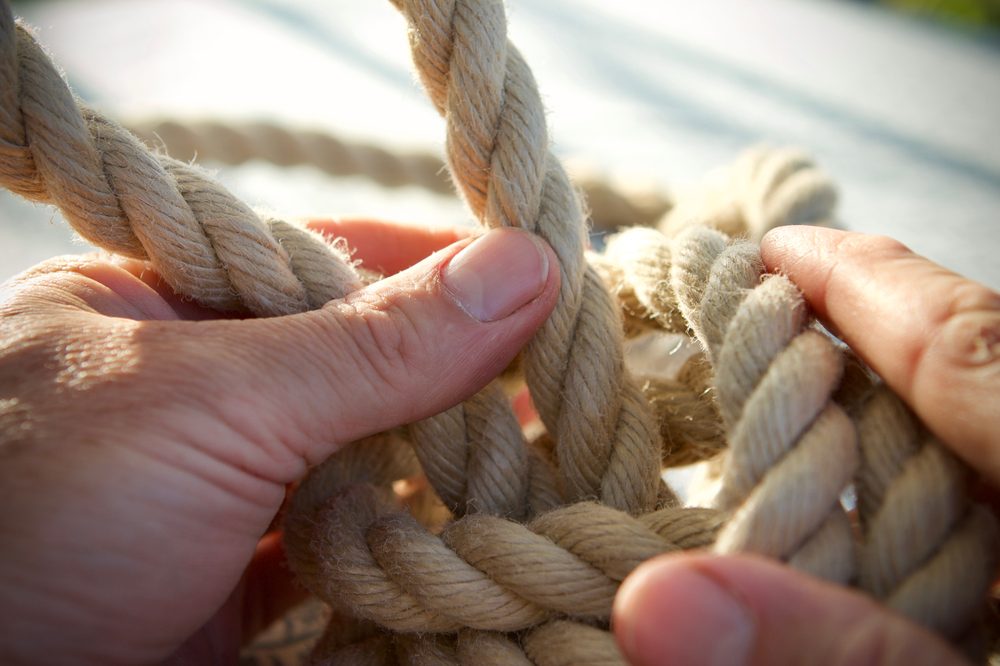 It’s no secret that dogs commonly love to sink their teeth into a tightly knotted rope toy. From chasing it down, to swinging it around, chewing on it and pulling on it, there is no shortage of fun to be had if you’re a dog and you’ve got some rope.

So, what’s the appeal? Why do dogs love this simple toy so much?

When your dog bites and shakes that rope toy, he or she is taking part in an instinctual predatory activity — without harming any animals. The actions are the same ones used to kill prey, or, according to the website K9 Of Mine, tearing off bits and pieces of a dead carcass. While this may sound morbid to you, it doesn’t to your dog. It’s just the kind of thing he or she would love to do. And while they’re giving that toy a good chew, they’re also cleaning their teeth.

But, the best part about the rope toy is the bond it creates between you and your dog. According to the American Kennel Club, a game of tug-of-war with a rope toy not only strengthens your bond, but it helps your pup build confidence and learn self-control, too.

Plus, as we all know, dogs love to chew things. So if your pet has been getting into your socks or wrecking the furniture, try giving them a hemp rope toy to chew on instead. It might just be the thing to save your couch

What if a Tug-Of-War Game Turns Aggressive?

There are some instances where the tried-and-true tug-of-war game just isn’t a good fit. If your dog has shown signs of heightened aggression in the past, or is a rescue that has been abused, there is a chance they might go a little overboard with this game.

In general, however, if you worry that a game of tug-of-war will teach your dog to be aggressive or dominant – don’t. This study in the Journal of Applied Animal Welfare Science (2003), found that playing tug-of-war does not determine whether or not a dog is aggressive [1]Rooney, Nicola J, and John W S Bradshaw. “Links between Play and Dominance and Attachment Dimensions of Dog-Human Relationships.” Journal of Applied Animal Welfare Science : JAAWS, U.S. National … Continue reading.

And according to this very thorough instructional guide about the science of dog behavior, there are some pervasive myths out there regarding dogs and dominance. Basically, it’s all about the relationship you have with your dog. A good owner needs to respond to their pooch’s needs. A game of tug-of-war can help you bind and create a natural pack-based relationship, but it isn’t change anything overnight [2]“The Dominance Controversy.” Dr. Sophia Yin, 21 Oct. 2016, drsophiayin.com/philosophy/dominance/.. These games are but one more tool in the repertoire of loving your doggo. 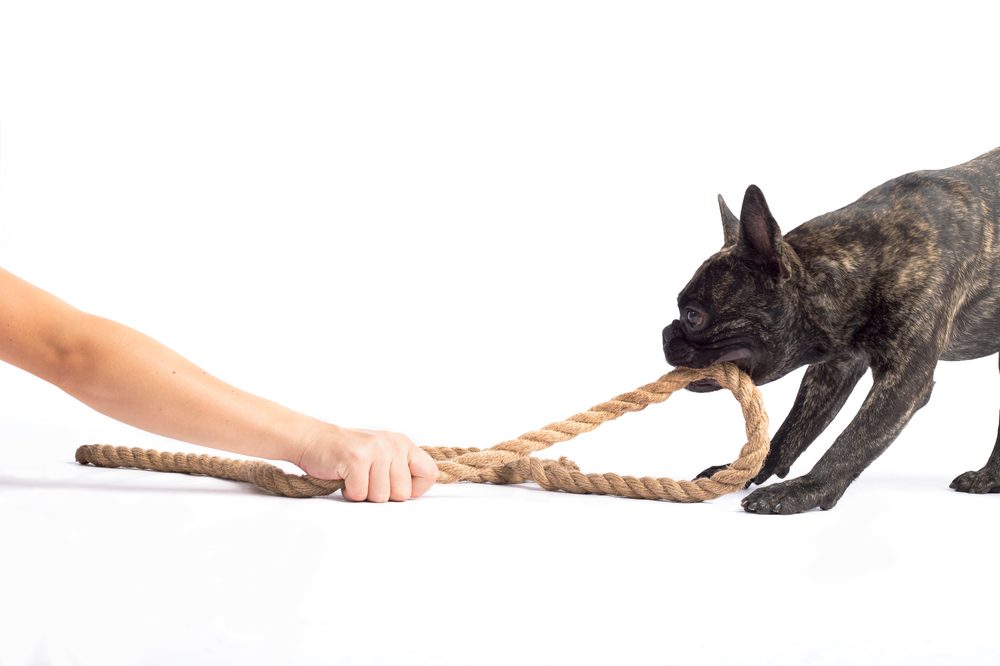 Playing tug-of-war with your dog will not cause them to become aggressive, but there are some steps you can take to keep the game friendly and good-natured. You can ensure that things don’t get too out-of-control by safeguarding with a few dog training steps.

Dog behavioral experts, like those at the American Kennel Club, advocate that you initiate the game, not your dog. And when things start to get a little too rough, end the game immediately. If your dog accidentally bites you, or shows signs of over-stimulation, that’s a good time to call it quits. The overall take-away here is that you control the game, not your dog.

Just remember that your pup might growl during this game. If their tail is wagging and their behavior seems friendly, that’s okay. A little growling is all in good fun. It’s also important to resist pulling very hard with your dog, to avoid damaging their teeth (especially if you have a puppy with baby teeth).

But above all, don’t hesitate to reward good behavior (like following commands) with treats. That way, you’ll help build your dog’s confidence and set the stage for friendly tug-of-war games in the future.