Research into how to prevent dementia shows THC may not only destroy amyloid plaques, but also prevent formation.

Neurotoxic plaques invade the brains of patients with Alzheimer’s Disease. These are made from fibrils of a protein called amyloid-beta peptides. Importantly, plaques appear to prevent proper nerve signalling and this disrupts memory and cognitive functioning. But THC may be able to stop these fibrils from growing, and may even break down fully formed plaques. Perhaps our quest into how to prevent dementia will soon include cannabinoid therapy.

At this time, there is no cure for Alzheimer’s and approved medications decline in efficacy after a certain stage. Available pharmaceuticals include galantamine, rivastigmine, and donepezil. These are cholinesterase inhibitors prescribed for mild to moderate Alzheimer’s symptoms.

Additionally, in June 2021, the FDA approved a pharmaceutical called Aducanumab. It is a type of immunotherapy that targets amyloid plaque deposits directly and may slow the progression of Alzheimer’s.

Even with all of these weapons in the arsenal, we still do not yet know how to prevent dementia. There is scientific speculation, however, that cannabis could be a future treatment for exactly this. 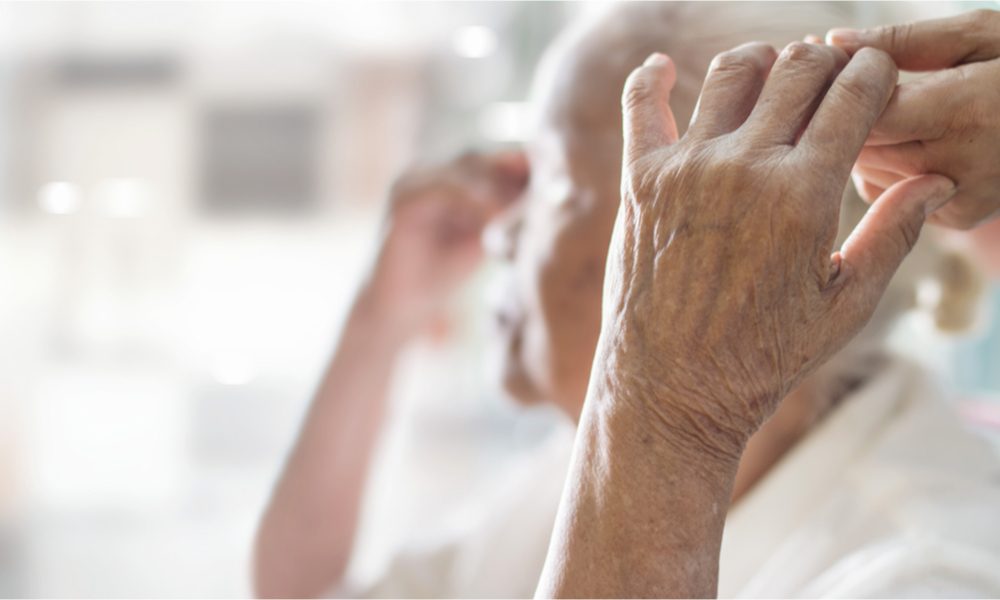 How to Prevent Dementia: The Endocannabinoid System

As mentioned, the hallmark of Alzheimer’s include the formation of fibril tangles and the loss of brain cells. This leads to  cognitive deficits that become progressively worse. And it is here that cannabis research is most focussed.

These changes in the endocannabinoid system (ECS) have important significance to research. Firstly, it suggests that the ECS has a role in regulating AD progression. Secondly, and more importantly, these findings suggest that plant cannabinoids (like THC and CBD) could have therapeutic benefit for Alzheimer’s patients.

This is the contradictory nature of cannabis medicine. Since there are many, many ECS receptors in the hippocampus and cortex areas of the brain, cannabis consumption can be associated with temporary memory loss and learning dysfunction. These are short term effects, and a recent JAMA study indicates that these symptoms resolve within 72 hours.

RELATED  Is it CBD or THC to Offer You the Pain Relief You Need?

THC May Preserve Neurons by Preventing Plaques from Forming

A study published in the Journal of Molecular Graphics and Modelling (2021), [2]P Krishna Kanchi, A Kumar Dasmahapatra. Destabilization of the Alzheimer’s Amyloid-Beta Protofibrils by THC: A Molecular Dynamics Simulation Study. (2021) Journal of Molecular Graphics and … Continue readinginvestigated the ways that THC interacts with amyloid plaques in the brain. The results, “show that the THC molecules disrupt the [formation of plaques] by binding strongly to them.”

The binding of THC to protofibrils, that were in the process of forming amyloid plaques, resulted in the creation of salt bridges. This greatly destabilized the process.  And “the destabilization of the protofibrils leads to the conclusion that THC molecules may be considered for the therapy in treating Alzheimer’s disease.” 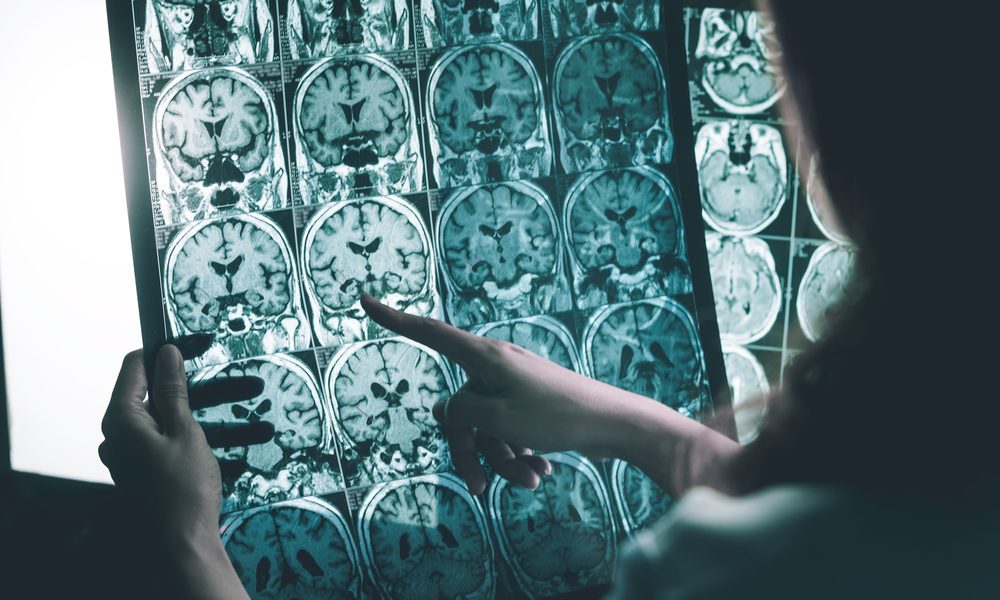 Previous pre-clinical studies have shown that administration of THC at 3mg/kg per day for four weeks lead to a reduction in Aß plaques and preservation of neurons. Additionally, according to research in human dementia patients, administration of synthetic THC analog, dronabinol (2.5mg) daily for two weeks improved neuropsychiatric profiles for agitation and aberrant motor and night time behaviours.

Can Cannabis Help with Symptoms of Alzheimer’s?

While the progression of memory loss for this terminal illness can seem very torturous and heart wrenching enough, the end stages also bring increased physical struggles. Unfortunately, many patients with dementia will also come to experience anorexia, sleeplessness, and increased agitation – especially at night. These are the behavioral and psychological symptoms of dementia (BPSD).

Of interest is that cannabinoids may help manage some of these symptoms of Alzheimer’s, including sun-downing and aggression. In fact, the publication Clinical Geronotologist (2020), [3]T Charernboon, T Lerhattaslip, T Supasitthumrong. Effectiveness of Cannabinoids for Treatment of Dementia: A Systemic Review of Randomized Controlled Trials. Clinical Gerontologist (2020) … Continue reading did a review of five recent studies that investigated exactly this.

Interestingly, THC from the cannabis plant did not reduce agitation. However, a synthetic version of THC, called nabilone, at 1–2 mg/day, had positive results. This pharmaceutical is currently prescribed for neuropathic pain nausea/vomiting.

The same review determined that dronabinol, a THC-based pharmaceutical, at 5 mg/day was able to target anorexic symptoms of dementia. This had a positive impact on weight.

It’s important to note that the difference in the results between cannabis and cannabis-based pharmaceuticals could be due to dosing. It is very difficult to accurately dose from the whole plant. In the end, this is why the review determined that, “robust randomized controlled trials” are needed to further explore the potential role of cannabinoids in managing BPSD symptoms. 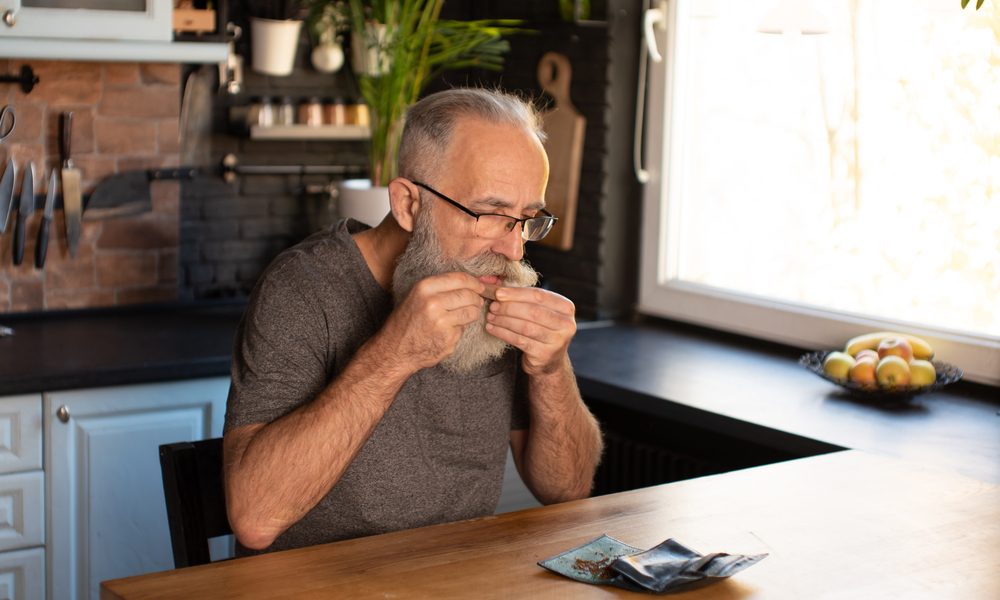 Is THC a Treatment for Alzheimer’s?

One research group has taken the cannabinoid research into Alzheimer’s to another level in their attempt to pinpoint exactly how THC breaks down Aß production at the molecular level. In the study, published by the American Chemical Society (2006), [4]L Eubanks, C Rogers, Beuscher, G Koob, A Olson, T Dickerson, K Janda. A Molecular Link Between the Active Component of Marijuana and Alzheimer’s Disease Pathology. Mol. Pharm. (2006) 3 … Continue reading the research group performed both computational and experimental analyses.

As they attempted to predict the fit between the THC molecule and one particular enzyme. The name of this enzyme is acetylcholinesterase and it’s responsible for breakdown of the neurotransmitter acetylcholine. One of the most dramatic changes observed in AD patients is this down regulation of acetylcholine by acetylcholinesterase. And in fact, the four FDA-approved drugs have a specific design to target this cholinergic system.

The researchers found that indeed, THC with its particular chemical structure fits into the acetylcholinesterase enzyme active site, which is the part of the protein that is responsible for exerting the actual enzymatic action (i.e. deactivation of acetylcholine).

The functional experiments confirmed that the inhibition of acetylcholinesterase, by THC, led to reduction of Aß aggregation. Additionally, according to a 2012 study, published in multiple journals, THC is a considerably more potent inhibitor of acetylcholinesterase-induced Aß deposition compared to the approved pharmaceutical drugs for Alzheimer’s.

The Future of THC as a Treatment for Alzheimer’s

The data demonstrates, clearly, that THC reduces Aß plaque formation in Alzheimer’s disease, at least in the animal model. The finding that THC acts as an inhibitor of acetylcholinesterase, puts its therapeutic value on par with similarly acting, approved pharmaceuticals. Finally, most recent evidence that THC prevents the formation of fibrils that lead to amyloid plaques is very promising for a potential pathway in how to prevent dementia.

Scientifically speaking, this is crucial in the development of new therapies, and the furthering of clinical trials.