Does Alzheimer’s Start with Damage to Endocannabinoid System?

Researchers at the Stanford University School of Medicine may have found the starting point for Alzheimer’s Disease, and — surprise! — it has roots in the body’s endocannabinoid system. Turns out this system may affect neuroplasticity in dementia patients.

It all comes down to a molecule called A-Beta (amyloid beta). This particle is a peptide, and is throughout the body. For years, scientists have thought A-Beta is a “substance of interest” for medical researchers. This is because of its heavy presence in the plaques that dot the brains of Alzheimer’s patients. But despite the interest, we still don’t know much about A-Beta or its specific function(s).

That’s why the Stanford research was such a revelation. It shows, for the first time, that A-Beta may weaken the brain’s connections by blocking the effects of cannabinoids. When naturally occurring cannabinoids cannot properly fulfill their roles in the brain, people have a harder time learning new information and recalling memories— two of the leading characteristics of Alzheimer’s Disease.

Amyloid Plaques Gum up the Brain

It happens like this: In a normal, healthy brain, specialized cells, called pyramidal neurons, sit around, receiving billions of signals throughout the day. Most of these signals are deemed unimportant and are ignored by the pyramidal neurons, which happily send the signals on to other parts of the brain. However, when certain important events occur—like when you touch a hot iron accidentally or have a breakthrough moment in understanding a math problem, for instance, these pyramidal cells wake up from their slumber and begin to fire. 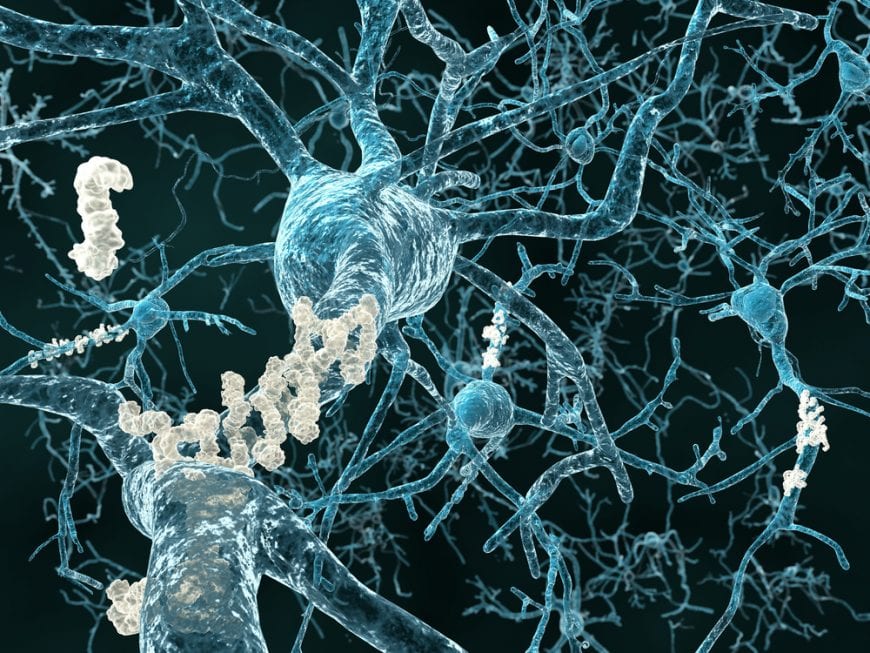 That process, in dementia patients and everybody else, is neuroplasticity. The changing of pyramidal neurons is what allows your brain to learn and retain new information. When you instantly remember where you left your keys or why walked into a room, that’s the result of pyramidal neurons firing up. They produce “Eureka!” moments.

That’s where cannabinoids come in. It turns out that when ordinary, unimportant information is passed through to pyramidal cells, the cells release endocannabinoids, which keep them from firing up and instead pass the information onto the next part of the brain. Essentially, endocannabinoids keep everybody calm and on-task.

Picture the process like an automobile assembly line. A piece of machinery comes down the belt to quality assessment workers, who make sure that everything looks right. If they spot something amiss— a loose screw for example — they press a button asking for help. If everything looks good, they press a button that sends the machinery on to the next station on the assembly line. In this metaphor, the QA specialists are the pyramidal neurons. When everything is fine, they press the endocannabinoid button to let the machinery keep moving. When something is wrong, they press the fire up button and work to fix it.

A-Beta is what happens when the button circuitry goes awry. The assembly line keeps moving without receiving signals from the quality assurance workers about whether the machine is functional or in need of a fix. This means that A-Beta prevents neuroplasticity in the brain of dementia patients. Without the pyramidal neurons firing, the brain becomes unable to learn information or retrieve memories, leading to the mental disarray that marks Alzheimer’s Disease.

The End of Alzheimer’s and Dementia?

Scientists don’t know the exact mechanism by which A-Beta messes with the body’s endocannabinoids. However, the Stanford researchers know where the interference occurs. In the presence of A-Beta, endocannabinoids are still able to reach and bind to key neural receptors. However, something in the process is wrong. They liken it to trying to use a key to start a car with a dead battery — the key still fits the ignition, but nothing happens.

Make no mistake: discovering the root cause of Alzheimer’s Disease is a big deal. It is the most common cause of dementia in older adults, and is among the top causes of death in the United States. It is a chronic, progressive disease with no known cure. This form of dementia already affects 1 in 3 seniors, which equates to 5.7 million Americans. Every 65 seconds, someone in the U.S. develops the disease.

According to the Alzheimer’s Association, the beginning stages of the disease is characterized by a difficulty in remembering newly learned information — which is exactly what happens when the endocannabinoids aren’t allowed to their job. If the endocannabinoid system can provide a way to understand the start of Alzheimer’s Disease, humanity will be one stop closer to banishing it from existence.