How it Works: The Endocannabinoid System

We’re just beginning to understanding this complex system, here’s what we’ve got so far.

During the 1980s, research into the effect of endocannabinoids on the human brain found that there was a specific binding site for them. In the early 1990s, the two major cannabinoid receptors saw identification and cloning. These are CB1 and CB2. Both are G protein-coupled receptors. Since this discovery, researchers have learned more about the endocannabinoid system and mechanisms for its involvement in various diseases. As a result, cannabis, or cannabinoids, have become the focus in developing new therapies, and the medical use of cannabis has become a target of public policy.

Where do they appear?

The first type of cannabinoid receptor, CB1, is found primarily in the brain and on tissues associated with the central nervous system, such as neurons in the spinal cord. However, it has also been found in peripheral organs like the pancreas, digestive tract, and liver.

In the brain, CB1 receptors are present in high densities in certain structures, like the substantia nigra, basal ganglia, cerebellum, and hippocampus. Other areas of the brain have much lower densities, like the brainstem, which contributes to cannabis’ safety record (can’t overdose). 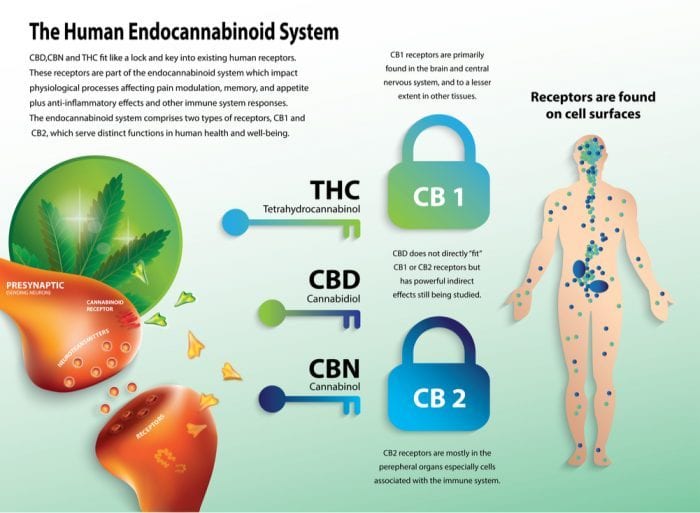 Some believe CB1 receptorsc ause the psychoactive effects of cannabis. These receptors also play an important role during brain development and in several signalling pathways in the brain. These pathways are responsible for cognition, neuronal growth, and the regulation of reward and mood systems. Activation of the CB1 receptor is therefore not only responsible for the euphoric high associated with THC, but also for a variety of therapeutic benefits like treating anxiety, pain, and post-traumatic stress disorder (PTSD).

Another cannabinoid found in the Cannabis plant, delta-9-tetrahydrocannabivarin (THCV) is also known to bind strongly to the CB1 receptor, although THCV blocks the binding site on the CB1 receptor, inhibiting its activation.

In the brain, the CB1 receptor often appears in neural synapses. Unlike the receptors associating with most neurotransmitters, the CB1 receptor often appears in the presynapse neuron. Postsynaptic neurons create and release Endocannabinoids. When the CB1 receptor activates, it prevents further release of neurotransmitters. Therefore, it seems that the endocannabinoid system functions as a negative feedback loop. For example, it can prevent the release of glutamate. Scientists believe glutamate is the mechanism behind the neuroprotective effects of cannabis against excitotoxicity. However, CB1 activation then increases the release of dopamine, which could contribute to addiction. 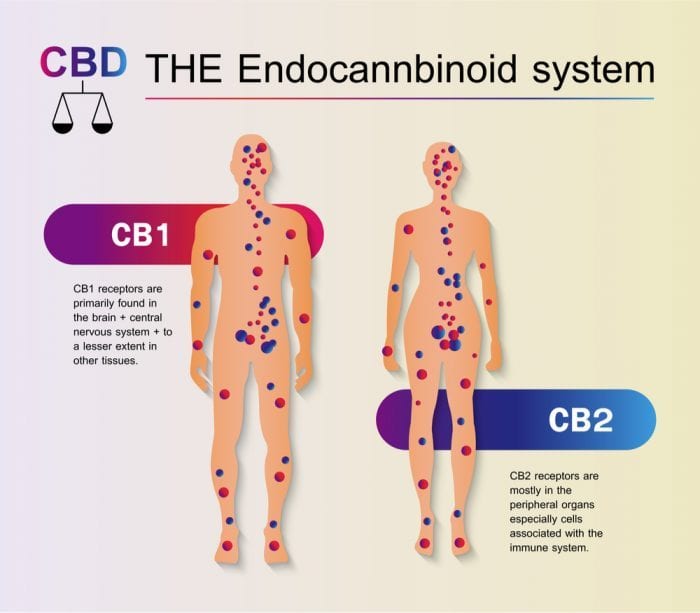 The CB2 receptor primarily appears in immune cells.  Some scientists hypothesize that the CB2 receptor evolved as a defense mechanism. They think so because suppresses inflammatory responses and helps neuroprotective responses to brain injuries. The CB2 receptor might also help regualte the pain relieving properties of cannabis. THC and CBD both bind to the CB2 receptor, although again, CBD has a low affinity for it. THCV also inhibits the CB2 receptor. Many researchers have developed synthetic cannabinoid molecules that can bind specifically to the CB2 receptor and not to the CB1 receptor in order to obtain therapeutic effects of CB2 activation without causing psychoactive side effects.

The low affinity of CBD for the cannabinoid receptors causes some researchers to hypothesize that there must be unknown receptors in the endocannabinoid system. 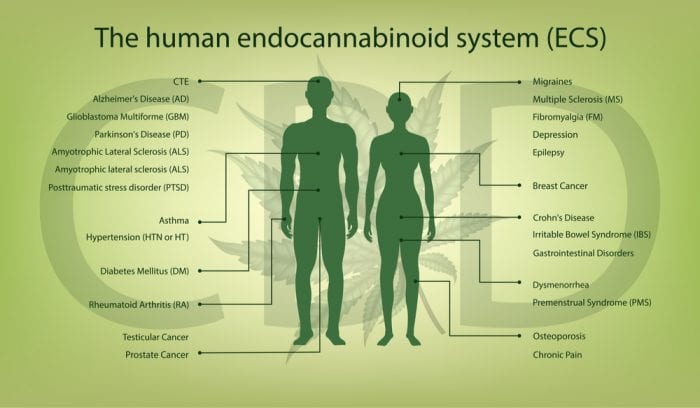 Other G protein-coupled receptors appear as cannabinoid-like. In addition, there are other receptors, like the transient receptor potential vanilloid type 1 receptor (TRPV1) ion channel. Cannabinoids also activate these, so there is potential crossover between the endocannabinoid and other signaling systems. CBD also inhibits the activity of fatty acid amide hydrolase (FAAH). This is the enzyme responsible for breaking down endocannabinoid anandamide. As a result, CBD can create higher levels of anandamide, which targets the cannabinoid receptors with higher affinity than CBD but without psychoactive effects of THC.

In many ways, we are just at the beginning of the research. There will be a steep learning curve when it comes to the inner-workings of the endocannabinoid system. It is complex, but deciphering its mysteries will lead to important healing practices in the future.