What are the advantages of LED and how do they differ from alternative lighting systems?

This is the least efficient lighting type. And it doesn’t produce the wavelengths appropriate for plant growth.

As the most economically viable lighting option, CFL lighting systems use one third to one fifth the energy of incandescent bulbs. They last eight to fifteen times longer than incandescent bulbs and have an energy efficiency of seven to ten percent. Another principle advantage is that they come cheap. Also, individual light setups allow you to turn on what you need when you need it.

HID lights are another cheap lighting option. As a tried and trusted solution for indoor crop cultivation, they’re simple to use and don’t require a major investment to set up and run.

The main drawback associated with using this type is that they require an electric ballast that serves to limit the intensity of the electric current. This means that they can’t be used with standard sockets and draw additional power. HID lights have a short life span of around ten thousand hours, something that makes them a less desirable option for many growers.

Invented in the mid-1950s, HPS lighting systems are more flexible in producing higher volumes of usable wavelengths. One drawback, however, is that they emit substantial heat and often require specialized venting to control temperature. When compared to CFL lighting systems, these require a high initial investment and are less energy efficient.

LEDs produce visible light spectrum wavelengths ideally suited to plant growth. Invented in the early 1900s, they’ve become more refined in the early twenty first century and are now the most energy-efficient lighting solution on the market. Efficiencies in excess of twenty percent are common and their lifespan is six to seven times greater than CFL solutions. LEDs produce zero heat while running and they emit the exact wavelengths required to target plant photosynthesis. Many cannabis grow rooms are commonly lit with a bright purple light — these wavelengths are perfect for plants, but actually harmful to human eyes so protective eyewear must be worn. The principal drawback of LED systems is the substantial initial investment required. 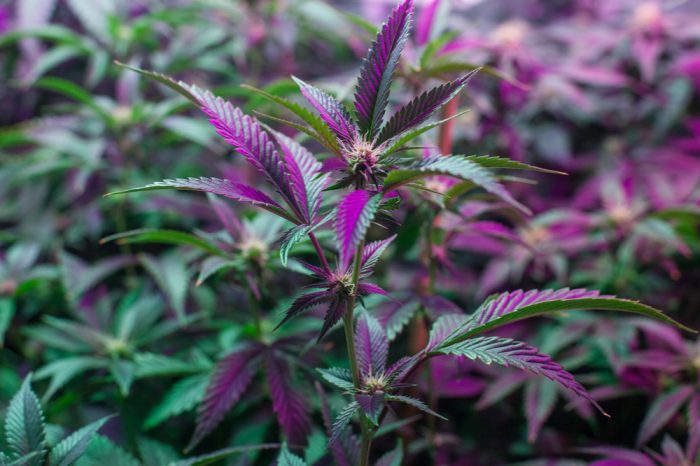 LED grow lights have made substantial leaps in terms of efficiency and cost in recent years. Having surpassed many other lighting systems, many commercially available LED lighting solutions exist on the market for cannabis production; and they exhibit the following advantages.

An additional report published in New Frontier Data (2018), demonstrated that canopies exposed to LED lighting generate twice the weight of usable product per kWh of energy over HID-lit canopies.

Fluence by OSRAM is a U.S.-based global provider of energy-efficient LED lighting solutions. A report published in conjunction with San Francisco-based Eve Farms (2019), disclosed that increases in both cannabinoid and terpene production of eleven percent were noted after switching from HPS to an LED lighting system. In addition, they reported the presence of new cannabinoids not previously present in plants grown under HPS lighting.

In light of recent developments in the cannabis industry, this is an important point. Where growers were once judged on the percentage of THC in their products, we’re now seeing a shift toward more awareness of the medicinal properties of minor plant compounds. More and more dispensaries provide printouts of cannabinoid and terpene profiles for their products. As a result, even recreational consumers are beginning to understand that there’s much more to cannabis than THC content.

HPS bulbs are replaced at regular intervals — usually once every twelve months. LED grow lights, on the other hand, generally come with a warranty for fifty thousand hours — or approximately five years.

In large grow facilities, the costs of both material and labor involved can quickly rise over time compared to LED grow lights.

LED grow lights produce less heat when compared to other forms of lighting. This is due to the fact that LED grow lights aren’t wasting energy producing wavelengths that plants can’t use. Less energy means less heat, and thus the negation of complex cooling systems.

Where many lighting setups often contain dangerous compounds such as mercury, LED grow lights do not. They are therefore seen as a much safer alternative in the case of breakage, where crop contamination is a real threat. After all, no one wants to smoke mercury. 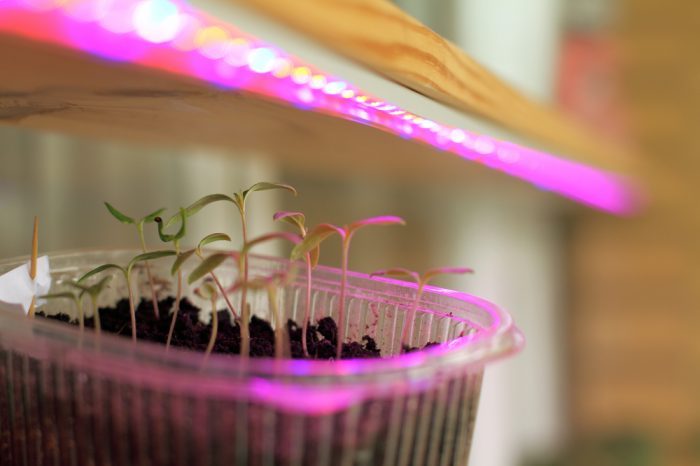 As the first type of LED lighting system available on the market, they consist of an array of small red and blue LEDs that result in a purple hue.

The principal advantage is the low cost, while the main drawback is their comparatively low power and reliability — something that ultimately affects yield.

COB stands for “chip on board” and consists of an array of hundreds of LEDs on a single chip. Among the most efficient form of LED lighting, they produce a spectrum that’s akin to that of the sun.

The principal advantage of COBs is their energy efficiency, their intensity, and how deeply their light penetrates into the plant canopy. On the downside, COB LED setups are expensive. Many growers mitigate the costs by including lenses and reflectors to harness the available light more efficiently.

Spread-style LEDs consist of a large number of LEDs spread across a large panel. Some solutions include spider-style LEDs with spider-like “arms” with LEDs instead.

The main advantage of spread-style grow lights is energy efficiency. They are among the most efficient lighting solutions on the market. But with that increased efficiency comes greatly increased expense in setting up and maintaining such a system.

Lighting the Path for Future Growers

We are still very much in the infancy of our understanding when it comes to appreciating how different light spectra affect the production of plant compounds. But the studies carried out thus far do indicate that optimizing the spectra does indeed lead to improved yields, and the production of additional medicinal compounds. And for now at least, LED grow lights do this better than any other solution currently available.