Laws are mostly in place to protect legal regions, but there are some severe penalties for mailing weed.

But, while bringing green treats to family in legalized states carries no risk, it’s helpful to understand the laws about mailing weed in the U.S. or Canada. While Canada has a (mostly) one-size-fits-all option owing to its recent legalization, options in the United States are more varied.

While mailing weed has long been a way that black market buyers and sellers have moved product, the consequences of running afoul of post office laws are exceptionally harsh.

For individuals, the rules on mailing weed are straightforward. Canadians can send up to thirty grams of dried cannabis flower through the post (although the legal age of cannabis shippers varies by province).

The box for cannabis, however, must be built like a tank. All cannabis shipping containers must be tamper-proof, odor-proof, and leak-proof on both the out and inner packaging. The container also must not give away what’s inside — so no scrawling “There’s weed in here!” on the lid. The Canadian post office recommends buying scent-blocking packages directly from them.

If anyone desires to ship more than thirty grams of cannabis flower, for instance if someone has been extra-good this year, more than one package is necessary. The caveat is that all shipments must follow applicable legislation and regulations.

Times have changed since the Sears catalogue sold mail-order cannabis. Not all cannabis products are viewed the same way by the federal government, and the rules covering them are different.

Since the passage of the 2018 Farm Bill, which legalized hemp across the U.S., the post office now gives hemp and its derivatives the green light. All CBD products containing less than 0.3 percent THC are also one hundred percent OK to mail out. That holds true for mail within CBD legal states. Things can get sticky when crossing some state lines, though.

RELATED  Cannabis in Biblical Times: A Better Type of Stoning

Despite the legalization efforts of several states, cannabis is completely illegal to mail in the U.S. That includes recreational weed as well as medicinal cannabis.

The United States Parcel Service (USPS) is a division of the federal government, and therefore must abide by national laws. This includes laws that still consider cannabis a Schedule I illicit substance.

People living two doors away in Colorado cannot mail legal cannabis to each other. One person living in California cannot mail legalized weed to his other address in Oregon, where the same product is also readily available on dispensary shelves.

According to WestWord, a publication out of Denver, Colorado, law enforcement authorities intercepted more mailed weed every year since the state legalized cannabis. In 2016, the total number of intercepted packages was eight hundred and five, up from two hundred and thirty four in 2012.

That doesn’t seem like a lot. But, because it’s impossible to know how many people were mailing weed out of Colorado and didn’t get caught, it’s hard to tell if the number of seized shipping packages represents an increase in mailed cannabis or an uptick in enforcement.

That may lead some people to believe private couriers, such as UPS and FedEx, are safer options. However, U.S. News & World Report suggests the opposite is true. As private companies, commercial carriers cannot offer the same protective government standards that apply to the USPS.

If law enforcement officers want to open a package shipped via a private courier company, all they need is the company’s OK. Opening U.S. mail, however, requires a warrant. Some illegal cannabis movers therefore conclude that cops don’t want to go through the extra hassle involved in peeking into the mail.

All the same, there are great stoner legends about mailing weed. Many of the highest-profile busts have only come after many, many pounds of the stuff have been distributed via the nation’s mail trucks.

RELATED  Is 2020 The Year For Major Cannabis Law Reform In America?

A report by a Chicago television station quoted the director of the Rocky Mountain High Intensity Drug Trafficking Area as estimating that law enforcement was only catching about ten percent of cannabis sent through the mail in 2015. If that figures remains the same, it could feel tempting to risk it, and make someone’s holiday a bit brighter. 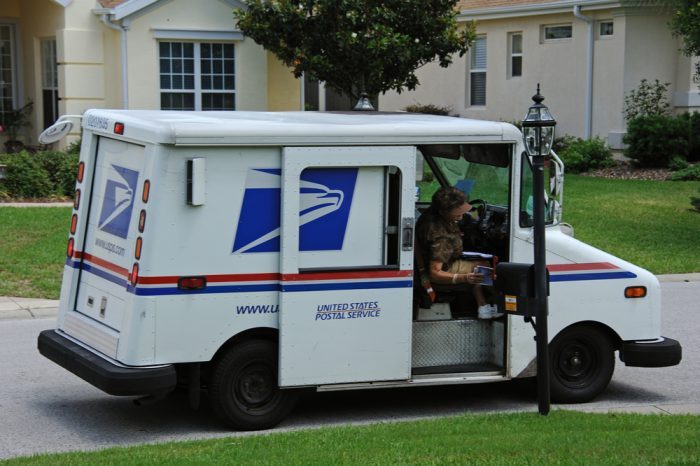 But is the temptation to gift cannabis actually worth it?

The penalties for getting caught mailing weed aren’t set in stone. They vary depending on several factors, such as the state and the amount of cannabis sent. Also, whether it was paid for and if many others were involved, not to mention the defendant’s criminal history.

Right now, attempting to mail less than fifty kilograms of cannabis carries a maximum federal penalty. That’s up to five years in prison and a $250,000 fine for people without a criminal record. And that’s just for mailing weed. Chances are, that won’t be the only charge.

Prosecutors could also charge attempting postal criminals with other crimes. Things like conspiracy, possession with intent to distribute, and mail fraud, etc. Most of those are felonies, which carry penalties beyond the time served and money lost. In short, it may be possible to get away with mailing weed, but it’s probably not worth the risk.

If you need to make someone’s Christmas extra merry, stick to CBD for mailed gifts. Or bring cannabis over yourself — provided it’s in a legal state.