Michael Brooks Lost His Kids Because Cannabis Was His Medicine

On a porch in Tennessee, a father is dying alone.

Michael Brooks is dying of Hepatitis C, but that’s the least of his worries. What he really cares about, now, is getting his story out to the people in the little time he has left.

You’ve probably heard the moral of this story before: Cannabis has medicinal value, innocent people are harmed because it is misunderstood, and families are being torn apart because of unjust prohibition laws.

I thought I had heard all the stories before, but that was before I met Michael Brooks and heard his. It’s not a long story, but as Brooks says, it could have been even shorter in a legal state.

It should have gone something like, “I’m a good dad who got sick and found a plant that made me well.” 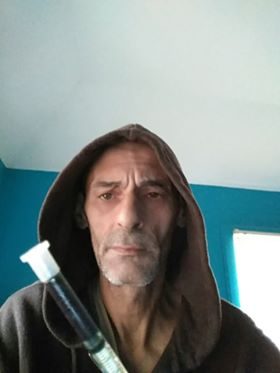 Michael Brooks is fifty-three, but bald and withered well beyond that. In the grainy, low-quality, Skype video he might be mistaken for a man twenty years his senior, or maybe older.

That’s probably because Michael Brooks has been sick nearly his entire adult life, but didn’t always know it. Brooks suffers from what is often called, “The Silent Killer.” Hepatitis C is a liver destroying disease that can hide until the damage is beyond repair. Still, it’s not the worst thing he’s dealt with. The worst thing was the day the state took his children away.

Worse than Hepatitis C, the real silent killer in Michael Brooks’ life has been demoralizing, draconian, and debilitating prohibition laws that led the State of Tennessee to forcibly apprehend his children. And all because of his choice of medicine.

Cannabis Restores Michael to his Life

More than four years ago now, Brooks was incredibly sick. While fighting organ failure and attempting anything he could think of to fight off Hepatitis C, he stumbled upon article after article about the benefits of cannabis for a whole host of medical conditions. While cannabis for Hepatitis C has not been the subject of any clinical trials, Brooks was desperate, and decided that –against all odds— he’d try something, anything, to fight this off. No matter what, he thought, it would give him relief from the terrible pain that he experiences as his organs slowly shut down.

So Michael Brooks became what he describes as “a cannabis refugee.” He is one of an ever-growing population of Americans who travel, or even pick up and move, to legal states.

And, for Michael Brooks, it worked. Though he didn’t have the money to move to Colorado, he had a car. So, he hit the road in search of hope. What he found was not just pain relief. Brooks describes that, as his treatments became more frequent, his “viral load” dwindled. For the first time in years, Michael Brooks felt like a healthy man.

Things were on the up! Thinking about their healthy future, Brooks and his wife had a second child. The Brooks boys were always healthy, until a sudden viral sickness landed both of them in Vanderbilt Hospital. And there, a routine parental drug check came up positive for Brooks.

Brooks was honest with the hospital staff. He admitted happily that, of course, he would have THC in his blood, he legally used it in Colorado. He was happy and amazed that it was still in his system. “That means it was still in there doin’ me good!” he said.

Staff then informed Michael Brooks that he was a dependent drug user. After that, things happened very quickly.

Brooks remembers it in a haze of pain, weeping as he speaks of the memories of that day. A crowd of police, child services employees, and his two-year old and seven-month old being carried away. And his two year old reaching and screaming, “Daddy!”

Initially, The State allowed Michael Brooks to see his children every two weeks. Shortly after, the DCS decided it was too jarring for Brooks’ children to have him appear and disappear in such short visits. Shortly after that, they decided he was too sick to properly care for them anyway. 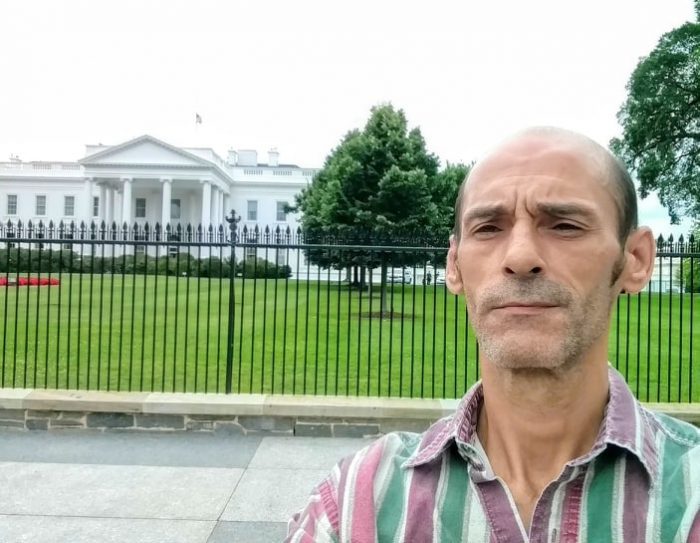 Michael Brooks, when his health was good enough that he could travel to Washington to raise awareness.

Dogged Determination has Kept Him Alive

And he is sick. While we Skype, Brooks has bouts of pain so severe that at one point, he leans forward, grimacing, before dropping his phone. I worry he’s having a heart attack, but after a moment he picks it up, apologizes deeply, and doggedly continues his story.

If there is anything keeping Michael Brooks alive at this point, it this dogged determination. He can no longer travel to legal states for cannabis. His doctor “medically grounded” him, to use his words. He was about to head to Colorado for another visit before his latest crop of issues started.

“I’ve got the cannabis refugee pack in my trunk right now. I was about to head for California when my doctor told me I’d die if I accidentally nicked myself, or cut myself, or anything like that. They can’t even give me any blood transfusions right now because it’ll damage my spleen more. They say I would die within days if they did that.”

Michael Brooks says he might make it a few more weeks. Overall, he says, “I’m ready to let go of my life – but I don’t want to die without my purpose being fulfilled.”

What’s his purpose? To educate people. To remind them that he and his children were denied a normal life, all over  his choice of medicine. A medicine that was working, by the way.

Next – Michael Brooks will die. But, how can we stop others from facing this fate? Well, for a start, maybe the recognition that Brooks having his children taken from him in Tennessee for medicine he took legally in Colorado is an unjust, despicable, law.

Lastly, you can tell Michael’s story. His case has already garnered international attention, but obviously not enough, if you didn’t already know his name.

So, make a dying man happy and share his story. Fight against unjust laws. #legalizeit

A Master's Student from London Ontario with an interest in all things academic and also mixing those with the cannabis industry.