In both in vitro and animal models of neuroblastoma, researchers found CBD effective. What does this mean for the future?

The scientific interest surrounding cannabis as a cancer therapy appears to be growing. More and more preclinical trials are detailing the positive effects that cannabinoids, particularly THC and CBD, can have on various cancer cell lines. Neuroblastomas are one of the latest to join the list. Researchers from Israel proved that in vitro and in vivo models of neuroblastoma were sensitive to CBD treatment, laying the groundwork for future clinical trials, and potential human treatment.

Neuroblastoma is a type of cancer that usually affects children under the age of five. But, cases can occur in older children as well. They start as neuroblasts, immature nerve cells that a growing fetus makes as part of its normal development process. Most neuroblasts mature into nerve cells by birth, but some may remain. These remaining neuroblasts can form a tumor called neuroblastoma. Like most cancers, the earlier the diagnosis, the better the outcome.

In children with stage one neuroblastoma, surgery may be the only treatment they need. Unfortunately, children who progress to stage 4 neuroblastoma will often require intensive treatment with a combination of therapies. Despite a multimodality approach, neuroblastoma prognosis is poor, and survivors experience serious side effects related to treatment toxicity. [1]London, W. B., Castel, V., Monclair, T., Ambros, P. F., Pearson, A. D., Cohn, S. L., … & Matthay, K. K. (2011). Clinical and biologic features predictive of survival after relapse of … Continue reading Non-toxic treatment options such as CBD, if proven effective, present as a very attractive treatment option.

In a study published in Current Oncology (2016), the researchers exposed neuroblastoma cells to THC and CBD in the lab and then measured cell viability after twenty-four and forty-eight hours. [2]Fisher, T., Golan, H., Schiby, G., PriChen, S., Smoum, R., Moshe, I., … & Mechoulam, R. (2016). In vitro and in vivo efficacy of non-psychoactive cannabidiol in neuroblastoma. Current … Continue reading

Both THC and CBD demonstrated antitumorigenic properties, but CBD had superior effects. Although THC decreased cell viability, the differences were not statistically significant. CBD killed most of the cancer cells within twenty-four hours and after forty-eight hours, almost all the cells were destroyed. Additionally, compared to non-treated cells, CBD dramatically reduced cell invasiveness. By examining morphological changes, the researchers determined that these anti-cancer effects were mediated by apoptotic cell death. Microscopic analysis showed that CBD treatment resulted in the cells becoming rounded and swollen, losing their normal shape.

RELATED  THCP is a New Cannabinoid That Is Stronger Than THC!

Further, in the second part of the project, the researchers induced neuroblastoma tumors in mice and monitored tumor growth on a weekly basis. When the tumors reached a consistent size, the researchers randomized the mice into treatment and control groups. Similar to the in vitro experiment, treatment groups consisted of either THC or CBD, but not both. The results were consistent with the in vitro findings. Compared to untreated and vehicle-treated groups, CBD and THC treated mice experienced a significant reduction in tumor growth. However, CBD was more effective than its psychoactive counterpart. The CBD treated tumors had a median size of 2.31 cm3 compared to 3.46cm3 for THC-treated mice, 4.31cm3 for vehicle-treated mice, and 4.28 cm3 in untreated mice.

Again, the researchers determined that apoptosis was behind these in vivo anti-tumor effects. They analyzed tumor tissue samples with the apoptosis indicator cleaved caspase 3. The cells positive for cleaved caspase 3 were significantly higher in CBD-treated tumors, indicating greater levels of programmed cell death. How are these apoptotic mechanisms expressed? Interestingly, it appears that the most well-studied cannabinoid receptors may not play much of a role. 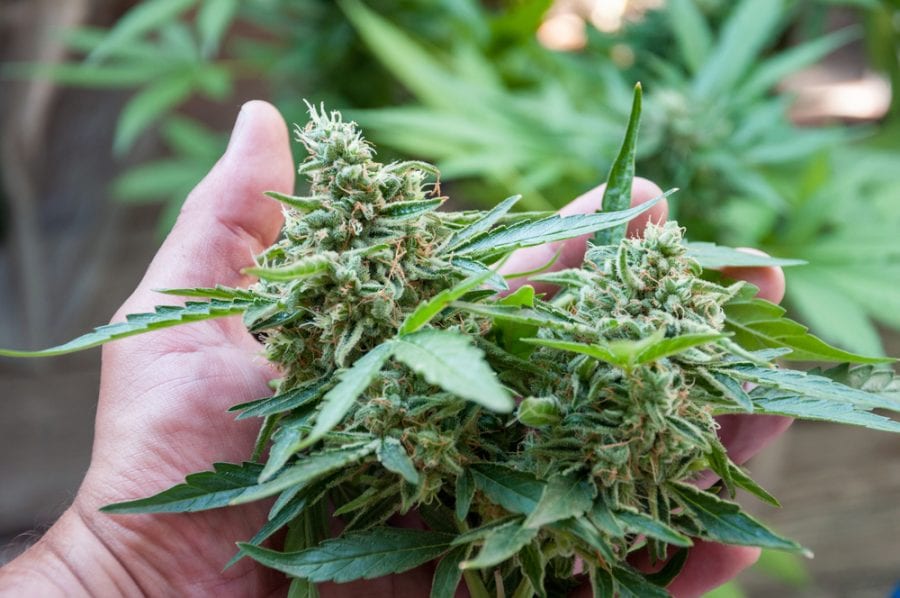 The previous study’s authors note that although CBD’s neuroblastoma antitumorigenic molecular mechanisms are not fully understood, there is evidence that strongly suggests these effects are mediated by receptors other than CB1 and CB2 receptors. A review published in the British Journal of Clinical Pharmacology (2012) details the many other receptors that could be playing a major role in the destruction of neuroblastoma. [3]Massi, P., Solinas, M., Cinquina, V., & Parolaro, D. (2013). Cannabidiol as potential anticancer drug. British Journal of Clinical Pharmacology, 75(2), 303-312.

Multiple studies have shown that CBD acts as an agonist for vanilloid receptor 1, TRPV2, TRPA1, PPAG, and 5-HT1A. Moreover, others have demonstrated that CBD is an antagonist for TRPM8 and GPR55 receptors. A sound scientific rationale and evidence of preclinical effectiveness set the stage for investigations into the clinical effectiveness of cannabis-based medicine for treating neuroblastoma.

Where is the Research Headed Next?

As a non-psychoactive drug, CBD is an attractive treatment option for a disease that primarily affects children. However, considering that CBD and THC independently demonstrated anti-cancer effects, would a combined CBD/THC treatment have provided an even stronger benefit? The entourage effect theorizes that cannabinoids work together, and when taken together, they produce a stronger effect than when taken alone. This may be worth exploring in further clinical trials.

Importantly, there is evidence that CBD acts as a negative allosteric modulator at CB1, interrupting how THC binds to the receptor. [4]Laprairie, R. B., Bagher, A. M., Kelly, M. E. M., & Denovan‐Wright, E. M. (2015). Cannabidiol is a negative allosteric modulator of the cannabinoid CB1 receptor. British Journal of … Continue reading This reduces THC’s psychoactive and cognitive effects and could potentially make THC a more appropriate treatment in children. However, clinical trials will need to confirm the safety and effectiveness of a CBD/THC combined neuroblastoma therapy before widespread clinical implementation.

RELATED  Sativa and Indica are Dead. Long Live the Chemovar