Odor Control For The Pungent Smell of Cannabis

Don’t like the smell of cannabis after it was smoked inside? There are multiple ways to get around it – even odor control paint.

The strong smell of cannabis is both a blessing and a curse. While those potent smelling terpenes provide much medicinal benefit, the smell of cannabis smoke indoors can lead to a lingering odor that’s hard to remove and potentially dangerous to long term health.

One of the most significant downsides of smoking cannabis indoors is getting rid of the lingering odor. Known as third hand smoke, it’s the smell that lingers long after the secondhand smoke clears the room, where particles from the smoke stick to sofas, carpets, curtains, and even walls.

It often upsets landlords who must remove the smell before renting. But behind that odor lies the active chemical compounds that many scientists believe lead to a significant decrease in air quality that can compromise the health of individuals living in the house.

While no scientific studies exist on how it relates to cannabis smoke, third hand tobacco smoke is much more widely studied.

A study published in Environmental Health Perspectives (2011) investigated the dangers behind third hand tobacco smoke. Researchers noted that pollutants that remain on surfaces and in dust after smoking are later re-emitted back into the gas phase, or react with oxidants and other compounds in the environment to yield secondary pollutants.[1]Burton A. (2011). Does the smoke ever really clear? Thirdhand smoke exposure raises new concerns. Environmental health perspectives, 119(2), A70–A74. https://doi.org/10.1289/ehp.119-a70

Researchers believe that children may be at most risk to these pollutants as they are more likely to crawl over and touch contaminated surfaces. As a result, researchers noted that they “consume up to a quarter gram per day of dust—twice as much as adults.”

While science can’t definitively prove that third hand cannabis smoke is harmful, for now, it seems best to be prudent. After all, combust any form of plant matter, and it will create carcinogenic compounds.

Over the years, indoor tokers made many failed attempts to find a solution that actually removes the odor rather than merely masking it. One unique solution is a fresh coat of specially-formulated paint that absorbs odor molecules. 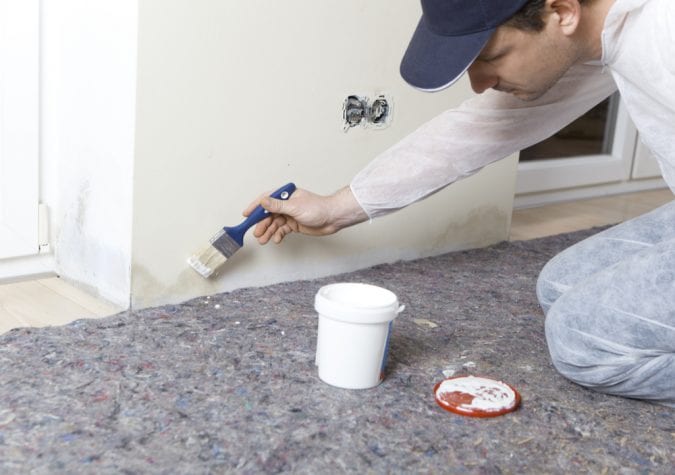 The Colorado-based company, Ecobond, came up with the unique solution of paint that can absorb the smell of cannabis. Known as the Odor Defender, the advanced formulation comprises specialty resins, food-grade mineral additives, and alginate from seaweed, which is one of the most effective absorbers of toxic pollutants.

How Effective Can A Paint Be On Odor Control?

Alginate is highly absorbent, and can soak up and remove pollutants such as ammonia, bacteria, and heavy metals from wastewater. This ability makes it a phytoremediator, a quality it shares with hemp.

When incorporated into a paint solution, it’s able to absorb thirdhand smoke from walls or from within the environment. By trapping and neutralizing them, the root cause of the odor is no longer active, and the odor disappears.

Patchouli Oil in a large jug – consumers commonly use this essential oil to cover the smell of cannabis.

Other Options for Cannabis Odor Control

If painting isn’t your thing, or it all just seems like too much work, then there are several other useful hacks for odor control. If you’re not yet willing to step outside to smoke, then other ways of removing indoor odors involve masking it.

This fragrant oil is highly effective at masking the smell of cannabis smoke. When applied, it works remarkably well at removing odor from clothes, carpet, and the air. What’s more, Patchouli oil is known for its antidepressant and aphrodisiac qualities while providing an eco-friendly way to tackle the issue of odor control.

It’s far from the ideal solution, but it is a common household item and may be effective in some instances. Febreeze doesn’t remove the odor but merely alters the offending molecules so as they can’t bind to odor receptors. This means they’re still present, but visiting guests won’t smell them.

Another option to mask the smell is burning incense or scented candles. Both options give off a range of natural scents. They may well fool the brain into thinking that the smell of cannabis smoke has all but disappeared. No, they’re not the ideal solution in terms of actually removing the odor. However, they can serve to set a mood that may take the spiritually inclined a little deeper with the plant.

Those who don’t want the smell of cannabis in their homes won’t want it on their person either. Several options exist, including mint-flavored chewing gum or mouthwash for the breath, and perfume or cologne for the body.

What about those who would rather go the smoke-free route? In this case, the new expanding markets that result from legalization provide consumers with many combustion-free methods of administration. For those who are stuck indoors and must medicate, there are tinctures, edibles, beverages, and dab-able concentrates that’ll help avoid the problems associated with third hand smoke.