The progression of Parkinson’s stages can be unpredictable and place a huge economic burden on the patients and their families.

Thanks to work by the Michael J. Fox Foundation, we now know just how much Parkinson’s Disease costs the country on an annual basis. Their newly released report shows, for the first time, the real economic costs of this debilitating disease: Parkinson’s costs the US a staggering $52 billion every year. As the disease progresses through the five Parkinson’s stages, healthcare costs rise, and the economic burden grows.

Parkinson’s Disease and cannabis have a long history, at least so far as cannabis research goes. The research to date has looked at THC, CBD, and full-spectrum options, all with mixed results.

In some studies, it did nothing; in others, it demonstrated statistically relevant results. With the economic burden as high as it is, a natural plant-based approach to treatment is worth a serious investigation. We still have a lot to learn about the various Parkinson’s stages and how cannabis might help.

Quick Recap: What are the stages of Parkinson’s Disease?

Parkinson’s Disease primarily affects people who are middle-aged or older. Approximately 94 percent of those affected are over the age of 50. There are about 10 million people around the world and nearly one million in the US who have the disease.

The signs and symptoms range, especially in severity. Depending on progression of  Parkinson’s stages, quality of life can vary. Patients usually experience tremors, rigid muscles, slowed movement, impaired posture, impaired balance, speech and writing changes, and loss of control over automatic movements like blinking and smiling.

A diagnosis comes with a placement on the Parkinson’s stages index, covering levels one through five. The severity of symptoms increases with each stage, with larger effects on one’s life. In the first stage, the signs may be barely perceptible, and the disease does not influence quality of life. In the final stage, patients can no longer perform daily activities and usually require a wheelchair. They may even have delusions or hallucinations.

Is Parkinson’s on the Rise in the US?

A regional survey working with 30 years of medical records sourced from between the years 1976-2005, shows us that in specific US populations the disease is more common today than in years past. Notably, the research is limited in scope, as it is focused on residents of Olmsted County, MN, and on predominantly white residents.

However, in the 30 years of records, the data analysis discovered the rate of Parkinson’s disease in men increased by over ten percentage points. The increase in the disease was most notably for people born between 1915 and 1925, who would be over the age of 70.

If we go into the numbers from the Michael J. Fox Foundation’s report, the implications are clear. Out of the $52 billion in annual costs related to Parkinson’s Disease, the story linked $25.4 billion to direct medical expenses. These cover hospital visits and medication. Patients and their families predominantly bore the burden of the other 50 percent. For them, the cost of the disease means missed days of work and loss of jobs. It can also force family members out of work and into caregiver roles.

These rising costs have been best described by Parkinson’s research funding advocate, Steve DeWitte. As he stated so passionately in the report,  “Beyond the rising costs of medications and healthcare, disease progression has led to some role reversals at home, and the need to secure outside services …. Family relations are strained and insecurities rise as the family adjusts to the latest symptoms and increased expenses against a fixed and shrinking income.  And, not knowing what symptoms may come next makes it even harder to plan financially for the future.”

How does cannabis play a role in alleviating the economic burden, both for the government and for the families of Parkinson’s Disease? Is it a cure for the disease or for symptom control? What do we know so far? 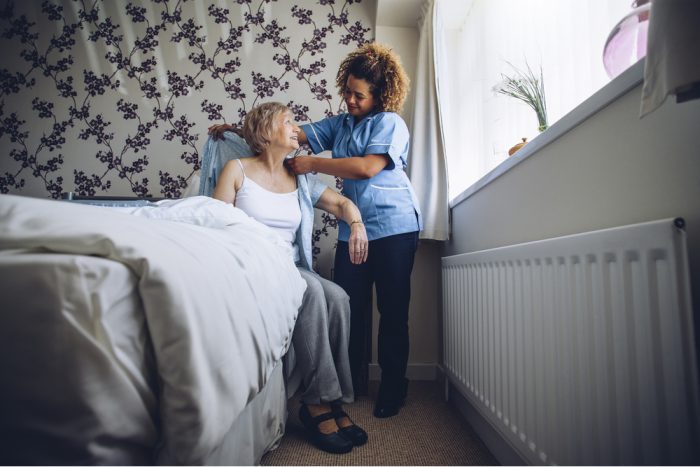 Based on what we know about the cause of the disease and Parkinson’s stages, cannabis isn’t a miracle cure. Instead, it may provide a better quality of life and reduce challenging symptoms.

In “Cannabis Therapeutics and the Future of Neurology”, Ethan Russo looks at the research thus far to paint a better picture of what cannabis offers for treatment options. Russo outlines several small studies on patients with Parkinson’s disease using different cannabis preparations.

While an oral THC:CBD extract did not seem beneficial to reducing the signs and symptoms, a pure CBD extract did. A pure CBD extract helped reduce the signs of psychosis in some study participants, which is typically a later sign (Stage 5) on the Parkinson’s stages index. Another CBD-only study found CBD was helpful for reducing symptoms more generally.

Some studies looked at cannabis but failed to measure the product for cannabinoid content. Russo notes two worth reviewing, one which showed that smoked cannabis had “showed acute benefits on tremor, rigidity, and bradykinesia,” and a second study which demonstrated “great improvement, particularly on mood and sleep.”

Cannabis’ ability to improve sleep is one of the most exciting areas of Parkinson’s research. Russo discusses how certain preparations help patients with rapid eye movement sleep disorder, a disorder which increases in severity as the patient progresses through Parkinson’s stages.

Although research is not yet conclusive about the benefits of cannabis for the disease, it does strongly suggest the plant has something to offer. Patients with Parkinson’s Disease may find relief from their everyday symptoms. Or they may find the progression of the disease slows with the use of medical cannabis.

If taken early, patients may be able to keep their jobs longer and avoid in-home care for as long as possible. They may also reduce the other medications they are taking – which all lead into reducing the national economic burden of the disease.