The Growing Surge of Medical Refugees

Medical Refugees are a new breed of patient that have to leave their home state to access cannabis medicine.

The process by which the legalization of cannabis is spreading across the US is a telling one. Grassroots movements that take hold in distinct corners have led individual states to pass legislation in direct opposition to the outdated beliefs and attitudes at the federal level. To the lateral thinkers in society, it’s easy to see how this symbolizes the first major cracks in the foundations of a system primed for change. But a full change hasn’t come yet. And until it does, medical refugees will exist.

While some states embrace legalization, others stagnate under the weight of century-old beliefs around the supposed harms of the cannabis plant. Kentucky is one such state caught in the time warp and stubbornly refuses to rescind its stringent laws.

While the possession or sale of cannabis remains illegal throughout Kentucky, the passing in April 2014 of Senate Bill 124, now allows the use of CBD extracts for medical purposes. But while the benefits of CBD are clear, cannabis is about much more than one single compound. The synergistic nature upon which the plant’s medicinal properties truly unlock becomes apparent with the inclusion of the other plant compounds, and that includes the much-maligned THC.

For medicinal cannabis patients in Kentucky who require THC for their conditions, the only solution is to leave the state. This growing migratory trend of ‘medical refugees’ across state lines represents more chipping away at the foundation.

The tragedy of some of the human suffering involved is distressing to many, and those involved in the movement are quickly becoming some of the most fervent opponents of old laws stemming from Prohibition times.

From Crohn’s Patient to Medical Refugee

Nineteen-year-old “X” began suffering from severe Crohn’s disease by age sixteen. The disease progressed rapidly despite having spent the better part of her teenage years in and out of hospital. Eventually, it got to the point where she was unable to eat or drink. The pain from the inflammation was so severe.

Crohn’s is a bowel disease caused by gross inflammation of the digestive tract. It can affect all regions of the gut and cause symptoms such as severe abdominal pain, diarrhea, weight loss, and lethargy. Malnutrition is a common problem as the disease worsens over time, and it can eventually lead to serious complications.

Suffering from a lack of appetite, and with a gut so inflamed that she wasn’t able to absorb nutrients effectively, she slowly drifted towards death. And when the pharmaceutical interventions prescribed didn’t provide respite, she turned to cannabis.

After watching her daughter wither away under severe pain and inflammation, X’s mother insisted on cannabis. After reading anecdotal reports backed by research to support a trial of cannabis oil, X’s mother decided to give it a try.

She dosed every four hours, and by the third day, her pain started to fade and her appetite returned. X went from being in malnourished agony to eating after only four days on cannabis.

The tragic side of the story becomes apparent upon hearing what the family had to do to obtain effective medicine. In an illegal act that could land them in prison, they had to regularly travel outside of Kentucky to obtain it. But they are no exception, and tales like this from other medical refugees are all too common in the hold-out states.

Poor appetite is common in many illnesses and is also a typical side effect of many medical interventions. While cannabis induces appetite and helps patients nourish themselves as their bodies slowly rebuild after a debilitating illness, few understand the mechanisms of action.

A study [1]Society for the Study of Ingestive Behavior. (2018, July 17). How cannabis affects appetite: Brain changes. ScienceDaily. Retrieved June 10, 2020 from … Continue reading published by the Society for the Study of Ingestive Behavior (2018) found the THC⁠ — the all too commonly illegal compound in many states⁠ — to be “valuable” in stimulating appetite. Researchers found that THC acts on ghrelin⁠—a hormone that’s naturally released when the body senses it’s time to eat. Once released, the hypothalamus senses its presence and changes “the genetic activity of brain cells that respond to the hormone.”

But Crohn’s disease is about much more than appetite stimulation. There’s also the pain and the rampant inflammation. This is where the true value of cannabis becomes apparent with its multi-pronged approach to healing. Cannabidiol (CBD) is a powerful anti-inflammatory, THC also serves to provide pain relief, and the myriad of terpenes and minor cannabinoids all serve to enhance the healing properties via the entourage effect.

They administered 115 mg of THC in flower form twice daily. The findings surpassed expectations. The researchers found that “THC-rich cannabis produced significant clinical, steroid-free benefits to 10 of 11 patients with active Crohn’s disease, compared with placebo, without side effects.”

The tragedy for many is that they must become medical refugees and rely on out-of-state dispensaries or black market dealers to obtain such benefits. 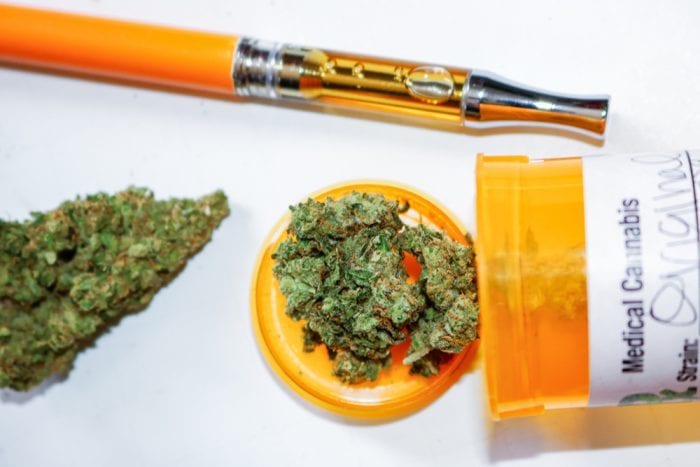 The old adage of science progressing one funeral at a time still holds true to many. But the truth is that the scientific understanding of the cannabis plant is more complete than it has ever been. The same can’t be said for political policies. Many of them act out a narrative that’s still influenced by the gross misunderstandings from times of Prohibition rather than reevaluating the evidence to best protect citizens.

Things do appear to be moving slowly in the right direction in the legislative chambers of Kentucky though. House Bill 136 received the support of retired district judge Rob Wiederstein, and the bill had a landslide seventy-one percent win with both Republicans and Democrats supporting it.

The poisoning of the public psyche during the years of Prohibition still holds firm at the top. But, many are slowly loosening their grip on old, outdated beliefs. Rep. Senator Robby Mills weighed in recently. He reported to The Gleaner: “While I understand this is a very emotional issue for some, I do not believe politicians should be deciding what medicine is and what medicine is not.”

RELATED  The Tobacco Pipe Used To Be A Symbol Of Healing

Mills went on to emphasize the importance of sticking with the usual drug approval process. He stands by the FDA standards. He cited the detrimental effects, both physical and mental, that are associated – rightly or wrongly – with the abuse of cannabis as reasons for his reservations. Further, he also intimated that should the FDA approve the use of medical cannabis; he would have no qualms in fully supporting the bill.

The Slow Awakening to What Medicine Is

Crohn’s disease is by no means the only disease that cannabis is an effective treatment for. Science is still uncovering the many medicinal properties of the plant. Every day we learn more about the myriad of conditions it may treat or help manage. But legislation must evolve in kind. Old beliefs are hard to shift. But it’s the resistance to letting them go that determines how fast federal legalization comes about. It determines how soon medical refugees will become a thing of the past.