Buddy came to me abused and broken. Now he’s a CBD dog.

I would be happy to share my experience giving CBD oil to my dog. I am a retired RN and a proponent of legalizing cannabis, which I believe has tremendous value in medicine. Anyways, here’s how CBD oil has helped my big guy.

One day, a utility worker just happened to see two dogs chained up in a field next to a deserted trailer. He could not take the dogs home with him. So, he was driving 40 miles round trip after he got off work every day to give them food and water.

A rescue volunteer asked me if I would take food and water to them as I lived closer. So, my husband and I drove to where the dogs were. My heart broke when I saw them.

They both had very large, heavy, chains around their necks. And they were tethered to dog houses. The weather was in the mid 90s and the poor dogs were tangled up tightly together. Both had raw, bleeding, lesions on them from the chains.

There was no way I could leave them in such a shape so I brought them home with me. My sister took the smaller terrier mix, and I kept the Great Pyrenees. Soon after, we named him Buddy.

Only CBD Helped This Canine

After I had him for about a year is when he began gagging, hacking, and coughing.

The vet did blood tests, X-rays and physical exams, but nothing out of the ordinary was found. The medicine I can recall that we gave him were antibiotics, steroids, Lasix, and Benadryl. Nothing helped.

His symptoms were 24 hours a day, for three years. About a year ago one of my FB friends told me about her physician giving her a sample of CBD gel for her foot and leg neuropathy, and she said it did help her.

Another friend, an RN, joined in the conversation, and said she was using CBD oil for her back pain and was able to quit taking narcotic meds. She also mentioned that she was giving it to her dog. Both friends recommended Charlotte’s Web. 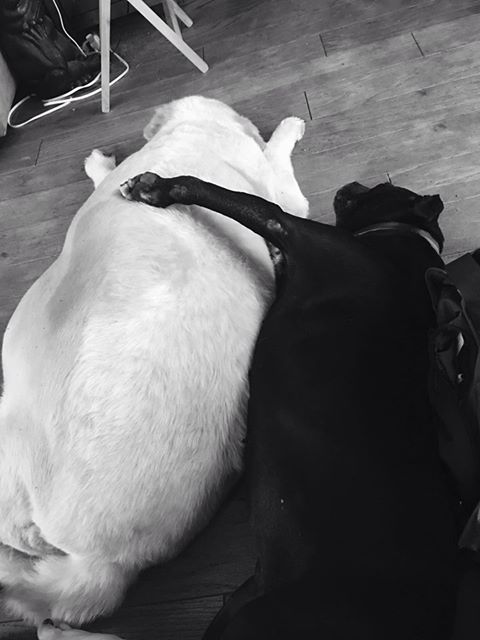 Buddy and his Pit Bull sister cuddled up for an afternoon nap.

CBD Oil – For Dog and Owner

I ordered the gel for my arthritic knees, and oil for Buddy. I began by putting one drop of CBD oil in his canned dog food each morning. Then, I gradually increased the dosage to 10 drops when his symptoms completely went away.

That is the dosage I have given him for several months now. To sum it up in one sentence, My 150 lb Great Pyrenees no longer suffers from the gagging, hacking and coughing that plagued him for three years.

This is all thanks to the wonders of CBD oil. I want to add that, in my opinion as a nurse, the problems he had were due to injuries to his throat from the chain around his neck. I am sure there is no permanent cure, so I will continue giving him the CBD oil because it is the only thing that has helped him. 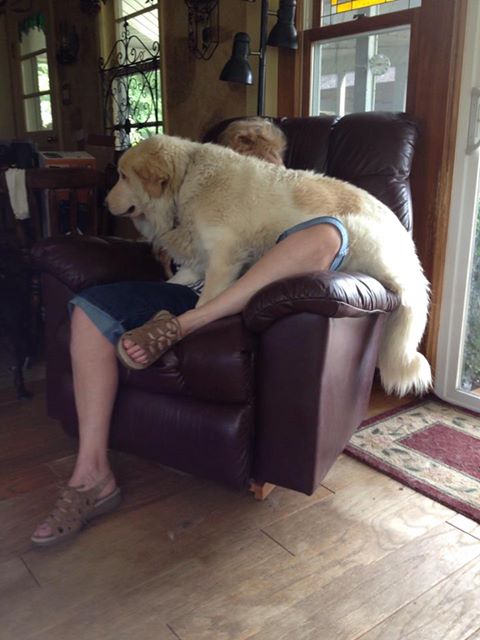 From RxLeaf: CBD Oil for Dogs

Finding that a beloved furry friend is sick is terrible. However, in some cases, it doesn’t have to be. The anti-inflammatory effects of CBD can benefit a dog in the same way it does humans. One recent study found that arthritic dogs had significantly increased activity scores, and no side effects, from administration of a CBD oil. Meanwhile, other studies are looking at CBD as an aide in fighting canine bladder cancer. Note that this administration should be done with care. Always speak to your veterinarian before trying any new medicine on your pets.

Take extreme care if giving cannabis to dogs. Further, current science suggests that giving pets THC is a very bad idea. A recent study, published in the Canadian Veterinary Journal (2016) shows that dogs actually have “a higher number of cannabinoid receptors in the brain compared with humans.” This means that they are more susceptible to the intoxicating effects of the cannabinoid. Think of it this way – would you give a lot of THC rich cannabis to a friend, without telling them they were going to feel? Hopefully the answer is no.

This means that a pet owner looking to treat a canine should also consider what CBD oil they are giving their dog. Proof of authenticity and lack of THC are essential. This means you might want to go to the dispensary, rather than the gas station, when looking to help your furry friend. Further, its always best to seek out options with a licensed veterinarian, first and foremost. A good one will be up to date on the latest studies on cannabis and dogs.