Is PHO Wax the New King of Dabs?

This is why PHO wax is superior to BHO wax.

There’s a new phenomenon setting the cannabis world on fire: PHO wax. If it seems to you like the Next Big Thing is popping up a lot lately, you’re right. The rapidly expanding legalized market is catching up to where it could’ve (and should’ve) been years ago, and all we can do is hang on for the ride. But what separates PHO wax from the standard “Next Big Thing” is that it’s not a glaringly big change. It’s far more subtle.

Like the name implies, PHO wax is a kind of cannabis wax. Perhaps unsurprisingly, it’s closely related to BHO wax. You can think of it as BHO 2.0. It has a slightly modified and improved formula that’s at once more potent and richer in minor cannabinoids.

What is PHO Wax?

Manufacturers use propane to gently pull active compounds out of raw plant material. Those ingredients include THC, CBD, and hundreds of terpenes. It’s called an improvement over BHO because it pulls out more cannabinoids and terpenes from the plant matter than BHO does. And it does it better.

BHO stands for Butane Hash Oil. It is still widely popular among patients in the cannabis community. While it may not extract quite as many terpenes as PHO, the older method is superior in at least one way. Because of the chemical nature of butane, manufacturers can turn BHO wax into a variety of final products. These include oil, shatter, crumble wax, and budder.

PHO extraction, on the other hand, usually leads to a substance close to budder. That’s not to say it can’t be made into other kinds of wax, but it’s usually not.

What’s So Special About PHO?

So it’s a little bit better than BHO. That doesn’t sound like something that should ignite passion across cannabis space. But it is. And here’s why.

PHO is more potent than BHO. It has a THC content between 70 and 90 percent. That makes it one of the most efficient THC delivery systems on the market today. And, thanks to a much richer terpene profile, PHO wax provides a slew of additional benefits over BHO.

Together, these factors make PHO wax appealing for people with chronic pain or who desire maximum health benefits from their cannabis.

It’s also crazy smooth. The buttery texture of PHO is unlike anything you’ve dealt with before. Its easy softness makes PHO ideal for dabbers — and for people who desire strong, healthy edibles. While it’s currently most in demand among the dab crowd, there’s little doubt that its future lies in its spreadability. Think of the possibilities for cookies, granola bars, and other treats.

Much like its butane cousin, manufacturers create PHO wax with a wash-and-purify system. It begins with the basic materials: ground cannabis plant matter, a little bit of water, and liquid propane. Manufacturers combine these ingredients together long enough so that the chemical reactions pull out most of the plant’s cannabinoids.

Once that’s complete, the solution is filtered to remove any impurities that might have snuck through with the propane or cannabis. The result is then exposed to heat to evaporate out the propane solvent, which is used again later. 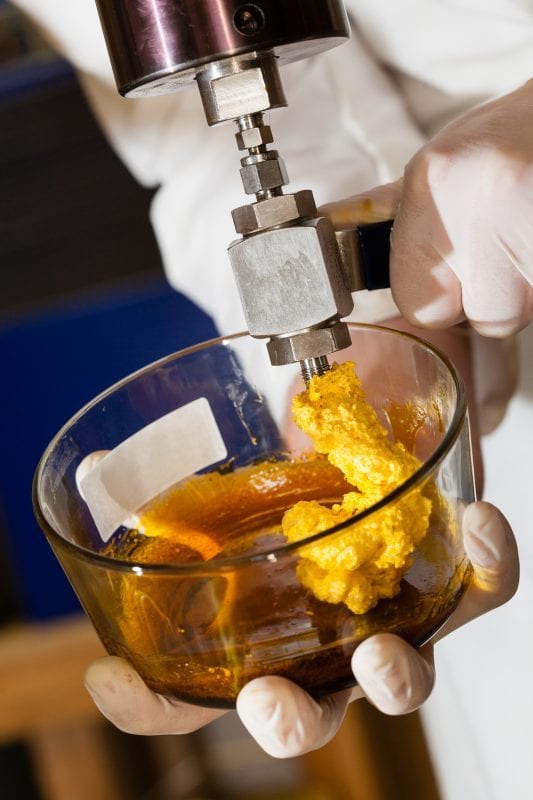 Finally, manufacturers put the mixture into a vacuum oven to blast away the final bit of propane. Once it’s clean, the only thing left is to decide what kind of wax it will be. And, as we covered before, that usually amounts to budder.

*Special note: Although this sounds very similar to ethanol extraction, the process is fairly intense. It requires a lot of safety training and should be left to cannabis extraction professionals. Home extractors should stick to ethanol.

PHO wax is a healthier, punchier version of BHO wax. It’s a great addition to joints, edibles, dabs, and topping off a bowl. But no matter how you consume PHO, remember that it’s extremely powerful medicine and proceed with caution.

BHO wax has led to adverse effects in some dabbers, which might be from the wax itself or from an unclean purifying process. So far, PHO does not have any scientifically documented negative side effects. But it always pays to consider where your wax comes from.

Moreover, dabbing has a reputation as the extreme version of cannabis consumption, and for good reason. Now that there’s an even more potent version of wax on the market, it’s vital that wax or dab newbies take extra caution when using PHO for the first time. Double-check its pedigree with your budtender.

While PHO has exceptional medicinal value, medical journals have yet to publish test results. So how well this product’s high-THC delivery systems fights diseases and wards off sickness is yet to be determined.